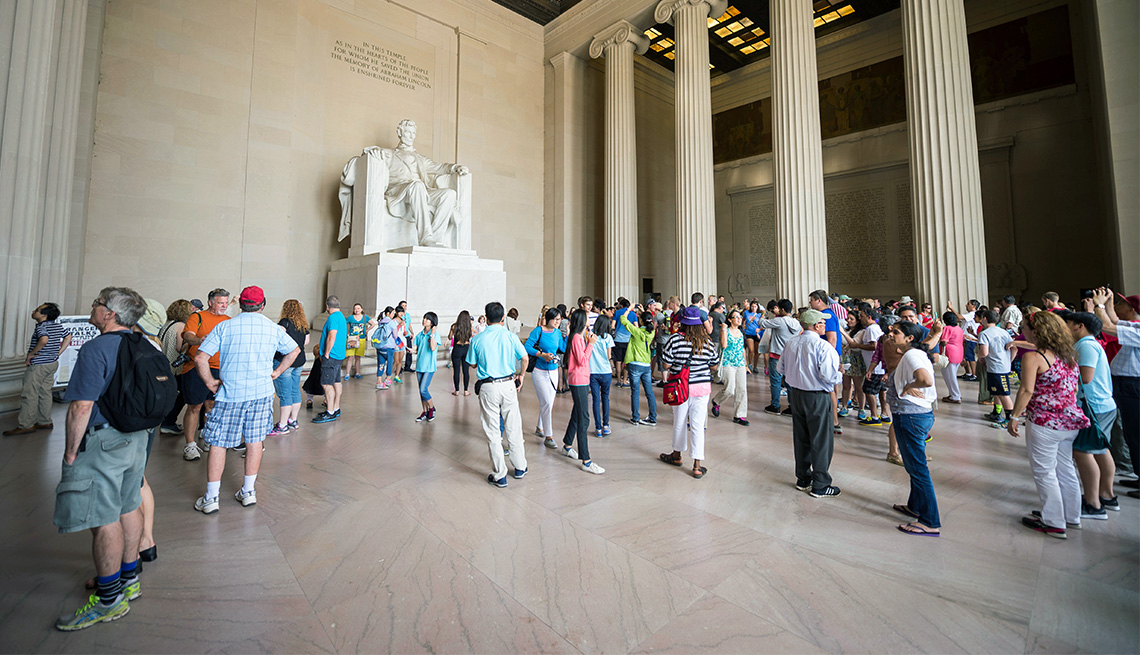 En español | Pack your Fitbit. The city is small and flat, with many popular attractions clustered together. Set alongside the Potomac River, which has walking trails on both sides, it’s also one of the world’s most beautiful cities: green, clean, graced with acres of white marble and comfortably low-rise, thanks to a building height limit of 110 feet.

The oldest and largest urban park in the U.S., Rock Creek Park (D.C.’s version of Central Park) weaves right through the city along a 32-mile trail system that draws joggers, bikers and even horseback riders. It’s home to the Smithsonian’s National Zoo (panda central!), which is great for family outings and only a short Metro ride from downtown. In the early mornings and late evenings, you may hear a lion’s roar — really.

To get your bearings: The city is laid out in four quadrants, but it’s really a city of delightfully walkable neighborhoods, each with its own character and identity. A stroll along the tree-lined National Mall — an expansive grassy area where residents lounge and toss Frisbees — will take you from the Lincoln Memorial to the Capitol. It’s easy to get in your daily 10,000 steps here.

Wander past Capitol Hill’s stately historic town houses in the shadow of D.C.’s political epicenter and you could run into a member of Congress. There and in downtown, you’ll witness the unique D.C. bustle of congressional staffers, deadlining journalists, lobbyists and activists on their way to work — habituated to the storied regality of their city’s streets. After getting lost in the stacks of the Library of Congress and the Folger Shakespeare Library, come up for air in revitalized mini-neighborhood Barrack’s Row, where the spirit of D.C.’s maritime history is preserved.

Many neighborhoods are within walking distance of the mall, such as D.C.’s tiny but vibrant Chinatown (also called Penn Quarter). It boasts such landmarks as the National PortraitGallery (don’t skip the new portraits of Barack and Michelle Obama), Ford’s Theatre and the Capital One Arena, as well as Asian-style restaurants from big-name chefs (China Chilcano, Peruvian-Asian fusion by José Andrés) and cheap takeout.

South of the mall you’ll find the District Wharf, a newly revitalized mile-long waterfront along the Potomac River that has attracted hot chefs such as Kwame Onwuachi and Mike Isabella, plus shops and three new hotels.

For bistros, boutiques and bars, head to lively Dupont Circle, home to the Phillips Collection and a landmark fountain perpetually surrounded by chess players and bench sitters (great people-watching, anyone?). Sample local cheeses, craft beer and baked goods at the hopping Sunday farmers market, one of an estimated 200 in the city. Nearby, count the flags of many countries as you stroll up elegant Embassy Row (Massachusetts Avenue), and pause at D.C.’s version of the Spanish Steps, tucked into an out-of-the-way cul-de-sac.

Not far away are Georgetown’s historic streets, made for shopping, and Southern Federal-style row houses, such as the one where John and Jackie Kennedy lived (3307 N St.). Take a quiet respite at one of the loveliest gardens in the city at Dumbarton Oaks. Or saunter along the path-lined C&O Canal (currently being restored), abutting low-slung brick buildings that recall Georgetown’s colonial past.

Just a few miles north of Georgetown, get an unparalleled 360-degree view of the city from its highest point in the Washington National Cathedral, site of funeral and memorial services for 21 U.S. presidents. Stop and smell the roses in Washington’s own version of “the secret garden,” the tranquil Bishop’s Garden, dotted with benches and a shady gazebo. (The cathedral is wheelchair accessible, but the garden paths have uneven stones with some steps.)

Ways to save: Those 65 and older save $4 on admission to the Washington National Cathedral.

It’s likely why you come — the essential timeline of American history and culture in the form of museums, memorials and monuments. You could spend weeks touring them all and wear out a pair of shoes. The National Mall and Memorial Parks stretches for almost two miles between the Lincoln Memorial and the Capitol, with the Washington Monument at its center. Here are elegant and inspiring memorials to Thomas Jefferson, Franklin Delano Roosevelt and Martin Luther King Jr., and to veterans of the Korean War, the Vietnam War and World War II. In the National Archives Rotunda, you can see the Declaration of Independence, the Constitution and the Bill of Rights; just be prepared to wait in long lines to enter (wheelchairs are provided).

All Smithsonian venues accommodate visitors with mobility, hearing and sight impairments. You can even reserve free sign-language tours with a trained docent at least two weeks in advance. Wheelchairs are available for rent on the Mall, and you can download an accessible entrance map.

While the Mall boasts several art museums — notably the landmark National Gallery of Art with its I.M. Pei–designed East Building, the modern-art-filled Hirshhorn Museum and Sculpture Garden, and the Freer/Sackler galleries for Asian art — locals have favorites well beyond the mall. In Dupont Circle, the Phillips Collection has an impressive collection of Impressionist and post-Impressionist art (feast on Renoir’s famous Luncheon of the Boating Party). In a Georgetown mansion, Dumbarton Oaks boasts America’s premier collection of pre-Columbian art. Lovers of folk art enjoy the Renwick Gallery, across from the White House, and those who favor decorative arts, the Hillwood Estate, Museum and Gardens overlooking Rock Creek Park, with its rare, gold-and-jewel-covered Fabergé eggs.

History gems are scattered all over, such as the Frederick Douglas National Historic Site, the William H. Seward House (known as Mr. Lincoln’s White House) and Mount Vernon, George Washington’s restored estate in a Virginia suburb. (Mount Vernon is wheelchair accessible except for the mansion’s upper floors and provides handheld devices for the visually and hearing impaired.)

In a city devoted to memorials, you can hardly turn a corner without running into one, even beyond the mall. Statues of Einstein, Churchill, Gandhi, Kahlil Gibran and even Mary Magdalene dot the city. Two memorials are located in Virginia: the soaring Air Force Memorial and the iconic Marine Corps War Memorial (better known as the Iwo Jima memorial), just outside of Arlington National Cemetery — the country’s largest military burial ground. The cemetery offers free shuttle service to visit individual grave sites.

Ways to save: Talk about the land of the free! All the Smithsonian museums are gratis, as are others on the Mall, including the National Gallery of Art and the National Archives, and most other public venues around town. Throughout the year you can catch free live music in the Smithsonian American Art Museum at a monthly event called Luce Unplugged — if the band doesn’t attract you, then the no-charge drink samples will.

Visitors 62 and older save $2 on admission to the Phillips Collection, Dumbarton Oaks is free, and Hillwood requests a suggested donation. Those 65-plus get discounted tours of Arlington National Cemetery, and the disabled can ride the interpretative bus at no cost (with one companion). Those 62-plus get discounted tickets to Mount Vernon, additionally discounted if bought online.

Befitting a city steeped in political intrigue, fascinating stories and history tidbits abound, and a guided tour is the best way to get schooled. Narrated, hop-on hop-off tours, like Big Bus (wheelchair accessible; book 48 hours in advance) and Old Town Trolley (some accommodate wheelchairs), show you a lot in a short time, such as the U.S. Capitol, the Supreme Court, the Lincoln Memorial, Vietnam Veterans and WW II memorials, and several Smithsonian museums.

Bike-tour companies such as Bike and Roll (which also features Segway tours) are popular, especially as the “cyclability” of the city has increased.

Numerous companies offer walking tours of the Mall and major attractions, plus themed tours around Abraham Lincoln, architecture, military history, African American history and more. Make sure you tour at least one of the monuments at night. Not only are they majestic while bathed in warm light, but crowds thin out then and park rangers are on site until 10 p.m.

Foodies can indulge their passion, too. DC Metro Food Tours, Carpe DC and Mangia DC all put a unique spin on classic neighborhoods, with a day full of history, culture, music and, of course, tastings. There are hidden culinary gems everywhere — U Street, Adams Morgan, Dupont Circle — in the form of baked goods and fresh-out-of-the-tap beer.

For those who can’t walk great distances and for the mobility-impaired, tours of the Mall and major sites with an at-your-own-pace pedicab or a five-person electric cart are great.

Ways to save: Reserve a free tour of the Mall and monuments with a National Park Service ranger. Free Tours by Foot offer name-your-own-price walking tours of the National Mall, Arlington National Cemetery, Capitol Hill, Embassy Row/Dupont Circle, Georgetown and more, as well as self-guided audio tours. Name your price on DC by Foot’s food tours, which lead you to the best places to sample. A tip is a small price to pay for a full stomach.

You can create your own tour hacks if you can live without the guided commentary: Water taxis (wheelchair accessible) are cheap and available at Georgetown and the Wharf, in addition to the National Mall; grab a window seat on the Circulator National Mall bus route (wheelchair accessible), which hits many of the spots the bus tours do; or pick up a bike at a docking station from Capital Bikeshare and pedal around the monuments for $2 for 30 minutes or $8 for 24 hours.

D.C. proper has more live theaters than movie theaters. The Kennedy Center, a 3,700-ton marble testament to John F. Kennedy’s advocacy of “the human spirit,” is an international beacon for performing arts and home to the National Symphony Orchestra and the Washington National Opera. You can catch anything from a Tony-winning musical to an intimate jazz set. Ford’s Theatre is not only the site of the most infamous assassination in American history but is also still an active playhouse, focusing on American classics and historical dramas. Pair a guided investigative tour with a one-act that deconstructs the crime. The National Theatre has been putting on hit shows for nearly 200 years. And it has something for the grandkids, too: It invites the whole family for puppet shows, dancing and performances every Saturday morning at 9:30 and 11. Other theaters host top-notch performances across the city, including the Atlas Performing Arts Center, Studio Theatre, Arena Stage (exclusively American productions), Warner Theatre (music, dance and plays) and the Folger Theatre (part of the Folger Shakespeare Library). All are wheelchair accessible and offer assisted-listening devices.

Ways to save: No ticket? No problem. Every day at 6 p.m. the Kennedy Center offers free performances on its Millennium Stage. It also has a limited number of tickets at 50 percent off for people 65-plus and the disabled on a first-come, first-served basis. Ford’s Theatre gives those 60 and older discounted fares to many weekday and weekend matinees. Those who are 62 and older receive a $5 discount at Studio Theatre, and those 65-plus get $10 off at the Folger Theatre. Arena Stage sells some half-price tickets at the box office half an hour before curtain. Ticket discounters include Goldstar and TodayTix.