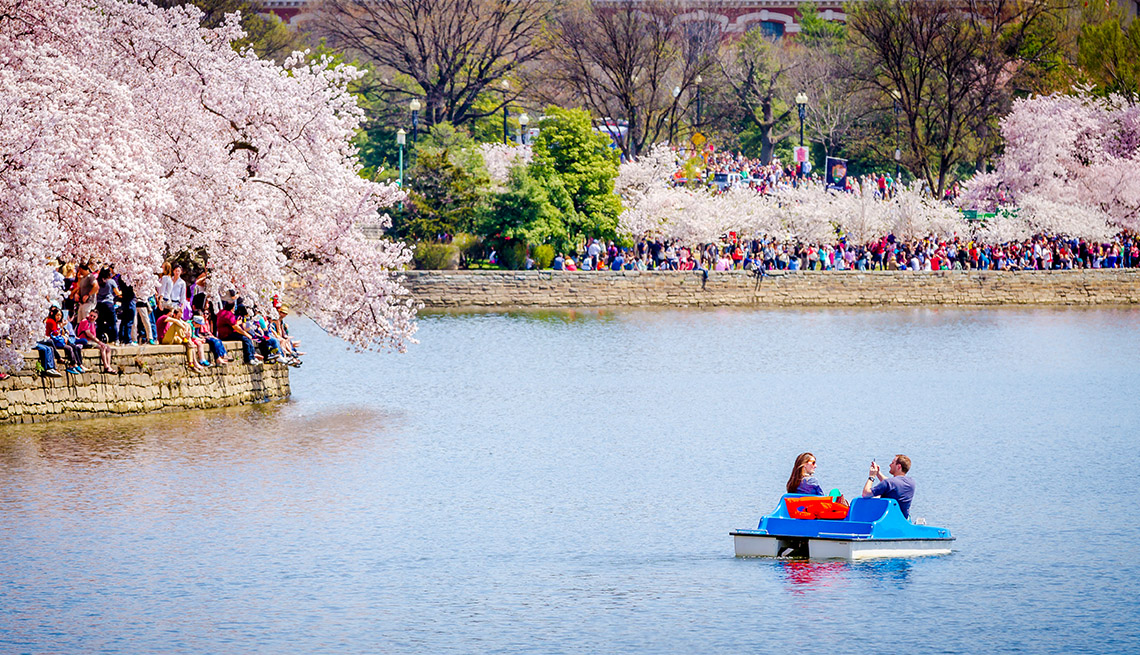 In D.C., heat waves and cool spells roll in year round, with 90-degree-plus weather and smothering humidity common in July and August and high 30s to low 40s in winter. Planning your trip will depend not only on the weather, but also on the political and festival seasons. Crowds appear along with the city’s famous cherry blossoms in March and April, and numbers climb until August, when Congress goes on recess and the sweltering weather clears out the city of commuters. Check the events calendar for any big demonstrations, as they can have an impact on your movement; a few rallies occur annually, like Rolling Thunder on Memorial Day. Spring and fall often bring ideal weather, albeit with high pollen counts in spring.

Ways to save: Score a deal by visiting in winter, when flights and hotels are cheapest and the city is festooned in lights and holiday trimmings (December) and restaurants offer affordable prix-fixe menus for Restaurant Week (January).

It’s easy to sleep where scoundrels, spies or presidents once lingered. Whether it’s the Watergate Hotel (site of the country's biggest political scandal), the Mayflower (a favorite lunch spot of FBI director J. Edgar Hoover) or the Willard Hotel (where President Abraham Lincoln stayed during his inauguration), much of D.C. lodging exudes history. Take two legendary 1920s grand dames: the Hay-Adams, with its coveted perch on Lafayette Square across from the White House (you can practically peep into its windows from the rooftop bar) and the Jefferson, a Beaux Arts beauty just down the street from the Hay-Adams. The Hay-Adams was constructed at the site of the homes of two prominent Washingtonians — John Hay and Henry Adams. John Hay's many roles included personal assistant to President Lincoln, a U.S. ambassador and Secretary of State under Presidents William McKinley and Theodore Roosevelt. Henry Adams was a historian and a descendant of Presidents John Adams and John Quincy Adams. The Jefferson was once a tony apartment building that was transformed into a hotel; named after and whose style was influenced by President Thomas Jefferson.

When looking for accommodations, consider the neighborhood and access to a Metro subway station: Dupont Circle, Penn Quarter/Chinatown and Foggy Bottom are all centrally located and accessible. No matter the neighborhood, there are are plenty of choices in each, from high-end to affordable, such as the Hampton Inn near the White House, the Hilton Garden Inn and Holiday Inn Washington-Capitol, near the Capitol, and the Hyatt Place Washington DC.

Ways to save: Accommodations are cheaper on weekends, when business travelers have departed, and during the off-season (fall and winter). You can also save at chain hotels, inns or in rentals from HomeAway and VRBO, or in one of Airbnb’s 7,800 listings, where a one-bedroom apartment goes for $80 to $100 a night in a desirable neighborhood like Dupont Circle. Another way to save is to stay outside the city in neighboring Maryland (Bethesda and Silver Spring) or Virginia (Rosslyn, Alexandria and Arlington) suburbs. These locations offer lower-priced hotels, easy access to the city via the Metro subway system, as well as restaurants, shops and entertainment. The price range for a three- or four-star hotel is $100 to $250. The standard rate for the four-star Renaissance Arlington Capital View, which includes a free shuttle to the Metro, is $129 to $159 a night. As far as time spent getting in to the city, Roslyn is just three stops (six minutes during slack time) to the White House. Bethesda is nine stops (at least 18 minutes) to the city center. Along this route you'll also have access to some popular D.C. neighborhoods like Dupont Circle and Woodley Park/National Zoo — both worth a visit for their unique attractions. Silver Spring is nine stops (21 minutes or more) to the city center. On this route, you can drop by Union Station on your way to the National Mall. Also, take advantage of Metro's discounted senior fares. That trip from Rosslyn to the White House? Only $1.10.

How to get there

Planes, trains and automobiles. Three airports, a historic train station (and bus depot) and the East Coast connector Interstate 95 make Washington easy to get to. Virginia’s Ronald Reagan Washington National Airport (DCA) is closest to downtown, followed by Virginia’s Dulles International Airport (IAD), a 45-minute drive, and Baltimore-Washington Thurgood Marshall International Airport (BWI), an hour’s drive. Reagan is the only one directly accessible by Metro. Union Station is the Amtrak hub, with multiple trains a day running between D.C. and Boston to the north and Tampa and Miami to the south. Amtrak easily connects to the area's 118-mile subway system, aka Metro. Union Station is also a hub for inexpensive buses to and from New York, Philadelphia and Baltimore.

Ways to save: Instead of taking a cab to your D.C. destination, you can take a less-expensive shared SuperShuttle van (wheelchair accessible). Or hail a ride with Uber or Lyft.

Activities to arrange before you go

The best thing about visiting D.C. is that so much is free. Museums on the National Mall — such as the Natural History Museum, with its dinosaur skeletons, and the American History Museum, where you will find the Star-Spangled Banner — cost nothing, though in peak periods you may have to wait in line to enter. While such attractions are open to all on a same-day basis, some require planning. It takes a member of Congress to arrange a White House visit, so contact your representative months in advance to reserve a space on one of the tours that take place. The U.S. Capitol, the Holocaust Memorial Museum and the Washington Monument (closed until 2019) offer advance tickets, so you can saunter past same-day ticketing lines. For the U.S. Capitol, make reservations through your member of Congress or online. Holocaust Memorial Museum tickets can be ordered online. They are free with a minimal service charge. The U.S. Supreme Court accepts visitors on a first-come, first-served basis with no reservations available. As of April 2018, the red-hot National Museum of African American History and Culture still required timed entry passes; book yours in advance at its website. A limited number of same-day online tickets and walk-ups (weekends only) are also available. At Ford’s Theatre, the historic venue where President Lincoln was shot, tours can be reserved in advance to guarantee access. Buy advance tickets for hit shows at Ford’s (it's still a working theater), the Kennedy Center, National Theatre or Warner Theatre to ensure a seat for these acclaimed stages.

Ways to save: Save up to 40 percent with a Washington DC Explorer Pass, where you can create a customized package for up to five attractions. Book in advance at the Newseum (an interactive museum about the press) and Madame Tussauds to get a discount. The Newseum offers a discounted rate of $19.95 for ages 65 and older.

D.C. is a white-collar town: Weekdays, power suits and business dresses still walk the halls of Congressional buildings, but more common elsewhere are Oxford shirts and pants for men (with or without a tie) and casual skirts or slacks for women. If you are visiting, dress comfortably, but avoid T-shirts and shorts if you want to blend in with the working crowd. After all, attractions such as the White House, the Capitol Building and the Pentagon are also office buildings. The Mall is bigger than it looks — 2.7 miles from end to end — so comfortable shoes are a must.

The tourist areas, like the Mall, are quite safe, with city, park and Capitol Hill police present and visible. (A 2015 report found that D.C. was the most policed city in the country.) Robberies in the city were down 27 percent in 2017 and violent crime, 22 percent. Still, pack your street smarts. Avoid carrying dangling purses or bags, and keep smartphones and wallets secure. The District often hosts protests and rallies, which can range from small to very large. Stay tuned to local media that can tell you what to expect, especially in the case of marches where large crowds are expected.