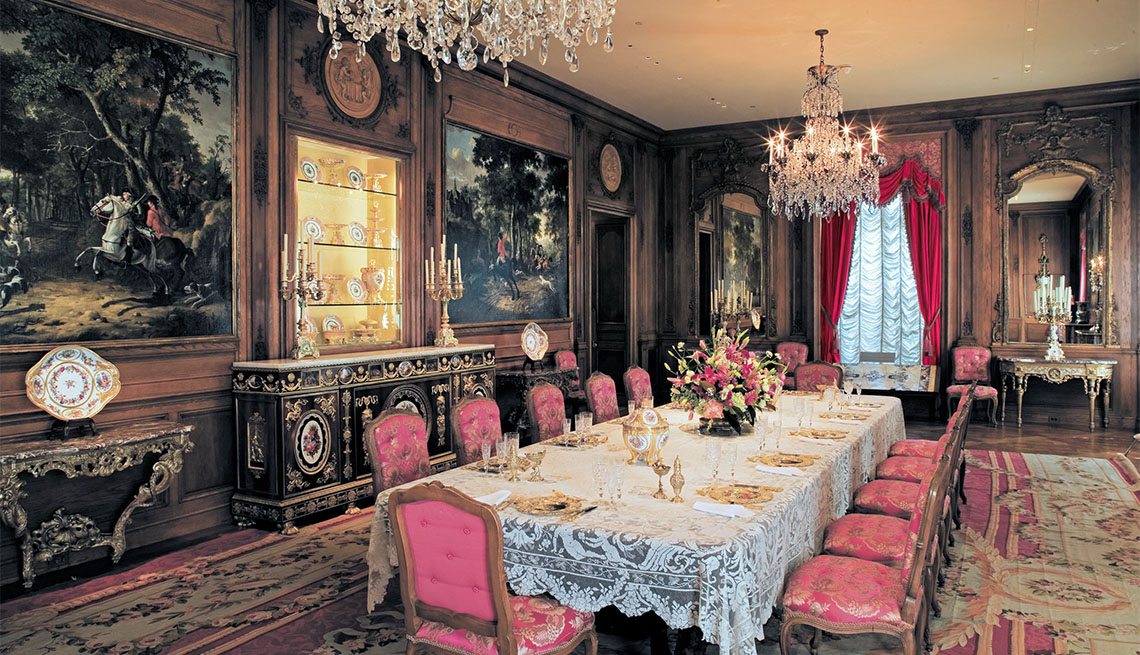 Those enormous museums lining the Mall in Washington, D.C., get all the attention — and the crowds — but don’t miss these eclectic gems in and around the Nation’s Capital. Follow your passion — from art and design to science and technology — at these specialized collections. (Unless otherwise noted, all are free.)

If the Easter Bunny were a billionaire, he’d live in this 36-room mansion with its two rare, gold-and-jewel-covered Fabergéeggs. No yolk: Thousands of visitors a year view the collection of more than 17,000 pieces of European jewelry, ceramics, furniture and art objects in cereal heiress Marjorie Merriweather Post’s former estate, overlooking Rock Creek Park. (Discounts for those 65 and up.)

It looks like a magnificent brownstone mansion, but when built in the 1850s this art gallery across from the White House was known as America’s Louvre. Today it houses the Smithsonian’s collection of contemporary American craft art. Do not miss Wendell Castle’s mind-bending wood sculpture Ghost Clock — an uncanny representation of a grandfather clock wrapped in a shroud.

In 1944, world leaders gathered here to create the United Nations; now the Georgetown mansion houses an extensive collection of Asian, European and American art, especially of the Byzantine period. An adjacent building designed by Philip Johnson is home to one of America’s premier collections of pre-Columbian artifacts. Stop by the Rare Book Room and browse the Autograph Letter Collection, with signatures from assorted luminaries, from Victor Hugo to Charles Dickens.

It’s the museum where history is made out of whole cloth: Since 1925, textile enthusiasts have pored over the museum’s Oriental rugs, indigenous American tunics and medieval tapestries, along with some textile fragments dating back 5,000 years. The collection of more than 20,000 pieces moved to the Foggy Bottom campus of George Washington University in 2015.

As you’d expect, the Daughters of the American Revolution have collected some really old Americana for their museum, including quilts, antique pocket watches and items belonging to Thomas Jefferson. Do not miss the museum’s 31 period rooms, each decorated with furniture and furnishings from 1690 to 1935 — and each like a portal to another age.

Neither rain nor sleet should keep you from this fun and easy-to-cover museum right next to D.C.’s Union Station. You can take a quick look at the mail plane and stagecoach in the main gallery, then scratch the surface of the museum’s stamp collection with a glimpse of the rarest stamp of all: the priceless 1918 “Inverted Jenny” stamp, with an upside-down biplane.

National Museum of Health and Medicine

You’ll have to pop just across the Maryland border to Silver Spring, but there’s no other way to see the U.S. Army’s official medical collection, including battlefield surgical implements, the bullet that killed President Abraham Lincoln (and fragments of his skull), and an actual brain still attached to its spinal cord.

Catch your breath as you enter one of the world’s most dramatic rooms, a vast space with a 75-foot-high ceiling supported by eight colossal Corinthian columns, among the tallest in the world. The Great Hall hosts inaugural balls; the side galleries offer exhibits about architecture. Be sure to see the massive 1930s model of Washington, D.C., used for planning purposes before anyone dreamed of computer models. (Visitors 60-plus get discounts on exhibition tickets.)

In a nondescript building near Dupont Circle, two floors of exhibits trace the history of Jewish soldiers from the Revolutionary War through today. Uniforms, weapons and religious artifacts line the walls, as well as a tribute to Frances Slanger, the only World War II nurse to die from enemy action in Europe.

National Museum of the U.S. Navy

Head to the Washington Navy Yard — next door to the Washington Nationals’ baseball stadium — for this extensive collection covering the history of the U.S. Navy since 1775.  Model ships are everywhere, Navy planes hang from the ceiling, and you’ll even find the bathyscaphe Trieste, the first craft to descend nearly seven miles in the deepest ocean trench on earth.

Visitors to this room, hidden at the back of the Library of Congress’ stately Jefferson Building, can’t help but laugh — and happily, there’s no librarian there to shush them. Temporary exhibits trace the history of entertainment in the U.S., but the heart of the room is Bob Hope’s personal collection of videos and posters — plus searchable computer access to the comic’s 85,000-page joke file.

Forget that journey to Stratford-upon-Avon: A visit to this stately building a block from the U.S. Capitol is like stepping into Elizabethan England. Besides the library’s extensive exhibits of Shakespeare volumes and costumes, down the hall you’ll find an authentic Elizabethan theater. Outside, the scents of Shakespeare’s England waft through an Elizabethan herb garden.

Department of the Interior Museum

When Congress was considering whether to make Yellowstone a national park in 1881, the art of Thomas Moran, who’d visited the area the year before, helped seal the deal. In this small museum in the Interior Department’s C Street headquarters, you’ll see Moran’s dramatic 7-foot-tall oil painting of the Grand Canyon of the Yellowstone — plus an exhibition on movies made at national parks and monuments (including Close Encounters of the Third Kind’s climactic scene at Devil’s Tower National Monument).

No marble hallways or gilt-framed paintings here; instead, this rustic museum in Rock Creek Park features down-and-dirty stuff like real-life live turtles, fish, snakes and an active beehive. It’s also the only National Park Service site with a planetarium. A wheelchair-friendly nature trail leaves from the front door.