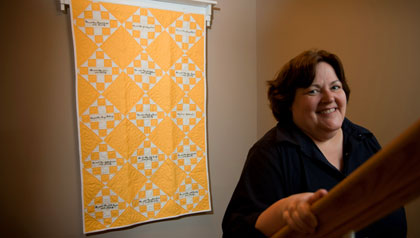 Tracee Hamilton in front of a depression-era quilt that was mailed to her by a stranger, who traced one of the signatures to Hamilton's grandparents.

Sometimes the best genealogical finds are not in public records but in old objects — an address book, a box of surveyor's tools, a set of military dog tags. In my case, I discovered a great deal about my family's history buried in a box at an estate sale halfway across the country.

A woman named Kate Johnson emailed me one day, saying she'd just bought an unfinished quilt at an auction in Julesburg, Colo. My grandparents' names — "Mr. and Mrs. Alvin Lewick" — were embroidered on one block. Kate, a genealogist in Denver, had found me because I had posted my grandparents' obituaries online, along with my email address. She was willing to sell me the half-made quilt and the unused fabric for her cost, plus postage — $14. What a deal! 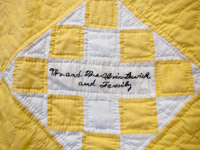 A block of an old signature quilt with the author's family name embroidered on it.

When the quilt arrived, I quickly became obsessed with figuring out exactly when it was made, for whom and by whom.

Based on my knowledge of quilting, I knew this was a friendship or signature quilt, traditionally used to describe one made by a group of women. As I studied the names embroidered on the back, I wondered how those women were connected. Were they members of the same church? Did they live in the same neighborhood?

I recognized the surnames as being from the rural Pleasant Valley neighborhood where my grandparents had begun married life. So I started researching the obituaries for the couples' whose names were on the quilt. An obituary, especially from a small-town newspaper, can be a treasure trove because it typically has all the important dates, plus religious affiliation, educational background, causes of death — in genealogical terms, the works.

Of the couples on the quilt blocks, the most recent marriage had taken place in 1929. The earliest death among those named was 1943. That narrowed the time frame to 14 years. The unused fabric appeared to be what I would call Depression-area material. Because it was irreplaceable, I decided to hand it over to the Vienna (Va.) Quilt Shop, whose experts finished it for me.

That left me to continue the research. Through the obituaries, I was fairly certain I could eliminate the quilt as a church project — the families belonged to several different denominations.

The next clue was the one lone block belonging to a single woman, Miss Eva Whiteside, amid all those married couples. In the most recent federal census available, 1930, Eva was living in the city of Lincoln with her parents, who never farmed in the Pleasant Valley area, as far as I could tell.

On my next trip to Lincoln County, I tried to find a marriage record for Eva. No luck. Then I visited my uncle, Bob Lewick, and mentioned the quilt — and Eva.

"Oh, she was our teacher at Pleasant Valley school for a couple of years," he said. Aha! Uncle Bob, now in his 80s, remembered Eva as teaching around 1934. But I knew that the country school records were available at the Register of Deeds office at the county courthouse, so off I went.

Just like that, the blocks fell into place. Eva might have "commuted" to her teaching job in the country, but during the Depression it seemed unlikely she would have been able to afford a car — or procure the gas necessary to drive back and forth. It was more likely she "lived in" with one or more of the various families of the children in her school. That meant that she either could have joined a women's group and helped make the quilt blocks for someone, or that the mothers of the children in her school made the quilt for her as a thank-you or going-away gift.

In fact, those women might even have made the quilt right there in the school. Uncle Bob also told me that Pleasant Valley included a raised stage at one end, where a quilting frame was often set up. That made perfect sense; in rural areas, a school building also served as a meeting place for social activities such as dances, literary societies — and sewing circles.

So the quilt could now be dated to no earlier than the fall of 1936 to no later than the summer of 1938. The quilt was made by a women's group — either a social group of farm wives or the mothers of the children of the school, although I think, given the use of "Mr. and Mrs. Alvin Lewick" instead of "Emma Lewick" that the latter is more likely. The only question that remains unanswered is the intended recipient — although I have a feeling it was for Eva. It's just a hunch.

No matter. Perhaps someday I'll find the rest of the answers. But every day as I pass the quilt, I think of those women, stitching away on the stage of a country school. I think of my uncles attending that school, and their cousins and friends. And I think of a young single woman trying to make a living during the Depression and being befriended by the farm wives of the neighborhood.

That box of quilt blocks had a lot of stories to tell.