En español | On Aug. 18, 1920, the ratification of the 19th Amendment — which guarantees women equal voting rights — came down to a single tie-breaking vote in the Tennessee Legislature.

Harry T. Burn, a 24-year-old state representative, was up for reelection and under pressure to oppose the amendment, which Congress had passed in 1919 and which required ratification by 36 states.

Tucked away in Burn's suit pocket was a letter from his mother, Febb Burn. “Hurrah and vote for suffrage,” she wrote to her son — and so he did, securing the amendment's ratification in Tennessee and finalizing its passage into law.

Decisive as Burn's vote and the milestones of the suffrage movement may have been, “it is critical to understand that [suffrage] was a movement, not a moment,” says Corinne Porter, curator of the “Rightfully Hers” exhibit at the National Archives Museum, which chronicles decades of suffrage activism.

For historians and voting rights advocates, the 100th anniversary of the 19th Amendment is an opportunity to reflect on the triumphs — and shortcomings — of the suffrage movement as a whole, as well as the challenges to voting rights that persist to this day.

The long road to the 19th Amendment

"This anniversary is our opportunity to share the story of what it really took for women to gain the right to vote,” says Colleen Shogan, senior vice president and director of the David M. Rubenstein Center at the White House Historical Association and vice chair of the Women's Suffrage Centennial Commission.

The story of the 19th Amendment spans more than 70 years of activism in the United States, from the 1848 Seneca Falls Convention until ratification in 1920.

During that time, Shogan says, suffragists not only risked arrest and imprisonment for their activism, but also opposition from the political establishment, the general public (including anti-suffragist women) and industry leaders who feared that voting women would usher in legislation that was bad for business, like a crackdown on child labor. 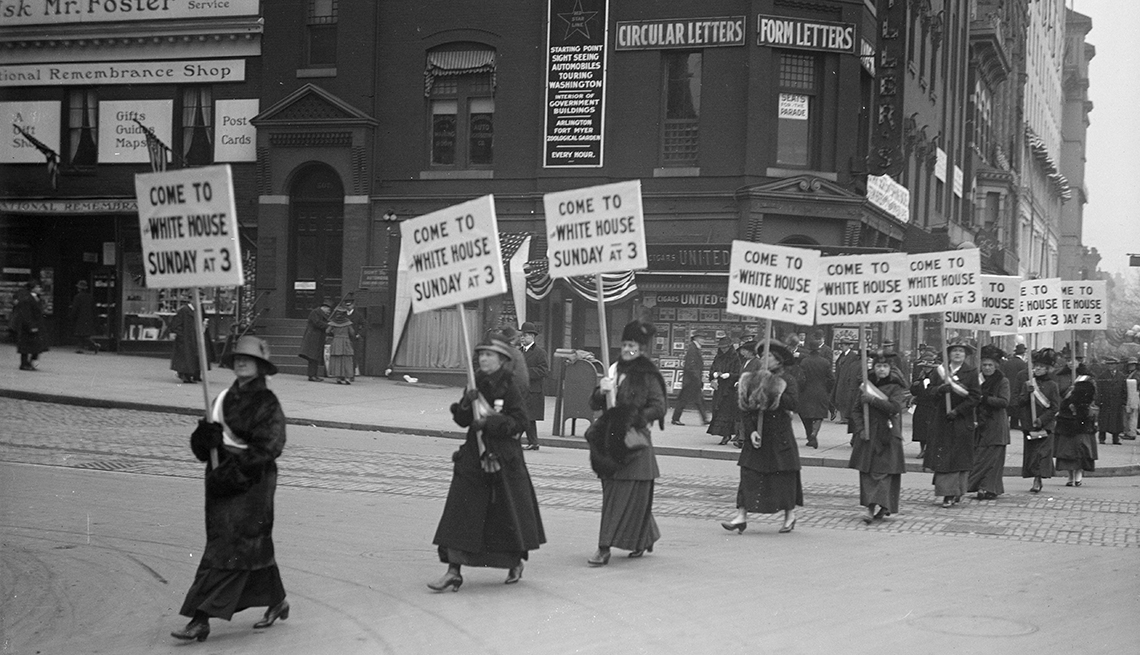 A line of suffragists march with banners in Washington, D.C. in 1915.

The suffragists’ long-awaited victory in 1920, she says, was sweeping: “More people gained the right to vote with the 19th Amendment than with any other changes we have made to the Constitution or in statutes. It's really an incredible moment in American history that many people don't know too much about, except for maybe a sentence or two.”

Experts point out the aspects of the suffrage movement that have long gone ignored or unexamined, like the racism that black suffragists faced within the movement, as well as the failure of the 19th Amendment to extend the vote to all women.

"There's nothing in the 19th Amendment that prevents states from denying women the vote for reasons other than sex,” Porter says. “So, beyond 1920 you see a diverse set of women denied the vote for a multitude of other reasons."

This included women who weren't recognized as U.S. citizens, like many Native American and Asian women, as well as those who didn't live in states, like residents of the District of Columbia and Puerto Rico.

Black women in the Jim Crow South also remained effectively disenfranchised for decades after 1920 (as were black men and people of color more generally) because of discriminatory barriers like literacy tests that wouldn't be fully struck down until the passage of the Voting Rights Act in August 1965.

"While it is important to mark this occasion, it's equally important to recognize that this was the beginning of the fight for the vote, not the end, and the story continued well after 1920,” says Holly Hotchner, president and CEO of the National Women's History Museum, which is offering virtual programming to commemorate the centennial of the 19th Amendment.

For lawyer Barbara Arnwine, chair of the Voting Rights Alliance and founder and president of the Transformative Justice Coalition, acknowledging the struggle for voting rights in the decades following 1920 requires a bit of recalculating when it comes to this year's centennial celebrations.

"I always say that when you consider this anniversary, you have to say ‘plus 45 years,'” she says. “It would take 45 years for women of color — African American women, Latina women, Native American women and Asian women — to really achieve the right to vote.”

The struggle for voting rights today

Even today, Arnwine says, various forms of voter suppression persist — including those that harm older voters in particular, like long lines at polling places or a lack of disability accommodations.

The COVID-19 pandemic is poised to present additional challenges this election year, she says, particularly for older voters who are still self-isolating in their homes or who need help casting a ballot by mail.

Arnwine encourages older voters to take steps to empower themselves in the coming election, like checking to see if they are properly registered, reminding friends and loved ones to do the same, and checking in on their social circles as Election Day nears — something that Arnwine says her own mother, who is 89, excels at.

"The first thing she does is get on the phone. She starts calling everybody she knows and says, ‘Are you voting today?'"