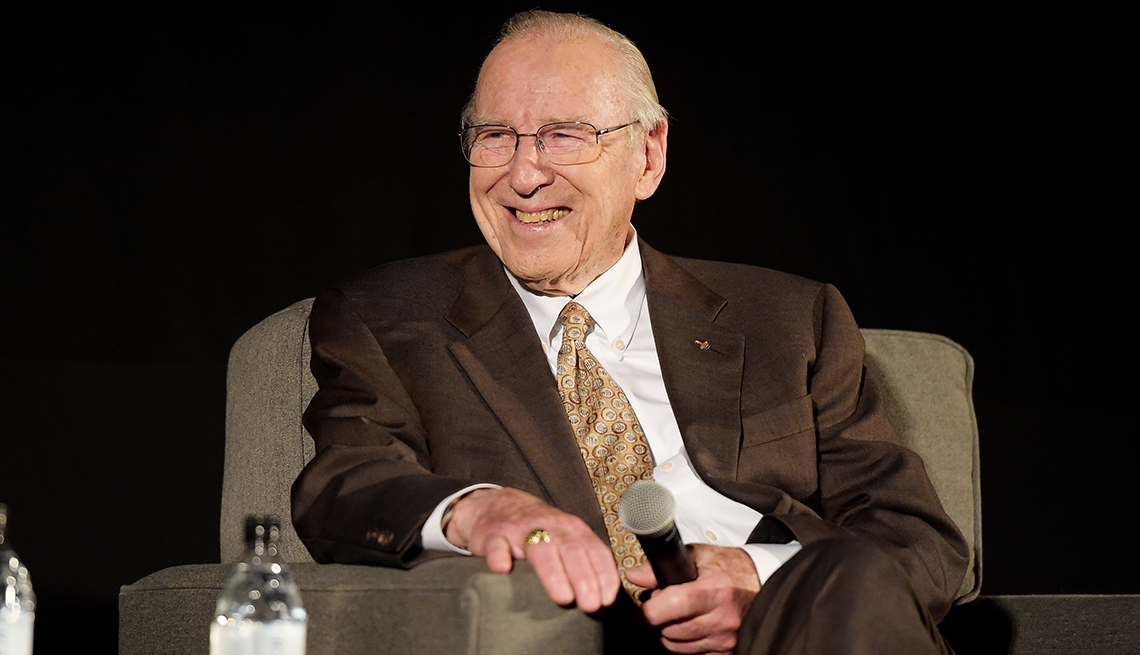 Christmas Eve will be the 50th anniversary of Apollo 8, your first Apollo mission and the first to orbit the moon. What’s your memory?

We had pictures before of the far side of the moon, so we knew what to expect. What we didn’t expect was to see the Earth as it really is. I put my thumb up to the window and could hide the Earth. Suddenly, I realized that I am 240,000 miles away, but behind my finger is a planet with about 4 billion people. That told me in a moment just exactly what we are in the universe.

Did your philosophy change?

There’s an old saying, “I hope to go to heaven when I die.” Suddenly, it dawned on me that we went to heaven when we were born! We arrived on a planet that had the right amount of mass to have the gravity to contain water and an atmosphere, just at the proper distance from a star. It appeared to me that God had given mankind sort of a stage to perform on. I guess how that play will turn out is up to us.

You reached the moon on the ill-fated Apollo 13 in 1970 but never touched it. Bittersweet?

Well, yeah. My career goal was to land on the moon. I think I would’ve retired a couple of years after that, but I didn’t. For about five years, I was kind of disappointed.

What was your most anxious moment?

The explosion. We [Lovell and fellow astronauts Jack Swigert and Fred Haise] saw we were losing our oxygen — things were getting desperate. But we didn’t have a solution yet. The only thing we could do was go into the lunar module and see if it was possible to use it as a lifeboat to get home. Of course, it turned out to be possible.

“Houston, we have a problem” became an indelible catchphrase. Your memories?

I was coming into the command module and Jack was talking with mission control. He said, “OK, Houston, we’ve had a problem here.” But mission control did not hear him — “This is Houston. Say again, please.” I spoke for Jack: “Houston, we’ve had a problem.” The problem was that we were losing oxygen. One of the tanks was empty, and the second one was going down. The quote became iconic because it fits into millions of situations people experience every day. Every time you turn around, you seem to hear, “Houston, we have a problem.’’ I wish I had copyrighted it! 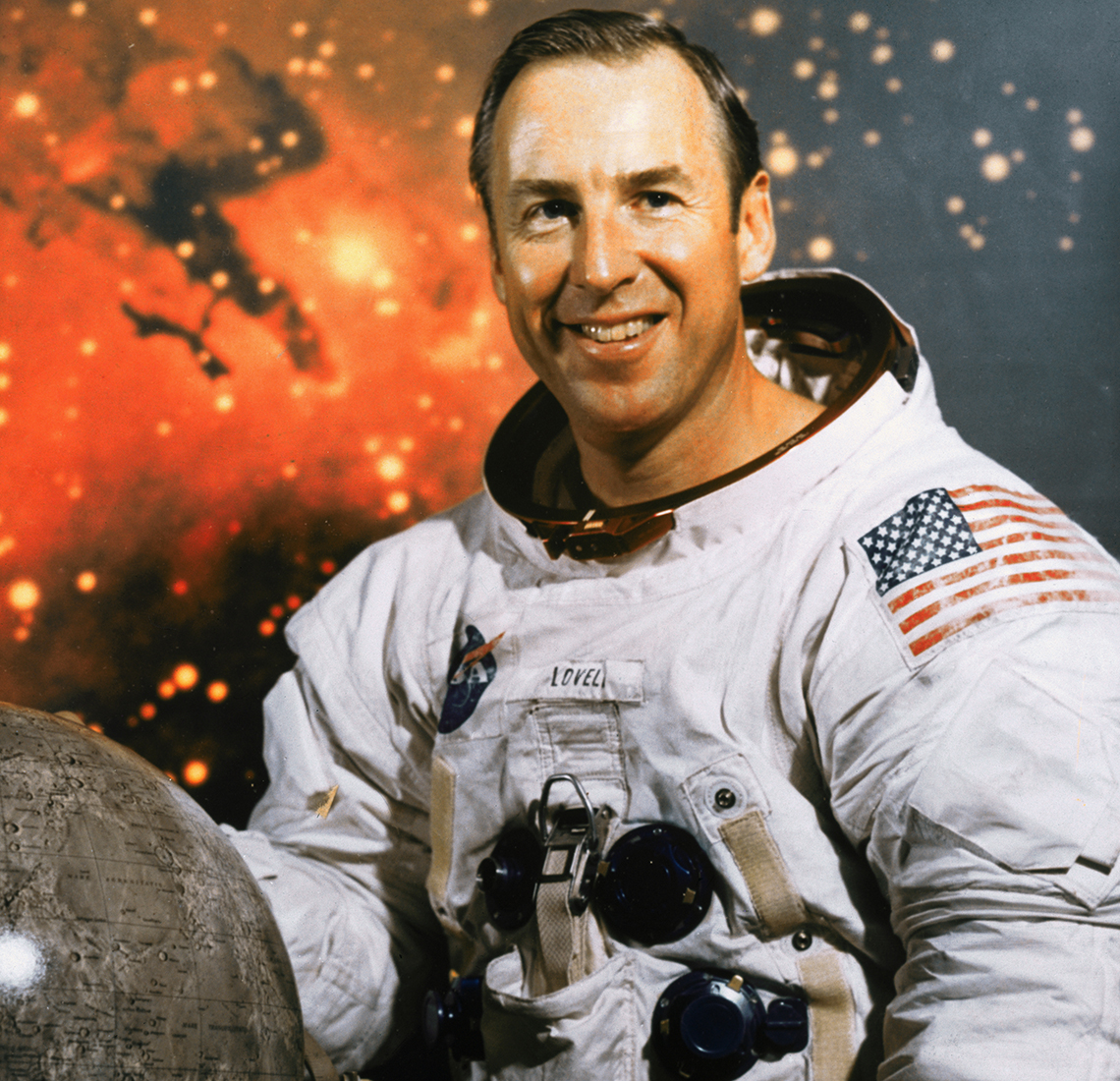 Tell the truth — did anyone on the crew say, “We’ll never survive this”?

Honestly, no, we never had that thought. As long as the situation wasn’t hopeless, we thought positive.

Any positives from that near disaster?

NASA called it a failure at the beginning. It wanted to sort of forget about Apollo 13. Suddenly, it dawned on us that 13 was the best thing that could have happened to NASA at the time. People were tired of hearing about NASA. Then the world realized — the U.S. in particular — what we could do if people put their minds to it. And how good leadership, the mission and teamwork can overcome adversity. That is the story of Apollo 13.

Do you believe that the attitude “Failure is not an option” still exists in our nation?

The notion is that we don’t give up. You can have that feeling, but sometimes you won’t be successful. In the case of [Apollo 13], it worked out. I modified that phrase in my speeches: “Success is the only option.”

What defined the early astronauts?

Originally, we were all test pilots. We sort of lived on the edge. We tested unproven airplanes for the military; we always expected something to go wrong. If you analyze the people that went into space, they are people who live with risk. I think you are born with this sort of impulse. It satisfies egos, gives a sense of accomplishment. We were the Lewises and Clarks of space exploration.

Where should NASA voyage next?

NASA should really concentrate on revisiting the moon. There’s a lot of talk about going to Mars, but people don’t really understand how far away that planet is and the problems to overcome sending a live crew. We’ve sent sophisticated robots there that have roamed the surface. We know more about Mars than Neil Armstrong knew about the surface of the moon when he walked on it. We should go back to the moon, examine it thoroughly, make flights routine and reliable, and then make a successful martian trip.

What do you think of privatized space travel?

I have doubts and questions about the commercialization of space. The definition of commercialism is that you have to make a profit. This is entertainment. I met Jeff Bezos last year — a really nice guy. He wants to put people in suborbital flights at zero gravity for two to three minutes. It has been done before. You pay a lot of money, then you come back to Earth. 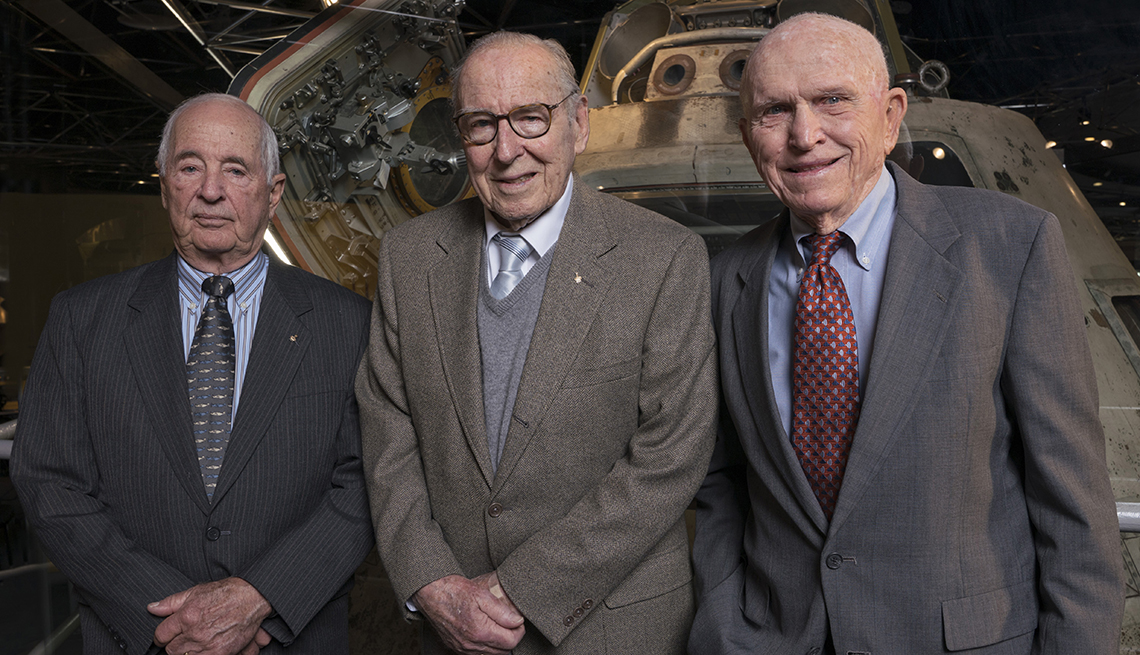 'Apollo 8' astronauts, from left, William Anders, Jim Lovell and Frank Borman pose together at the Museum of Science and Industry in Chicago on April 5, 2018.