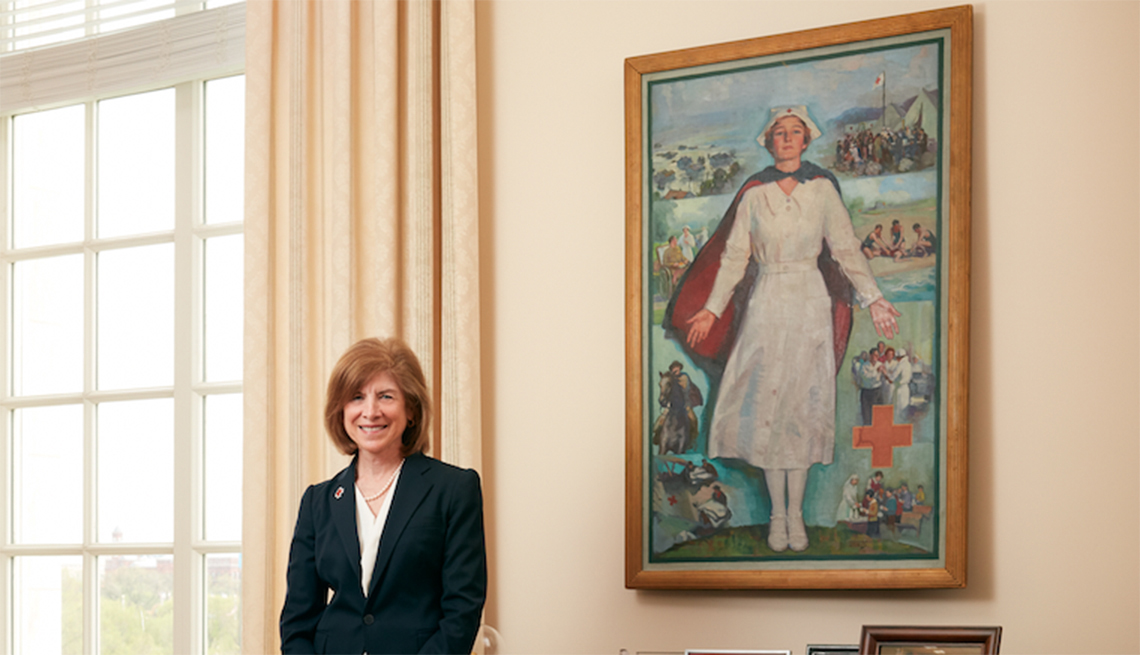 You’ve been a successful executive and a professor at Harvard. The Red Cross is your third career. What do you tell others seeking to reinvent themselves?

People call me for career advice, and they’re talking with their head. The advice I would give is, also decide with your heart. If your heart doesn’t soar at the notion of doing that, you probably want to keep looking.

What would surprise most people about the Red Cross?

They say 1 in 5 people have been touched by the Red Cross in some way. Lots of people come up to me and say, “You guys taught me how to swim,” or, “You taught me first aid and I saved someone’s life.” When they announced I was coming, one of the professors at Harvard said, “Do you know that I had a heart attack? Somebody who had Red Cross training saved my life in the stairwell.”

After the earthquake I went to the Sichuan Valley of China in 2009. It’s so pristine and beautiful. Then we came around a corner, and half of this mountain is gone! I heard from a 7-year-old child, through an interpreter, what it was like. She was on the lawn in front of her school with 14 of her classmates painting watercolors when the entire school collapsed. There were 200 kids buried alive in the rubble behind her. We help people in their darkest hours. This is not about material logistics, it’s about hope and comfort.

When did you first love the job?

It was 2008, [hurricanes] Ike and Gustav. I threw on a Red Cross T-shirt and volunteered. I was dishing out chili for two and a half hours. It was in the 90s, and in the truck it must have been over 100 degrees. People hadn’t had a hot meal in so long. Everyone was saying, “Thank you, Red Cross.” I had to go straight onto an airplane, and I smelled like body odor and chili. I still had the T-shirt on and people were saying, “Thank you.” They had no idea who I was but, “Thank you.” It made me fall in love with the mission.

What other experiences have really stuck with you?

It was the floods in Louisiana. This woman named Sandra, she lost everything, including her wheelchair. Her neighbors saved her life by putting her on an air mattress. They floated her to safety and dropped her at our shelter. We got there as Red Cross volunteers were giving her a wheelchair. She burst into tears and said, “I’m the luckiest person in the world.” That’s what you see, this incredible resiliency. You see it again and again.

The Red Cross was in debt and behind technologically when you arrived. How did that change?

Red Crossers are so mission-driven that, when I was able to lay out that we were in trouble, everyone wanted to do their part. We had $209 million of operating deficit when I started. Within two years, we were breaking even again. We’re all over social media. We’ve discovered new channels on how to reach donors and reach people who are in need. Overhauling our technology has really had a big impact as well.

Give us quick disaster advice.

A home fire can strike anybody. There are just two things to do to prepare. You’ve got to have an evacuation plan to get out in two minutes, and you have to have a working smoke alarm. It’s amazing how many people don’t.

What can people do at the Red Cross as a volunteer?

You can be one of our disaster responder volunteers that packs up and goes for three weeks. You’d be amazed how many retired couples do this together. They’ll go on a feeding truck together and deploy together. If you want to donate blood, the need for that is constant. We need 15,000 people a day volunteering to donate blood for us to supply the nation with its blood supply.

Can you be too old to give blood?

No, there are limitations, but no age limit. We have a lot of folks that are in their 60s and 70s that donate blood.

After 10 years, are you planning your retirement yet?

You sound a little bit like my husband. He has come to grips with the fact that I love it here so much that at one point he said, “You’re going to die with your boots on, woman!”