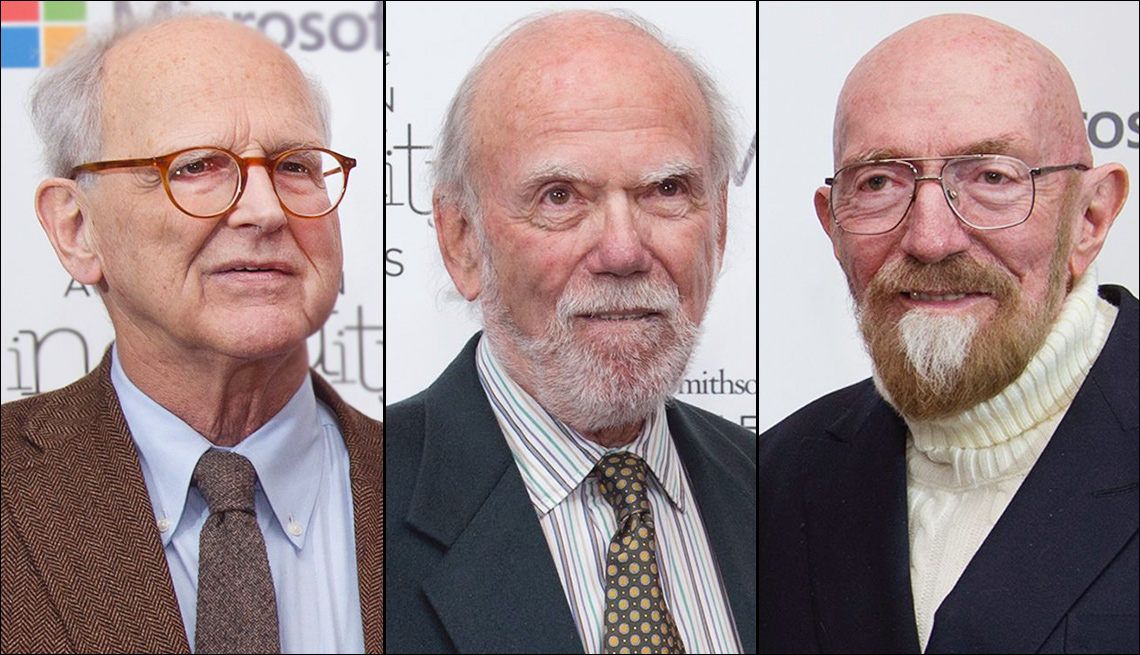 Winners of the 2017 Nobel Prize in Physics are, from left, Rainer Weiss, Barry Barish and Kip Thorne.

While their discoveries span topics as diverse as circadian rhythms and spacetime, the Americans winning Nobel prizes in the sciences this week are unified not only in their brilliance, but also in their ages.

Ranging from 68 to 85 years old, the silver-haired scientists now exchanging their millions in Swedish kronor were not all being celebrated for discoveries made years ago, in their relative youth. In fact, it was just two years ago that the Americans who share the physics prize detected their paradigm-changing gravitational wave, after hearing the faint reverberation of two black holes colliding 1.3 billion years ago. And they did so at the mature ages of 75, 79, and 83. So much for Einstein’s promise that “a person who has not made his great contribution to science before the age of 30 will never do so.” (He also thought no one would ever be able to measure gravitational waves, though his own theory of relativity posited them.)

Einstein nabbed his physics prize at 42; Marie Curie at 36 (she also received another, in chemistry, at 44.) If it seems these days that such geniuses keep getting older and older, well, they do. Bruce Weinberg, an economist at Ohio State, coauthored a study that looked at when Nobel laureates in physics did their prizewinning work. That age was 40 in 1905, 48 by 2008, and today, it’s slightly over 50 — a fact that challenges the conventional wisdom “that scientists become less creative and less innovative as they age,” he notes.

The shift in aging physicists is influenced by many things, one of them the fact that U.S. universities abandoned mandatory retirement ages in 1994, allowing scientific geniuses to work longer. Another factor, Weinberg says, is how physics has changed from a more theoretical field, where younger minds tend to dominate, to a more empirical, or less abstract, one. It’s in this area of science — which typically encompasses medicine — that the older mind can have something of an advantage. “What it takes to do great empirical work is an accumulation of knowledge and fact and an understanding of how to put pieces in the right places,” he says. “And you get better at that as you age."

And that’s potentially good news for science as a whole, given that Weinberg has also found that the average age of scientists, including computer scientists, has been creeping upward, from 45 to 49 between 1993 and 2010. This upward trajectory is greater than in the workforce as a whole and will continue even after the boomers have finally retired.

While the shift is exciting if you’re a genius hoping for a third act, it could tend to make people obsessed with innovation a little nervous, as they may worry that brilliant old people won’t retire and make room for brilliant young people, who they might assume will make them more money. But that concern turns out to be somewhat unfounded, too, especially if you use patent applications as a litmus test. For starters, one of the most important filings of this year went to a 94-year-old, John Goodenough. He and his team at the University of Texas at Austin developed a cheap, lightweight battery that promises to revolutionize electric vehicles.

For bigger proof, John P. Walsh of the School of Public Policy at the Georgia Institute of Technology studied thousands of patent applications in the U.S. and Japan to find that people over 55 have the greatest chance of receiving a “high value” patent, or one that can make someone lots of money. (The finding was stronger in the U.S. than in Japan, where there remains “strong pressure to retire people in their 50s or 60s,” Walsh says.) As he sums it up, “There is a tendency to think of innovation as something you do when you are very young, but that’s not the case. There are lots more senior people who are contributing, and lots of contributions come from more senior people.”