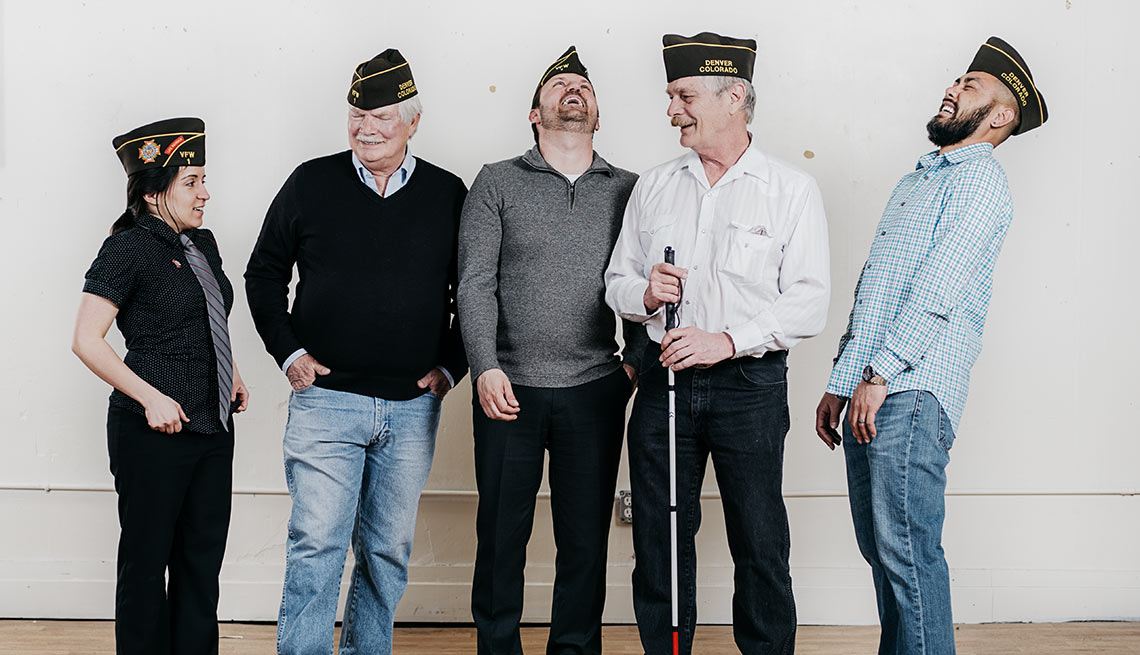 As a combat veteran, Brittany Bartges tried to join a Veterans of Foreign Wars post after returning from Iraq in 2007, but had no luck. She filled out an application and never heard back. She tried another VFW post, and while the members welcomed her, she didn't feel a fit. "Anytime I walked into a VFW, I felt so out of place," says Bartges, 29, a former Army intelligence analyst. "People assume you're there to pick up your dad or something."

It's not just the growing population of female combat veterans who aren't stepping through VFW doors these days. Their male counterparts from the wars in Iraq and Afghanistan aren't joining either, and that's exacerbating a membership crisis for an organization that has fought for veterans benefits since its inception more than a century ago.

Founded by veterans of the Spanish-American War, the VFW was crucial to forming what is now the Department of Veterans Affairs and beloved programs like the GI Bill, which pays for veterans' higher education. The VFW pushed for benefits for Vietnam veterans exposed to Agent Orange, lobbied for reform after the recent scandals at VA hospitals and helps veterans navigate the VA bureaucracy.

Rep. Jeff Miller (R-Fla.), who chairs the House Committee on Veterans' Affairs, lauds the work that is done by veterans groups. "The work of improving the lives of veterans while making the Department of Veterans Affairs more efficient and accountable would not be possible without their support," he says.

But now these groups are fighting to survive. The VFW has lost a third of its members over the past 20 years. A thousand posts have closed in the past decade. Of the organization's 1.3 million members, the average age is 67 — and with more than 400,000 members age 80 and older, numbers will plummet further over the next decade without an influx of new blood. The American Legion, whose members have served in the military in wartime but not necessarily overseas, hasn't fared well either. Founded in 1919, it has lost nearly a million members from the 3.1 million it had in the 1990s.

Many younger veterans don't realize all the VFW has done to benefit them, says Doug Goodman, 72, commander of Post 1771 in Lafayette, Colo. But that clout is in jeopardy. "It's a game of numbers with Congress," he says. "The more you have, the more they listen."

After World War II, VFW membership ballooned from 200,000 to 1.5 million, and the American Legion swelled from 1 million to 3.3 million. Participation rates are similar today — 15 percent of Iraq and Afghanistan veterans have joined traditional groups like the VFW and the American Legion — but the number of people fighting today's wars is far smaller. "We are losing the World War II veterans at a faster rate than we're creating new veterans," says Randi Law of the VFW's national office in Kansas City, Mo.

To stay relevant, the VFW needs a larger percentage of veterans like Bartges to join. She gave the organization another chance in 2012 when she tried out Post 1 in Denver, the nation's oldest VFW chapter, formed in 1899 as the National Society of the Army of the Philippines. Immediately, she saw a difference, with several women and younger veterans active in the post's service programs.

Like most chapters, Post 1 had thrived for years, but by the early 2000s, membership had dwindled. "We weren't getting enough people at the meetings for a quorum, which is five people," says Michael Mitchel, 48, the post commander. Mired in debt, the chapter began recruiting younger members. 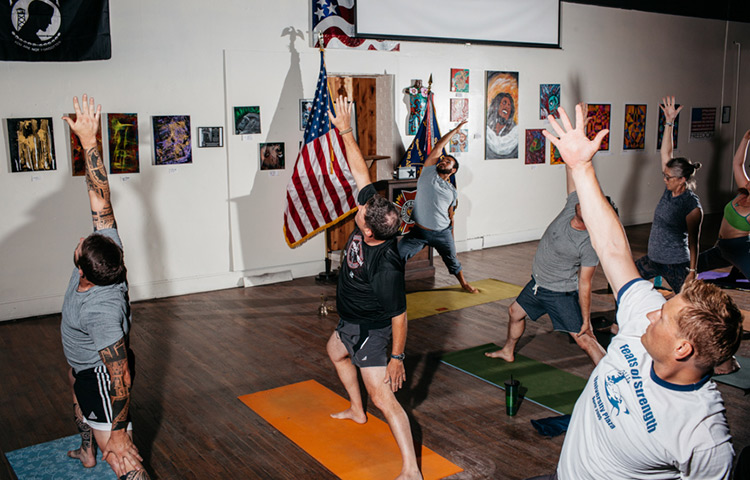 VFW posts are trying new things to attract younger members. Vets can bond at a weekly yoga class at Post 1 in Denver.

That reflected a national trend in which veterans groups have sought to arrest decline by reaching out to a new generation — with promising, but not yet conclusive, results.

Some VFW chapters, like Post 4534 in Rockledge, Fla., have gone smoke free, and some have gotten rid of their bars altogether, to focus more on family-friendly activities. Post 3199, in Modesto, Calif., is building a playground, and Post 12153 in Greenwood, Ind., has an exercise room. To promote activities and appeal to younger veterans, many posts have embraced social media.

Denver's Post 1 has been among the most aggressive in changing to survive. In 2014, Post 1 moved into a former gallery in Denver's hip arts district. There are photography and acting classes, yoga and tai chi. "We're the hub of the veteran community in Denver," Mitchel says. "If we can't help you, we'll put you on the right spoke." Membership, which had dropped to 800, has climbed to 1,100. And it's not just younger veterans; many new members served in Vietnam, and are giving the VFW a chance for the first time.

But reinvention isn't easy, as Dan Shoemaker learned when he took over Post 4267 in Gunnison, Colo. After being medically retired from the Army due to injuries sustained in Iraq, he joined the VFW and found quick camaraderie. Within months, a World War II veteran nominated Shoemaker, 36, to lead the post. "We need guys your age to start moving up the ranks," Shoemaker was told.

"I did spaghetti dinners, fish fries, family nights," Shoemaker says. To Iraq and Afghanistan veterans in the area, he pitched the VFW as a relaxed environment where they could have conversations with their brothers and sisters in arms. But just two of 20 young veterans he spoke with joined. The post kept losing money, and closed in 2014.

As VFW posts die off, newer veterans are worse off for it, losing the chance to draw on older veterans' experiences.

Russell Attema served two tours in Vietnam with the Army Rangers. Afterward, he told few people that he had been to war. Only later, when he joined the American Legion in the 1990s, did he realize the benefit of shared experience among veterans. "Same mud, same blood," he says. "There's no way to explain what you're dealing with to someone who hasn't worn the uniform."

Since joining Post 1 six years ago, he's tried to help younger veterans learn from his experiences. "They need to know that things are going to be OK," says Attema, who is 65. "I've had a number of conversations with guys from Iraq and Afghanistan, and I'll be bawling in the corner with them."

The post's Vietnam veterans are among the most welcoming to younger members. "We didn't get any parades when we came home," says John Holland, 68, a Marine Corps veteran of Vietnam. When he joined the VFW in 1984, he wasn't welcomed by the World War II and Korea vets. "We're not going to see it happen again," Holland says. He takes pride in the post's embrace of female and gay veterans. "If you're eligible to be a member, you're welcome here."

Bartges, who now serves as the post's senior vice commander, found camaraderie with older members: "It gives you a sense of where you've been and where you come from."

Ray Starkey, one of Bartges' friends, is Post 1's oldest member at 94. He joined in 1951. Back then, membership topped 2,000. More recently, he worried that the post would just fade away. But now, as he sits in a chair on a recent evening watching younger members in animated conversations, he smiles and says, "It's getting stronger. We need them."

Brian Mockenhaupt is a former Army infantryman who served two tours in Iraq.

Video: Career of Courage - Col. Frederick Lough joined the US Army Medical Corps Reserves at 58 and was deployed twice to Afghanistan where he performed hundreds of surgeries in tents.