With fewer options for getting meals, older adults relied on expanded aid to maintain healthy diets 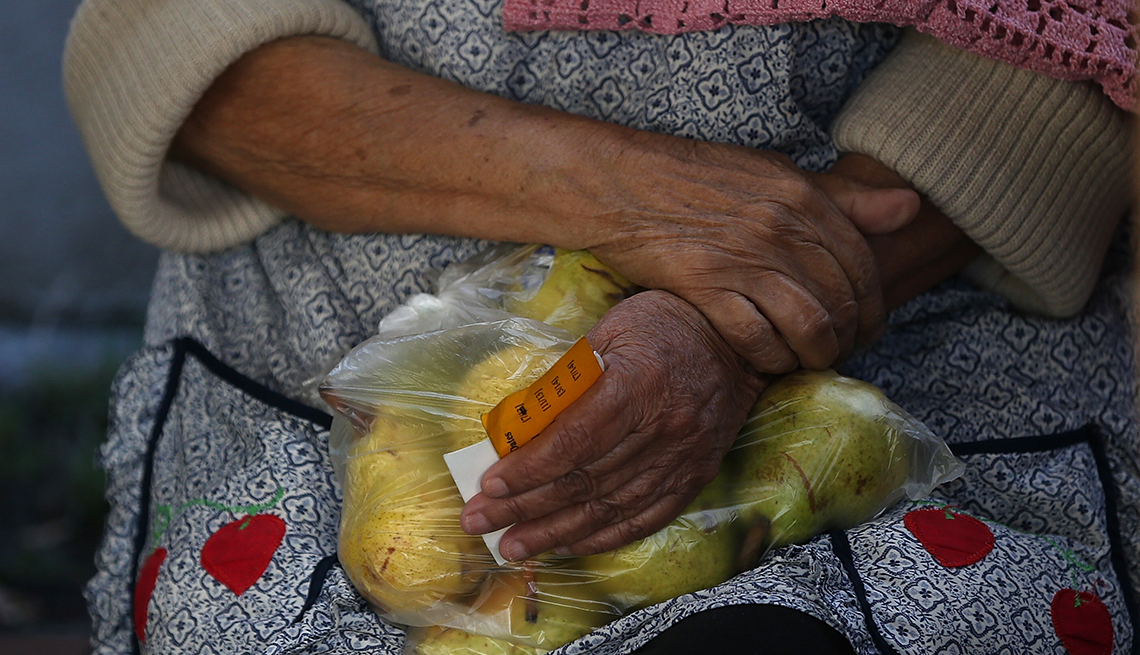 Sometimes during the pandemic, Y-Antoinette Echols ate less so that her great-nephew could eat more.

She helped care for the boy and made sure to put him first when, for example, she started to run out of his favorite fruit.

“I might get four blueberries out of a pack,” said Echols, 63, of Englewood, New Jersey. “But that’s OK.”

For Echols and millions of lower-income older adults across the nation, the COVID-19 pandemic made it tougher to get all the food they needed to stay healthy.

The threat of the coronavirus caused senior centers to pause congregate meals, and some food pantries reduced hours or even closed when volunteers stayed home. Many older Americans feared making frequent trips to the grocery store. Some lost jobs. Imposed isolation only made things worse, separating seniors from family members who might be able to help cook or share meals.

“Seniors were forced to make choices and cut corners,” said Jean Toth, executive director of the Food Bank of Northeast Louisiana. “And asking for help is always difficult, so hunger can sometimes be a very silent pain.”

That pain afflicts millions. In 2020, 3.3 million adults age 65 and older were food insecure, according to AARP Public Policy Institute analysis. That’s 6 percent of the senior population.

For many lower-income older adults, the expanded food stamp benefits created by pandemic relief laws made a big difference in their ability to maintain healthier diets. Here are two examples.

Hunger can be especially deadly for older Americans. David Carr, a geriatrician at Washington University in St. Louis, said failing to get proper nutrition can reduce strength and muscle mass and impair gait, balance and even cognitive abilities. It can also lower immunity, making people more vulnerable to contracting and dying from COVID-19 at a time when the contagious delta variant is surging.

“It’s a vicious cycle,” Carr said. “The more weak you get, the frailer you are.”

During the COVID pandemic, many seniors received boosts in federal government aid that promised to help break that cycle. Emergency allotments were made available to households eligible for the Supplemental Nutrition Assistance Program, commonly known as food stamps, and SNAP’s maximum benefit increased by 15 percent, roughly an additional $27 per person per month for those receiving the maximum benefits.

That 15 percent increase expires at the end of September, after some states already ended emergency allotments. For many people who receive SNAP benefits, the loss in increased pandemic aid could be offset by the recently approved change to the federal Thrifty Foods Plan formula, which determines how much money a household may receive in SNAP assistance. The largest benefit a one-person household could receive under the new plan will be $250 per month (or $2.74 per meal), up from a maximum of $234 a month (or $2.56 per meal), excluding all the pandemic economic relief benefits that are ending.

The boost in SNAP food aid during the pandemic was a rare bright spot in a year and a half of struggle.

When the pandemic hit, Carr said older adults who relied on congregate dining programs at senior centers and elsewhere saw those options largely disappear. Not only did those programs provide reliable low-cost or even free meals, “when you’re around people and there’s that excitement,” Carr said, “you’re more inclined to eat and consume and do much better, nutrition-wise.”

The isolation of the pandemic had the opposite effect. Carr recalled patients confined to homes and rooms who sank into depression and took to bed for weeks. “For a lot of people, they just shut down, and they lose a lot of weight,” which makes them even more vulnerable to COVID, he said.

At the same time, the pandemic strained the nation’s food safety net. Meals on Wheels programs lost volunteers — who worried for their own safety — and had to recruit new ones, shift delivery routes and find new sources of food. Many small food pantries reduced hours, and large and small pantries alike shifted to drive-through food distribution.

Echols, who gets by on Social Security disability benefits, said some of the places where she had sought food before the pandemic, including a church, shut down completely for a while, then opened for very limited hours. “There was nowhere to go initially,” she said.

Echols was extremely grateful for help she got from the Center for Food Action, a large nonprofit serving northern New Jersey’s poorest and most vulnerable residents, which distributed food via a drive-through. But she temporarily lost access to that help, too, when her car broke down and she had to replace it.

Getting to grocery stores ― and ordering food online ― also proved challenging for millions of older adults. Toth said many rural areas in Louisiana, for example, have no internet access and no big grocery stores.

Even before the pandemic, Louisiana tied with West Virginia for the fifth-highest rate of senior food insecurity in the nation among states, according to "The State of Senior Hunger in America 2019." That study, by Feeding America and partners Craig Gunderson of Baylor University and James Ziliak of the University of Kentucky, found nearly 1 in 10 seniors in that state were food insecure, meaning they weren’t sure where their next meal was coming from.

The financial devastation of COVID just made things worse, and people turned to food banks and pantries to meet their needs.

Mary Andrews of Monroe, Louisiana, said she has been picking up a box of food every month from the Northeast Louisiana bank during the pandemic, getting canned goods, milk, butter, juice, chicken and more.

“When you get that box, you are really surprised and happy,” said Marles, 66, who has diabetes, high blood pressure and high cholesterol. “They give you everything you can use in the kitchen.”

Marles said she used to go to senior centers for group meals before the pandemic, “but the senior place is closed, so I go to the food bank.”

Lisa Smith, director of client services at ElderServe in Louisville, Kentucky, said many older adults found ways to get what they needed, even if it meant trying several different avenues or seeking help for the first time.

“It’s definitely been hard for seniors,” she said. “But they’ve been very resilient.”

So have those trying to help them. In recent months, widespread COVID vaccination has enabled many volunteers to get back to work in food pantries and meal programs and also has helped relatives feel safer visiting senior family members.

During the early days of the pandemic, there was not much aid for seniors, Carr said. “But eventually, people found a way.”

For many seniors, increases in SNAP benefits have been another crucial lifeline. Carr considers them “a godsend.”

The Center on Budget and Policy Priorities pointed to a cascade of changes to the program during the pandemic, beginning when the Families First Coronavirus Response Act of March 2020 gave the U.S. Department of Agriculture (USDA) the authority to let states temporarily modify procedures to make it easier for people to apply for or continue getting SNAP benefits.

The act also allowed states to give SNAP households emergency allotments, which all states did. At first, some of the lowest-income households were left out, according to the Center on Budget and Policy Priorities. But the Biden administration reversed this policy, and starting in April, all households in states with those benefits received emergency allotments of at least $95.

For many seniors, this meant a big boost. Nicole Burda, senior legislative representative for AARP, said a single senior receiving $16 before the pandemic saw benefits rise to $204 a month with pandemic emergency allotments, which then increased to $234 in January due to the temporary 15 percent boost. Someone already at the maximum eventually saw benefits rise to $329 a month.

But those allotments hinged on the federal government declaring a public health emergency and states issuing an emergency or disaster declaration. The temporary federal 15 percent pandemic boost to SNAP benefits is ending this month, and some states already have stopped providing their emergency allotments.

Once the emergency benefits expire, however, SNAP recipients will continue to receive a level of increased aid, due to the change in the benefits formula USDA recently enacted. Burda said seniors will generally see an increase to their benefits compared to pre-pandemic benefit levels as the federal government adjusts its Thrifty Food Plan, the basis for calculating SNAP benefits. Under those changes, the maximum benefit for a one-person household will be $250 in the fiscal year beginning Oct. 1.

But the minimum will be only $20 a month, meaning those who would have previously gotten $16 a month will see just a $4 increase from pre-pandemic benefits when emergency allotments end.

Andrews said pandemic-related increases have allowed her to buy more groceries than usual. The continuation of higher benefits “would be a blessing,” she said.

Echols said the benefits she used to get before the pandemic, which amounted to about 50 cents a day, were not enough.

“Thank God for the increase. I can really have a healthier diet,” she said. “I can buy all the water I want. And the fresh fruits and vegetables, and the better cuts of meat. And I can make it stretch.”

Burda said research commissioned by AARP Foundation shows pandemic-related SNAP benefits “have helped make sure older adults don’t go hungry during these incredibly challenging times.” She said AARP state offices have been monitoring state-by-state decisions on emergency allotments and taking action. For example, AARP Idaho joined anti-hunger groups in a letter calling on the governor to reinstate allotments, and AARP South Carolina released a statement asking the governor to reconsider lifting a state of emergency declaration because of its implications for SNAP benefits.

“We are very concerned that food aid is expiring before the financial crisis is over for many older adults,” Burda said. “As the nation recovers from the pandemic, needs will differ from community to community and person to person. AARP is committed to making sure older adults can continue to put food on their table in their time of need.”

Marles said she hopes the SNAP increases stay in place as long as possible. She said she tends toward anemia but has been able to eat better and avoid iron deficiency because she has extra money to buy more groceries to supplement what she gets from the food bank.

“If that amount goes down, it would be kind of rough,” she said. “It really would.”

Laura Ungar is a contributing writer for AARP. She previously has written about food insecurity among older adults for Kaiser Health News and also has worked for USA Today, the Hartford Courant in Connecticut and The News Journal in Delaware. She is investigative and enterprise news editor at The (Louisville) Courier-Journal.​

Agencies have been slow to distribute billions in rental assistance