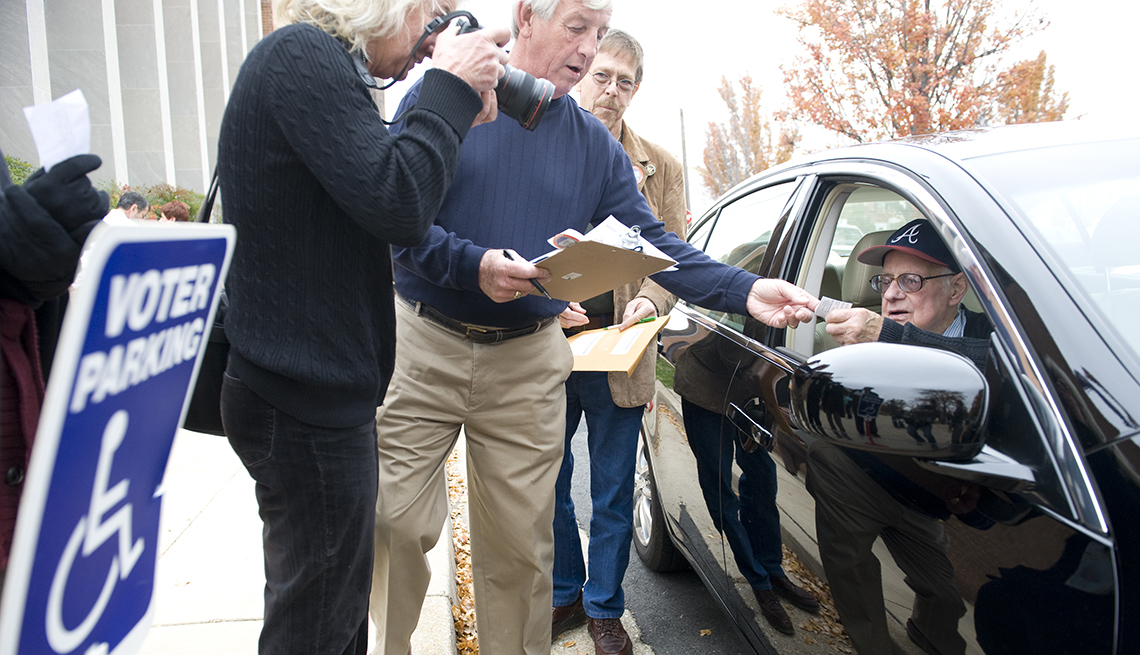 Some states offer curbside voting, where poll workers bring a paper ballot or a voting machine outside to allow someone with a disability to vote from a car.

En español | If a voter needs to maneuver a wheelchair into a polling place or has trouble reading the ballot, federal law is very clear: Elections officials must provide a safe, private and independent way for them to vote.

However, the accessibility of polling places varies widely across America. According to the General Accountability Office (GAO), in the 2016 election only 40 percent of polling places surveyed fully accommodated people with disabilities. Yet that is a big improvement from 2000, when only 16 percent were fully accessible according to a similar study.

GAO investigators have consistently found many polling places with steep wheelchair ramps, no ramps at all, difficult paths from parking lots to polling places and lack of signs pointing to accessible entrances.

The Americans With Disabilities Act requires that public services, including voting, be accessible to people with disabilities. And the Help America Vote Act (HAVA), enacted in the aftermath of the 2000 “hanging chads” presidential election, requires every polling place have at least one accessible voting station. That machine must, for example, be able to mark the ballot for someone who cannot do so and feature large type for people with visual problems.

Before these requirements, if someone who was blind wanted to vote in person, he or she would have to bring a sighted person into the polling place and ask them to mark the ballot for them. “They would have to tell them how they were voting and rely on them to fulfill their wishes,” says Lawrence Norden, deputy director of the democracy program at New York University School of Law’s Brennan Center for Justice. That took away that voter’s right to a secret ballot.

Norden adds that people who may not consider themselves disabled can benefit greatly from the accommodations that have been made. That includes the voter who forgot reading glasses but can use the machine with big type, or an older adult who cannot stand in line for long periods and can benefit from a chair being nearby.

"I think we've come a long way in terms of making the electoral process accessible to people with disabilities. But we're not all the way there."

In recent years, an increasing number of states have adopted alternatives to going to a polling place on Election Day. It’s now easier to vote absentee and more states allow voting by mail. Online voter registration also has made it easier for people with physical disabilities to register.

Also, some states offer curbside voting, where poll workers bring a paper ballot or a voting machine outside and voters can cast ballots from their vehicle or on the street. Advocates suggest people check beforehand with local election officials to see if curbside voting is available in their area.

Michelle Bishop, voting rights specialist at the National Disability Rights Network, says that those alternatives are positive, but they don’t replace the right of someone with disabilities to vote inside the polling place.

“Voters really love going to polling places on election days,” she says. “It’s part of being an American citizen. We can’t say there is this one group of Americans who have to just stay home.”

The Election Assistance Commission (EAC), created by HAVA, has been spreading the word about the options for voters with disabilities. It has reached out to advocacy groups and circulated a wallet-sized card that lists their rights, including to expect poll workers to offer assistance. EAC Chairman Thomas Hicks urges voters to check with their elections officials about the accessibility of their polling place and ask if they can test out the equipment before Election Day. Advocates say voters with disabilities should urge their local elections officials to make the kind of accommodations federal laws require.

“I think we’ve come a long way in terms of making the electoral process accessible to people with disabilities,” says Bishop. “But we’re not all the way there.”