"It has been a long road for me," Rear Adm. Alan M. Steinman says. — Jose Mandojana 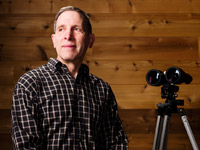 Listen as Rear Adm. Alan M. Steinman describes his experiences with DADT in the military.

En español | Through tear-filled eyes I watched President Barack Obama as I and several hundred other invited military veterans listened to the commander in chief talk about the end of "Don't Ask, Don't Tell."

We were witnessing history in the making — "a moment more than two centuries in the making," he called it — the end of discrimination against gay, lesbian and bisexual American citizens in our armed forces.

I was overwhelmed with emotion. And when the president put the final stroke of his signature on the bill to repeal DADT, pounded the table and said, "This is done!" we jumped to our feet and filled the auditorium with joyous cheers. We were now, as the president had said, truly and as equals "welcomed into the ranks of the finest military the world has ever known."

It has been a long road for me to arrive at this point in the battle for equality in military service. I served our nation proudly for more than 25 years — from 1972 to 1997 — as a physician in the U.S. Public Health Service and U.S. Coast Guard. I ultimately achieved the rank of rear admiral and became the Coast Guard's director of health and safety (equivalent to the surgeon general in the other branches of the armed forces).

During that entire period, I remained "in the closet": I did not reveal my sexual orientation to anyone in the Coast Guard, nor even to my relatives. In order to serve my country, I had to sacrifice my personal life.

I could not have a family; I could not share my life with a loved one; I was denied the opportunity to enjoy all the rights and privileges taken for granted by my heterosexual counterparts.

I was not alone in enduring those constraints. The tens of thousands of gay, lesbian and bisexual service members who served with me and who are serving now, in Iraq, Afghanistan and elsewhere, were officially required to suffer the same indignities. They put their lives on the line just as did their heterosexual peers, but the DADT law had required them to be silent, celibate and invisible.

Although they performed the same duties and shared the same risks as their straight counterparts, they could not be honest with their peers or their commands about who they really were, they could not honestly seek medical or spiritual counseling for their emotional problems, and they had to live in fear that at any time, someone might find out about them and cause their discharge from the military, terminating their career.

Since I came out publicly in 2003 on the 10th anniversary of DADT, I have had the privilege of meeting hundreds of gay, lesbian, bisexual and transgendered veterans and service members.

In fact, in the recent Pentagon study on DADT, 69 percent of active duty troops said they knew they were working with gays in their own unit, and of those, 92 percent said it wasn't a problem.

And even among combat troops, 85 percent to 90 percent of those who knew gay peers said there were no problems. To me, these facts completely refute the assumption underlying the DADT law, that any known gay in a unit would degrade unit morale, unit cohesion and combat readiness.

As I reflect on the years of my retirement I have spent fighting this law, I am gratified that the end of DADT will now allow gay and lesbian Americans to serve their country with the same dignity and honor as their straight colleagues.

And along with my fellow veterans who worked so tirelessly for this goal, I am proud to have contributed to this milestone in American military history.