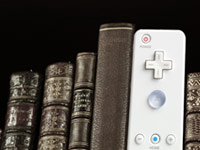 Come in for Wii, too, at several libraries throughout the nation.

Rather, Kleiman, 59, sees Wii gaming machines with active older Americans virtually bowling, shooting arrows and playing table tennis. He sees grandparents learning Skype and Facebook so they can chat online with their distant families. He sees instructors teaching retirees how to use digital cameras and giving word processing lessons. The retirees, in turn, are teaching younger people how to play chess, crochet and knit.

Kleiman is one of the nation's leading consultants on retrofitting the nation's 16,671 public libraries as beacons for older adults — and he is on a mission.

The over-65 population "will double in size by 2025, and libraries are realizing that this is a potentially new and exciting market," says Kleiman, who has consulted with libraries across America on how to attract older people to the stacks. Kleiman sees designated adult spaces as places for assembling an active, more inquiring generation that wants books, but also much more information and connectivity. He believes the proven success of interactive sections for teens and children will translate to the same for older adults.

And Kleiman's vision is catching.

It all began in 2007, when Kleiman, then chair of the American Library Association's Library Service to an Aging Population Committee, took on a challenge from another committee member. His challenge was to incorporate gaming with seniors into the programming activities of the Old Bridge Public Library in Old Bridge, N.J., where he served as assistant director.

"Seniors are not going to drop everything and come to the library and go Wii bowling. It needs to be a bigger part of what you're doing with seniors," says Kleiman, who tapped the library's teen advisory board at Old Bridge for ideas. The young folk brought parents and grandparents for gaming events in the lobby and offered to teach technology and navigation skills.

So with the help of a grant from the Eastern New Jersey Regional Library Cooperative, Kleiman began fashioning the first designated senior space on the East Coast. The library continues to trumpet its designated Senior Spaces on its website, inviting people to attend bridge, Scrabble and craft clubs and watch new and vintage movies together on Friday afternoons.

Kleiman continued his work by helping guide 10 adult-designed spaces in Pennsylvania and New Jersey libraries, and has made plans for retrofitting six more. He also took the Old Bridge prototype and demonstrated its potential at a series of regional and national library conferences and encouraged librarians to apply for grants. The seeds he's sown over the past several years are taking root.

Next: Young and old help each other. >>

Young and old help each other

In Pennsylvania and New Jersey, state library boards channeled funds from the Federal Library Services and Technology Act to help bolster adult-themed projects, according to Kleiman.

The Osterhout Library in Wilkes-Barre, Pa., benefited from such a grant. Elaine Stefanko, coordinator of information services, established the Classic Corner at her facility with a $4,000 grant from the state's library office, and the effort to draw older adults is ongoing. The Wii machine comes out occasionally, says Stefanko, but the biggest draw is board games, especially chess; often the older patrons teach the young children. Older adults also teach whole families scrapbooking and knitting. The library also encourages patrons to write in the crossword puzzle books because it builds traffic and keeps people there.

Young patrons teach, too. "We invite our teen technology club to teach older people how to set up Twitter and Facebook accounts and upload pictures," Stefanko says.

Business is also steady at the Clymer Library in Pocono Pines, Pa., according to Laura Laspee, Clymer's assistant director of adult programming. Laspee received a $4,000 grant from the Office of Commonwealth Libraries. She had heard about such grants at a talk Kleiman gave at a library conference in 2009. With the money, she created the library's Savvy Senior Space, which opened in June 2010.

"The library is like the old-fashioned general store. Everyone comes in and catches up with everybody else," says Nancy Power, 63. "You hear computers clicking away, people talking, people gaming."

She also has a weekly craft club meeting at the library. "One of my friends is 94 and she drives herself in to chat with us and show her progress on her needlework," Power says.

"These areas are destination points, activity points to encourage people to stay and use the library as 'place,' " Kleiman says. He encourages librarians, who frequently have small budgets for new programs, to seek out community volunteers to run events and teach classes.

Royal Oak Library, in a suburb of Detroit, has been holding a weekly Tech Nite. According to library director Mary Karshner, the Monday night event attracts a multigenerational crowd, ages 35 to 80-plus, who come to learn how to use their latest technical gadgets, e-readers, iPods and tablets. The library also holds Saturday meetings on downloading available material to e-readers. Other programs put local history in the spotlight, and the staff serves favorites from the area — Vernors ginger ale and bumpy cakes from Sander's, the area's popular candymaker.

Next: The library of the future. >>

Just west of Royal Oak, the public library in Southfield, Mich., began offering monthly classes on how to start a business, including marketing and financial record keeping. Librarian Tara Moon got the program rolling, and the library now follows up with business-related research assistance.

In the Osterhout Library, Stefanko suggests hands-on presentations to encourage intergenerational participation. Among other events, she hosted a Beatles memorabilia night with music to accompany a tie dye demonstration. With some leftover grant money she bought a variety of large-print books to satisfy the growing audience of older readers in its Classic Corner.

"Libraries anchor the community, if they are doing their job correctly," says Kleiman. "And so many of them are."

The library of the future

With steady outreach, able volunteers and increased grants, Kleiman believes, libraries could outpace senior centers as the place people gather. It could be a throwback to the "People's University," which sprang up on and off college campuses in the 1960s and 1970s.

"Libraries have stayed in there," Kleiman says. "They survived the competition from Barnes & Noble and other booksellers. A decade ago senior centers were the place to go. The library has revived — it is the biggest bargain in town."