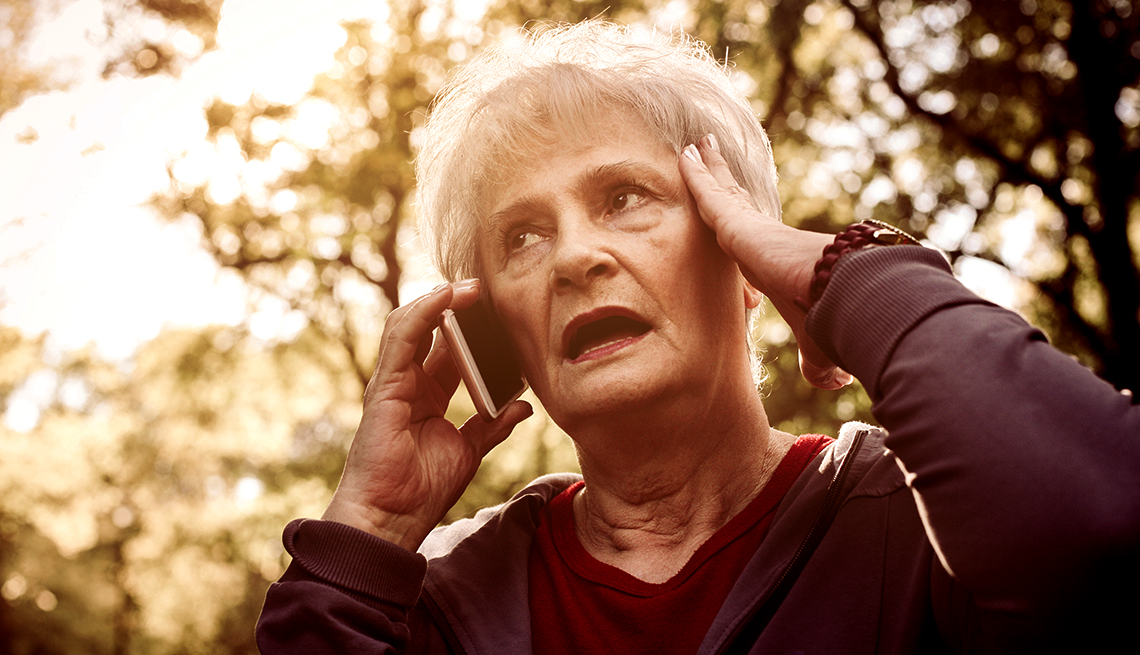 Beware of fraudulent phone calls claiming to be family members.

En español |  Jamie Langlie was frantically packing for an overseas trip with her husband late last year when her home phone rang. When she answered, the man on the line introduced himself and said he was a lawyer calling on behalf of her grandson, who was now sitting in a Florida jail. He told her that her grandson, an 18-year-old high school student in Maryland, was in the Sunshine State to attend the funeral of a friend who was killed in a car accident.

The caller explained that the friend’s parents had flown her grandson down for the funeral and that while he was taking an Uber from the wake to the hotel, police stopped the car because it had a bad taillight. When the police officer had the driver open the trunk, the grandson’s luggage was sitting next to a brick of marijuana. Both the driver and her grandson were arrested on the spot, the caller said, and her grandson needed money for bail.

Then the "lawyer" put the grandson on the phone, and “the voice was similar enough that I didn’t question it,” says Langlie, 68, a retired civil servant who lives in Kensington, Md., and has three grown children and three grandchildren. “He said his folks couldn’t come up with that amount of cash that quickly. My grandson and I are close and I wanted to help him.” The "attorney" told her she could post his bail with a credit card but she said she didn’t have one handy. So he said that Home Depot gift cards would be accepted.

Since she couldn’t consult her husband — he was busy trying to finish up work before their trip — Langlie drove to a nearby Home Depot and charged several thousand dollars’ worth of gift cards to her Home Depot credit card. “I told the clerk I was getting early Christmas presents for my adult children,” she says. Even so, the clerk called over two managers who needed to approve such a big purchase. They signed off on it and Langlie went home, called the "attorney," and read him the codes on the backs of the gift cards. “He called back a little while later and said that everything had been taken care of,” she recalls.

When Langlie and her husband got to the airport, she called her son to ask how her grandson was. It turned out the grandson was with her son. That’s when Langlie realized she’d been scammed. “This is deeply embarrassing because I’m well educated and well traveled and skeptical by nature; I [normally] never do anything over the phone or online,” she says. “It was just a coincidence that I was rushing around and packing, which was why I was frazzled. There’s no way the guy could have known that.”

“Why I didn’t think to call his parents sooner, I don’t know,” she adds. “I should have called and verified with them that it was real. Normally, I fact-check everything. The story was just so plausible.”

After Langlie and her husband returned from their trip, she contacted her local police department and Home Depot. “The police officer who has been working on this said a lot of people are too embarrassed to come forward and report these things — but he said the more people who come forward with these stories, the better they’ll be able to see patterns,” Langlie says. “I decided to speak up because if I can fall victim to this, anybody can.”

The gift cards were likely spent and cannot be recovered. “Gift card fraud, in general, is a problem all retailers are facing,” says Matt Harrigan, a corporate spokesperson for Home Depot. “We do make cashiers aware of gift card scams through training, and we’ve given instructions about what to do if a scam is reported. We plan to continue taking preventive measures in our stores.”