If you get an email or happen across a Web link promising secret photographs or video footage of the shooting of Osama bin Laden, know this: The bull's-eye is on you, courtesy of cyber-criminals. 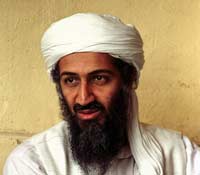 Within hours of news that the mastermind of the 9/11 massacre had been killed by Navy SEALs, scammers launched several covert missions of their own, aiming to trick the curious with false promises of photographic proof of the shooting.

Online security firm F-secure warns of malicious software with a file name "Fotos_Osama_Bin_Laden.zip" making the rounds via email. It includes no actual photos, but if you click on it, it downloads a program to your computer to monitor your online banking activities and redirect your funds into scammer banking accounts.

There's also a link spreading across Facebook and elsewhere that claims to show video of the bin Laden shooting. Claiming SHOCKING NEW video of OSAMA BIN LADENS DEATH! — complete with misspellings and grammatical errors — it instead leads you to take a marketing survey, promising that the footage will follow. Fill it out and the scammers get paid for each completed survey — but you see nothing, says Graham Cluley of Sophos, another online security firm.

If you get any message like these, just hit delete.

Expect more of this kind of thing, because scammers often use what's in the news to get people to fall for their online trickery.

As for the real bin Laden photographs, White House press secretary Jay Carney said Tuesday that officials were considering releasing them to news organizations. "It's fair to say they are gruesome," he told reporters at the White House, adding that there were sensitivities about “the appropriateness of releasing photographs" and that the images could be "inflammatory."

On Wednesday President Obama said the photos would remain secret. “It is important for us to make sure that very graphic photos of somebody who was shot in the head are not floating around as an incitement to additional violence or as a propaganda tool,” he told the CBS News program 60 Minutes. “...We don’t trot out this stuff as trophies.” As for people skeptical that bin Laden was killed, photos were unlikely to change their minds, the President said. But “the fact of the matter is you will not see bin Laden walking on this earth again.”


Sid Kirchheimer is the author of Scam-Proof Your Life, published by AARP Books/Sterling.