En español | Q. I'd like to donate money for the earthquake and tsunami victims in Japan. But I've heard that scammers are setting up scam charities. How can I donate safely?

A. You're right to be concerned. After natural disasters, fraudsters always try to profit from the good intentions of Americans. With heartbreaking images from Japan dominating the news in recent days, U.S. law enforcement officials have been quick to issue warnings about scam charities.

Of course, there are many legitimate organizations that are soliciting donations specifically for victims in Japan. The better-known names include the American Red Cross, World Vision, Save the Children and Mercy Corps. Many others — legitimate and otherwise — are expected to join the effort.

In the most common version of the bad kind, cyber-crooks set up donation websites that appear legitimate. The goal is to collect not only donors' money, but also their credit card information for later use in identity theft. 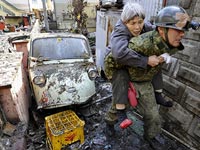 These sites sometimes have Internet addresses that are similar to those of trusted websites. For example, a site might have the address redcross.com instead of the authentic American Red Cross website, redcross.org.

Another common trick is to send e-mails with attachments or links that promise to show photographs or video of the disaster but actually download computer viruses to your machine. You can check the website Spam Mail Spam Blocker, which is tracking such e-mails.

The come-ons can also reach you as links on legitimate websites or search engine result pages — scammers know the techniques of getting search engines to notice and list their sites.

So here's how to ensure your donations are properly used — for Japan or other countries that may be hit by disasters:

Never give personal or financial information, including a credit card number, to someone who calls you unsolicited.

Legitimate charities may solicit by phone but will always send you authenticating paperwork if you ask for it. Hang up on anyone claiming to represent an organization with a name that "sounds like" a well-known charity's name.

News of a catastrophe can soon have waves of crooks ringing doorbells, so if you donate this way, be very careful. Never give cash. Checks should never be written to individuals, but to the organization. Ask for written material about the group. If the person has nothing to offer, consider it a red flag.

With all these forms of donating, you should always check a charity's authenticity and track record before you give a cent. Be wary of claims that 100 percent of donations assist victims. All charities have fundraising and administrative costs. Legitimate organizations typically spend up to 25 percent of donations on such costs.

You can find out about charities by visiting the Wise Giving Alliance run by the Better Business Bureau; Charity Navigator; Charity Watch; or GuideStar.

If you believe you've fallen victim to a disaster relief scam, report it to the National Center for Disaster Fraud, part of the U.S. Department of Justice, or by calling 1-866-720-5721 toll-free. Report disaster-relief spam e-mails and suspicious websites to the FBI's Internet Crime Complaint Center.

Sadly, law enforcement agencies have lots of experience with this crime. After Hurricane Katrina, some 6,000 relief websites quickly popped up, many proving to be scams, according to the FBI. Nearly 1,500 people were later indicted on fraud charges related to those bogus relief efforts, along with donation scams after Hurricanes Rita and Wilma.

"Our thoughts and prayers are with the victims of this tragedy," said Arkansas Attorney General Dustin McDaniel after first news arrived from Japan.

"Unfortunately, if our experience with earlier tragedies is any guide, we suspect that there may be so-called charities that would try to take advantage of generosity by scamming people out of donations intended for disaster victims."