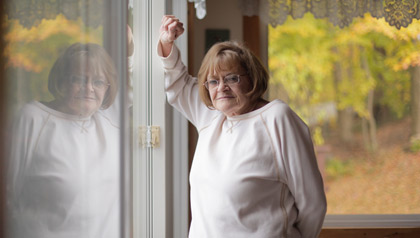 Muriel Kenitz, 72, of Galway, will pay much more for prescriptions in January. That’s when the Elderly Pharmaceutical Insurance Coverage program eliminates copay coverage until she hits the doughnut hole.

En español | For the past several years, Muriel Kenitz, 72, has relied on Medicare Part D and New York's Elderly Pharmaceutical Insurance Coverage (EPIC) program to help her pay for the 13 medications she takes daily.

The combination of Part D and EPIC meant she paid about $150 a month for her prescription drugs. But come January, when changes to EPIC kick in, Kenitz's medications will cost her $591 a month, an amount she says she can't afford.

Gov. Andrew Cuomo, D, and the legislature cut the EPIC budget by about $12 million as part of reductions in state agencies to eliminate a $10 billion deficit. EPIC will no longer contribute toward copayments until a Medicare enrollee and his or her insurer has spent $2,930 on prescriptions, the point where the "doughnut hole" begins in 2012.

The state Health Department said 190,000 of the 283,000 EPIC enrollees will see benefits reduced to Medicare doughnut hole coverage only; an additional 4,000 will no longer be eligible.

"I don't know what I'm going to do," said Kenitz, who lives in Galway in Saratoga County. The $591 monthly medication cost is "more than half my Social Security. I can't go without these drugs. But my medication is not the only bill I have. If I get all these medications, there's nothing left."

EPIC has helped low- to moderate-income adults 65 and older afford their medication in two ways: capping copays at $20 per prescription and subsidizing Part D premiums.

One tier of the subsidy system paid up to $38.69 a month to help extremely low-income people (a maximum $20,000 annual income for single people, $26,000 for a married couple) pay their Medicare Part D premiums. That part of EPIC was expanded in July when the maximum income levels were increased to $23,000 for single people and $29,000 for couples.

The second tier was for people with incomes of up to $35,000 for a single person, $50,000 for a married couple. They received a credit of up to $464 toward their Part D deductible. That program was eliminated in July.

Although there are no membership fees or deductibles in the reconfigured EPIC program, the elimination of the copay benefit for people like Kenitz will be a financial squeeze that will be hard to bear, AARP New York says.

To be eligible for EPIC, people will be required to enroll in a Medicare Part D plan. Previously, that was not always the case.

But beginning Jan. 1, "there are no exceptions," EPIC director Alan Ball wrote to EPIC participants in August. "If you are not enrolled in a Part D plan you will not receive EPIC assistance."

Income rules won't change. EPIC doughnut hole coverage is open to people 65-plus who have incomes up to $35,000 for a single person, $50,000 for a married couple.

In addition, EPIC will no longer pay for three days of medicine while a beneficiary appeals an insurance ruling when a Part D plan denies coverage of a drug.

After EPIC sent the letter about the upcoming changes, "the phones started ringing off the hook," said Cathy Roberts, a senior paralegal who works on health care access issues for the Empire Justice Center, an advocacy agency in Albany.

"We're especially worried about people who take expensive drugs like those [for] cancer and MS," she said.

AARP will push to roll back the cuts when the legislature reconvenes in January.

Roberts said people may find some relief through drug discount cards, the assistance programs of pharmaceutical companies and charities. More information is available at NeedyMeds.org.

Winnie Yu is a writer living in Albany, N.Y.