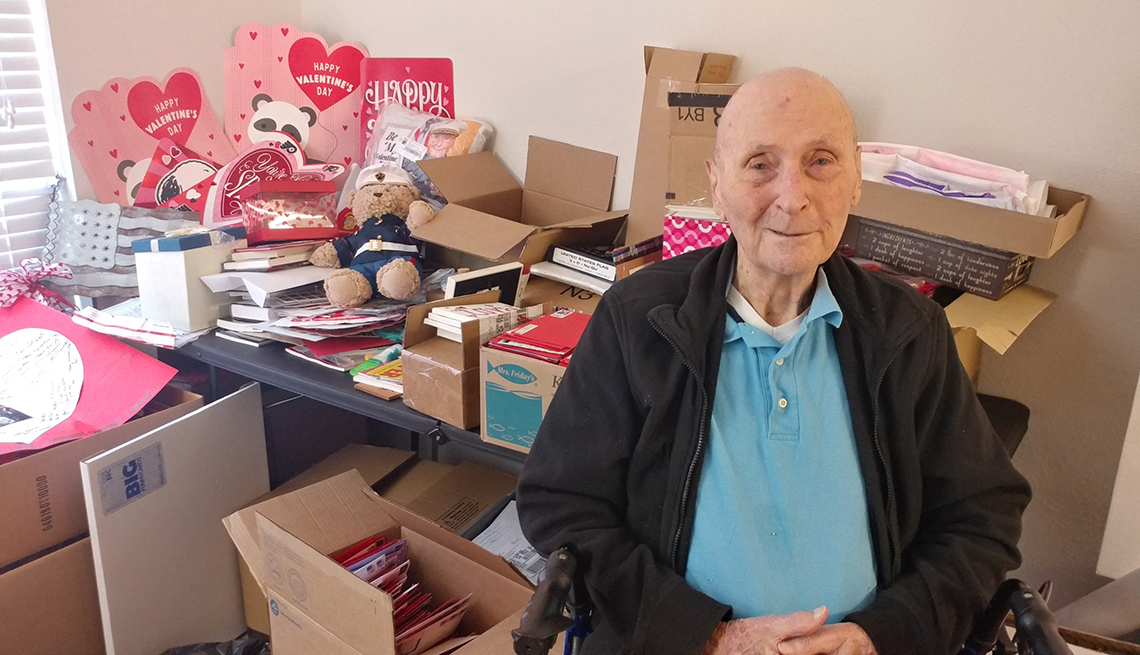 A 104-year-old World War II veteran is on a new mission, and he's asking for the public's help. Dubbed “Operation Valentine,” Bill White is soliciting holiday cards from friends and strangers alike to create a Valentine's Day scrapbook. The retired Marine Corps major and Purple Heart recipient first got hooked on scrapbooking in 1934, when he started boot camp and began saving everything he could get his hands on.

"I just had a desire to keep a record of the things I had done,” White says. “My mother also saved papers, letters and other records, so I guess I took after her."

Valentine's Day cards can be mailed to:

The Oaks at Inglewood

A fellow resident at his assisted living home in Stockton, California, suggested it would be fun for White to receive Valentine's Day cards from the public to put in a scrapbook. “So, I put the word out, thinking we might get about 100 of them. Boy did we — and more,” he says.

To White's surprise a resident's social media post garnered widespread attention online and spread to local and national news outlets. So far, White has received about 50,000 Valentine's Day cards — and they keep pouring in. He expects the total to reach close to 100,000 by Feb. 14.

"It's indescribable,” he says of the flood of mail. “I never imagined people would send me so many cards, in my wildest imagination.” White's daughter, Mary Huston, says her father constantly shakes his head in disbelief whenever they talk about how many cards have been delivered to him.

The veteran recounts how, in 1945, he was sent to Iwo Jima, a Pacific island that was the scene of fierce fighting between U.S. and Japanese forces, and was told to relieve another Marine upon his arrival. Once he tapped his fellow service member on the shoulder to switch positions, he realized the man was his lone brother-in-law. They only had the opportunity to say hello and then goodbye.

Weeks later, White led his men in the direction of the Japanese front line. Under fire, a Japanese grenade hit close to White, slamming him against a wall. He was listed as a “GSW,” meaning gunshot wound, and was sent back to the U.S. despite his protests.

What happened in Iwo Jima still resonates with White to this day. He says of all the Valentine's Day cards he has received so far, his favorite is one showing the iconic image of the American flag being raised on Mount Suribachi.

When asked what his secret to longevity is, he answered, “Just keep breathing."