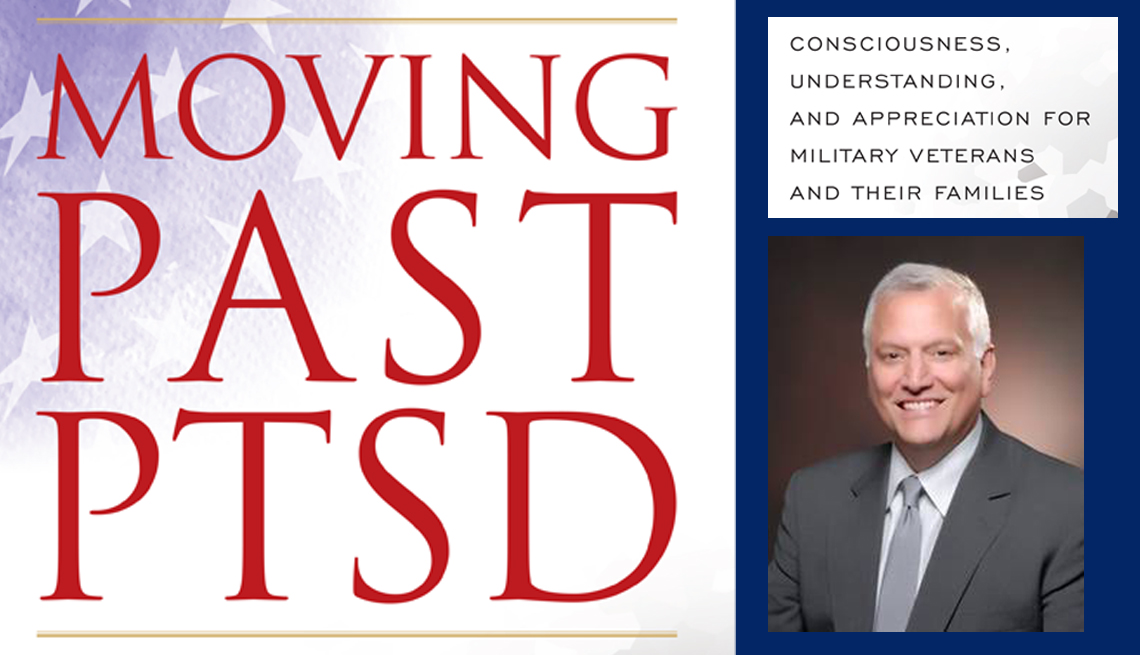 When service members return from the line of duty, some find that their brain remains in the war zone, making it difficult to assimilate into the home, community and society. Up until 1980 this experience was called combat fatigue or being shell- shocked; today it is known as post-traumatic stress disorder (PTSD).

“The member comes home and the family also has PTSD,” says Jaime Parent, an author and retired Air Force lieutenant colonel. “Not that they have it the same way as the veteran does. But they are experiencing their loved one who is going through a crisis.”

Parent’s book, Moving Past PTSD: Consciousness, Understanding, and Appreciation for Military Veterans and Their Families, contextualizes PTSD, documents veteran experiences and provides success stories of those who have overcome the disorder.

“A lot of the veterans were telling me that their trip overseas on deployment was easier than actually coming back home,” he says.

Parent hopes that by describing a variety of veteran experiences, his book will give the public a greater understanding and cut through biases and misconceptions that, he says, “exist on both sides.”

“Now that we call it PTSD, we understand it a little better,” Parent says.

This condition exists not only in veterans who have freshly returned from deployment but also in those well after their wartime experience —through nightmares or by encountering feelings experienced during war.

Fifteen percent of Vietnam veterans were diagnosed with PTSD at the time of the most recent study, in the late 1980s, and an estimated 30 percent of those who served in Vietnam have been afflicted, according to the “National Vietnam Veterans Readjustment Study.”

Veterans and service members of more recent wars feel the impact, too. Approximately 12 percent of Gulf War veterans and 11 to 20 percent of those who served in Iraq and Afghanistan are also affected, according to the Department of Veterans Affairs.

Veterans experience PTSD later in life “because they’ve retired and they have had a chance to think about things,” Parent explains. “Maybe they will go to the VA and talk to other veterans. Anything that brings that memory back from years gone past, to today, leaves somebody vulnerable for a PTSD flashback.”

Other times medical problems related to older age can cause veterans to be more vulnerable to the disorder.

“Sometimes a veteran will have PTSD symptoms shortly after the event, and then with medication or, perhaps, self-medication the symptoms may be relieved a little bit,” he says. “But as they get older in life and maybe they aren’t drinking as much, their symptoms can come back and seem even worse.”

Parent believes that because family and friends are experiencing their loved ones in crisis, they should also be involved in treatment. A PTSD sufferer’s loved ones can benefit from individualized help and support from their own friends, he says.

“The family is confused and oftentimes scared because they hear in the middle of the night these horrible dreams, manifesting [themselves] at three in the morning,” Parent says. Despite being in a warm, comfortable bed, veterans may act out because the condition keeps their thoughts back in Afghanistan or Iraq. “One veteran told me he could no longer sleep on the bed anymore; he had to sleep on the floor.”

Most important, Parent finds that veterans suffering from PTSD need to find their sense of purpose again.

“I think that’s one thing that could help the veteran maybe feel better about themselves,” he says. “If you look at veterans, a lot of them go into services where they continue to serve. For example, some of them are teachers or policemen or firefighters.”

Excerpt from Moving Past PTSD: Consciousness, Understanding, and Appreciation for Military Veterans and Their Families, from Rowman & Littlefield Publishers.

“War is the most brutal aspect of human existence. War encompasses all that is evil in the world — death, torture, excruciating pain, rape, dismemberment, and sorrow — in the name of an ideology, government, or religion. Its scars extend beyond the warfighter to family, friends, and colleagues. The act of going to war is often decided by those who do not go to fight and, perhaps, never donned a uniform. But for those who do go, the complexities and mistakes made during war can be widespread and last a lifetime.”