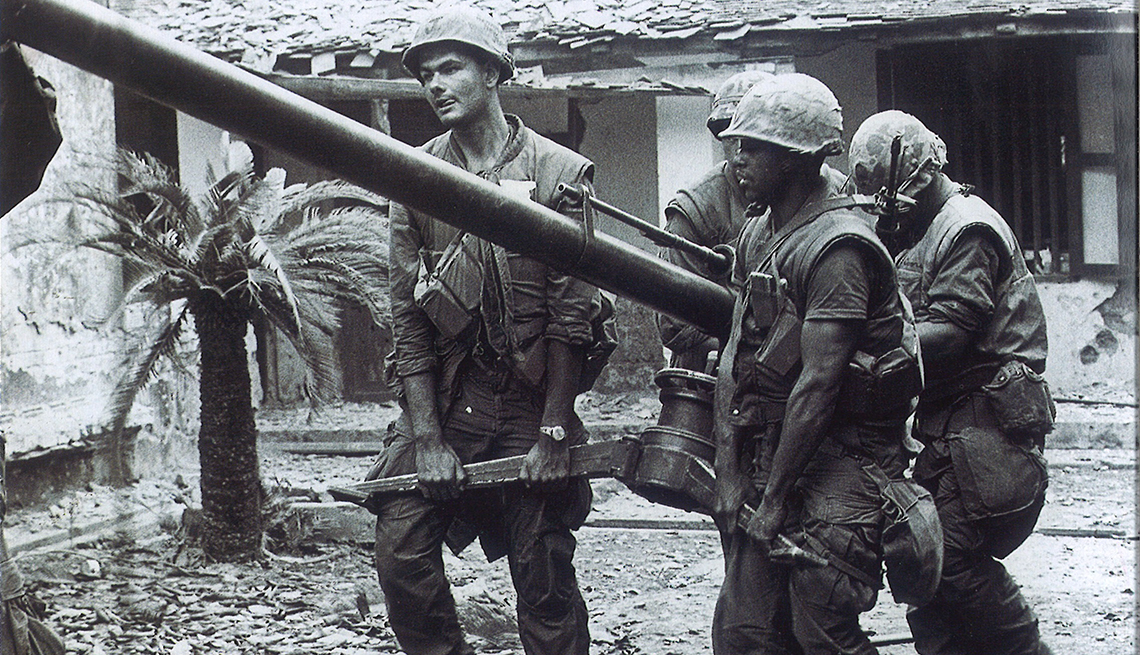 Bob Wallace (far left) helps carry a 400-pound 106mm recoilless rifle through the streets of Huê´, Vietnam, during the Tet Offensive in 1968.

The Vietnam War helped shape a generation of Americans, none more than the 2.7 million who served in Southeast Asia. In honor of National Vietnam War Veterans Day on March 29, signed into law in 2017 by President Donald J. Trump, AARP spoke with six veterans of the war about their most vivid memories — and about what they want Americans today to know or remember. 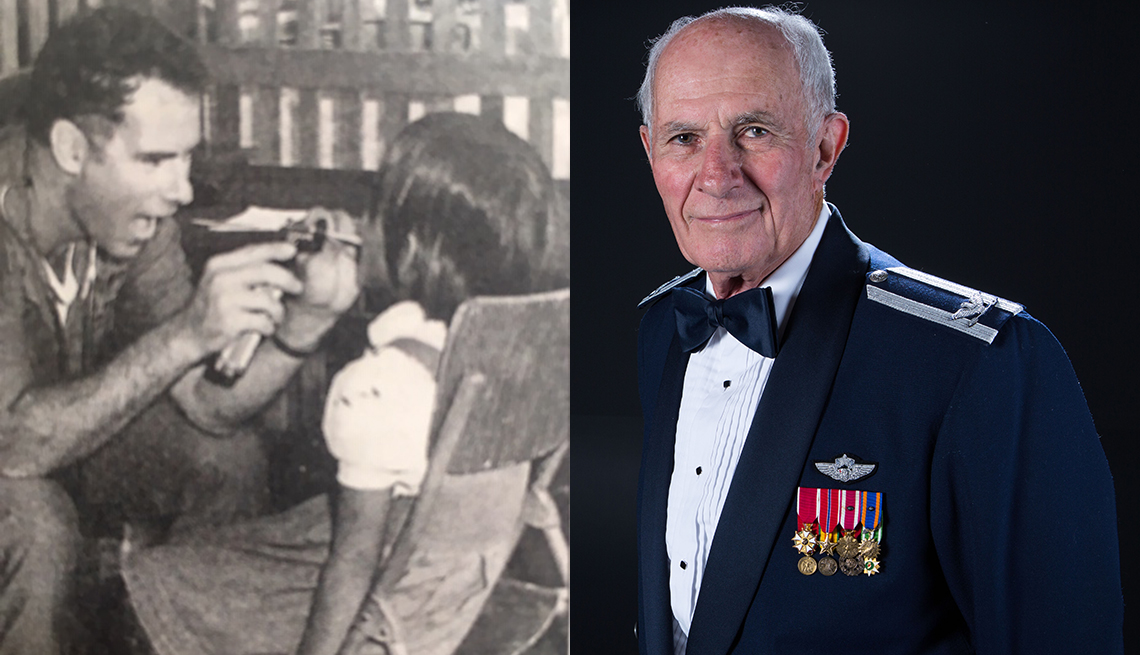 Most vivid memory: his first time landing in Vietnam, after being stationed in Tokyo

“We had flown a 10-hour reconnaissance mission from Okinawa, along the coast of China, then into the Gulf of Tonkin, and did reconnaissance between Haiphong and Hainan Island, which was Chinese. When we landed at 2 in the morning, we got out of that airplane — and understand, this is my first trip to Vietnam. It’s hot and it's sticky. The Marines are on Monkey Mountain, artillery is firing out into the jungle, there are flare ships dropping flares. I got a sidearm and bandolier ammunition. And to be frank, when I think back, I think, How did I get into this John Wayne movie, anyway?”

“I think the most important thing is that going to war is such an important decision made by our political leaders. And when you think back during my lifetime, World War II, clearly the Japanese attack on Honolulu precipitated that. The second nation conflict was Korea, and Harry Truman made a decision to stop the aggression from the North into the South. Vietnam, that was something that we just kind of wandered into over a period of years. So going to war, I think, is one of those critical things that a president and Congress does. And we haven’t done a decent job, since World War II and Korea, in debating and articulating what the mission was and what our goal was and what our strategy was.”

Harman was drafted in 1967 and served in Vietnam in 1969, as a crew chief and door gunner on a “Huey” helicopter for the Army. He was the Veterans of Foreign Wars national commander from 2017 to 2018. 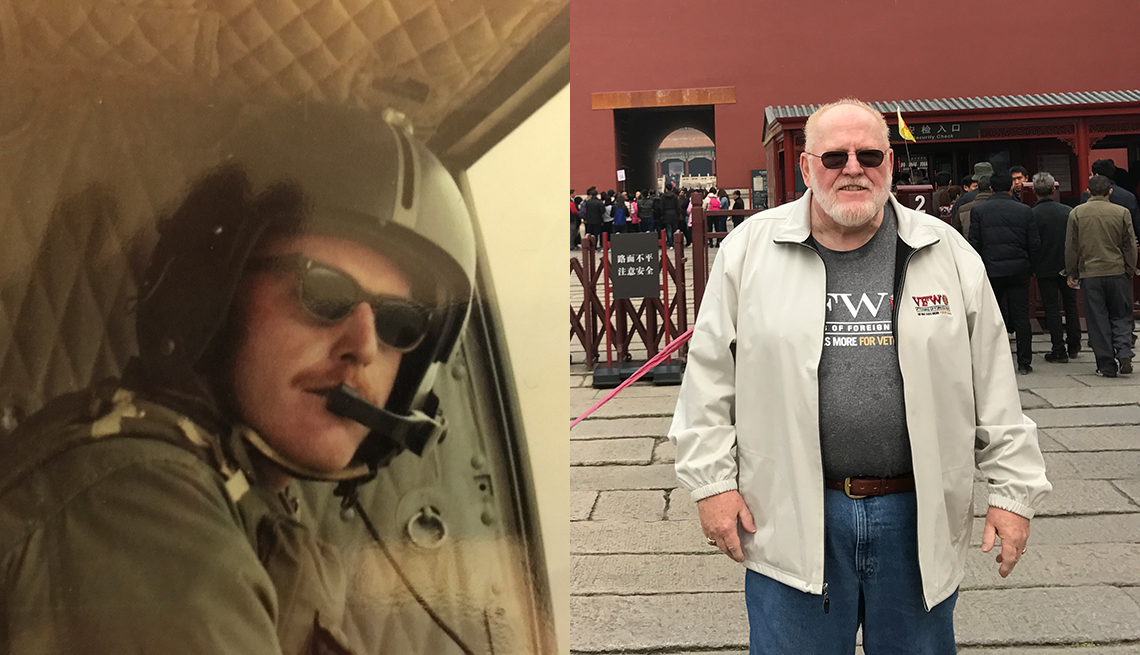 Keith Harman in a Huey Helicopter during the Vietnam War (left); Harman on his return visit to Vietnam in 2017.

Most vivid memory: being caught under fire in his helicopter on his first mission

“I remember my maintenance sergeant trying to talk me out of becoming a crew chief, but I wasn’t listening. On my first assault mission, my aircraft was badly shot up, but we didn’t go down. The first thought that came to mind was, Maybe I should have listened to my maintenance sergeant. I had a good guardian angel and continued to fly for the remainder of my tour.”

What Americans should know: Servicemen did what was asked and looked after one another.

“When you serve in the military, you are taught discipline. The company that I served with was told that we were going to Vietnam, so off we went. We did what was asked of us, and we looked after those that we served with. I have been back to Vietnam, and it is altogether different from when I left 49 years ago.”

Tharp served in the Army from 1969 to 1970 and was a correspondent for an Army magazine called the Hurricane. 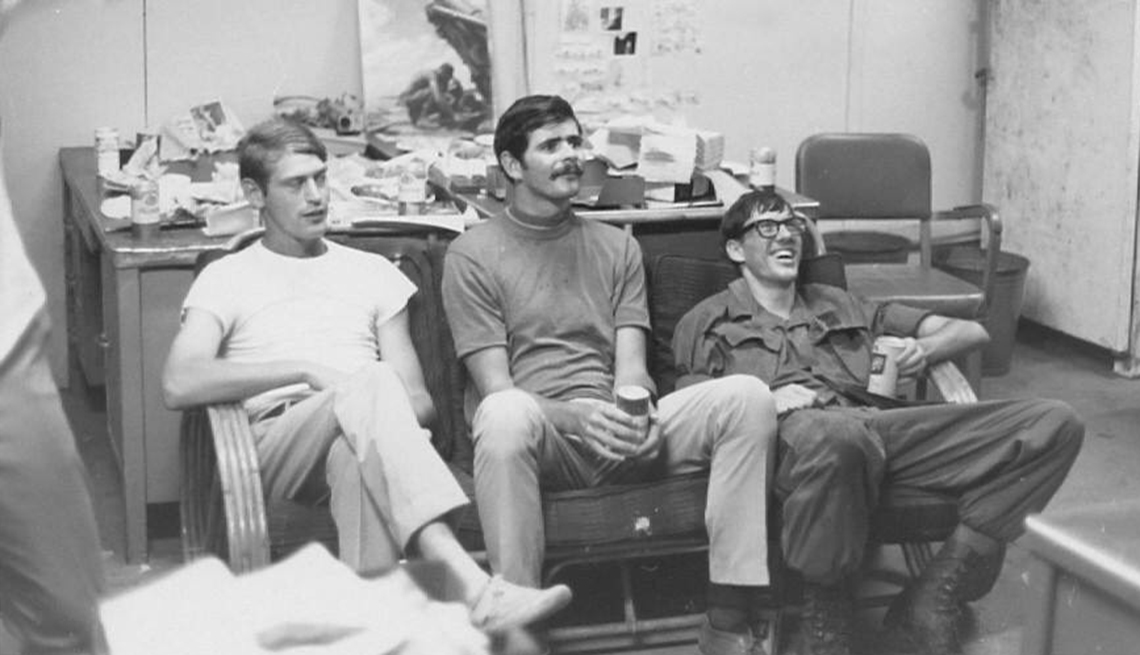 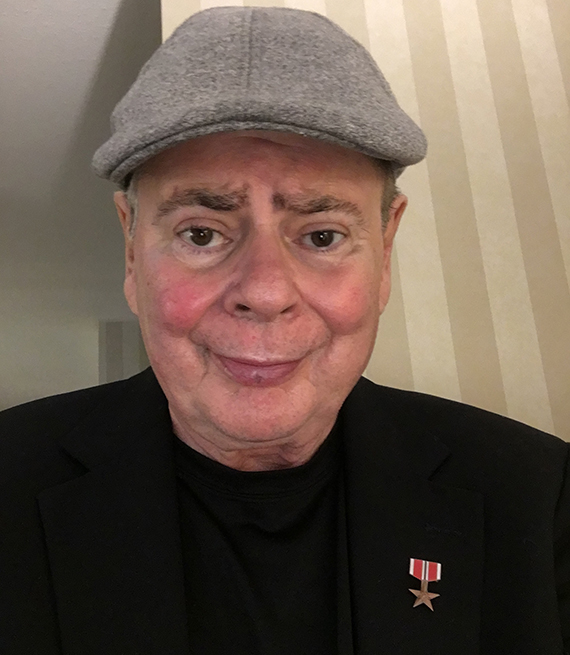 Most vivid memory: being shot at for the first time

“I was on guard in a wooden tower on the front perimeter which faced Highway 1, which ran into Saigon about 30 miles south. There was fire coming from the Vietnamese village across Highway 1. I was in the bunker, the elevated bunker, and every eighth or ninth round was a tracer round — red or green. So you know when you saw tracers, there were a lot of bullets you didn’t see. The tracers started coming over the guard shack where I was standing, 20 feet above the ground or so. And I bent down below the sandbags with just my head and my helmet peering over, and I peed my pants.”

What Americans should know: Too many lives, both American and Vietnamese, were lost.

“We should have never gone into that war. We went in there in Vietnam and wasted 58,000 American lives and hundreds of thousands of Vietnamese. And when I speak of Agent Orange, about 4 million Vietnamese were exposed to Agent Orange, and several hundred thousand of them died, and many of their children and grandchildren are messed up because of it. I think the bottom-line lesson is that we should not go to war unless it is clearly in our national interest, and there are very few places that would qualify for that in the world.”

Rivers served from 1969 to 1971, as an Army infantry officer advising a Vietnamese military infantry unit. 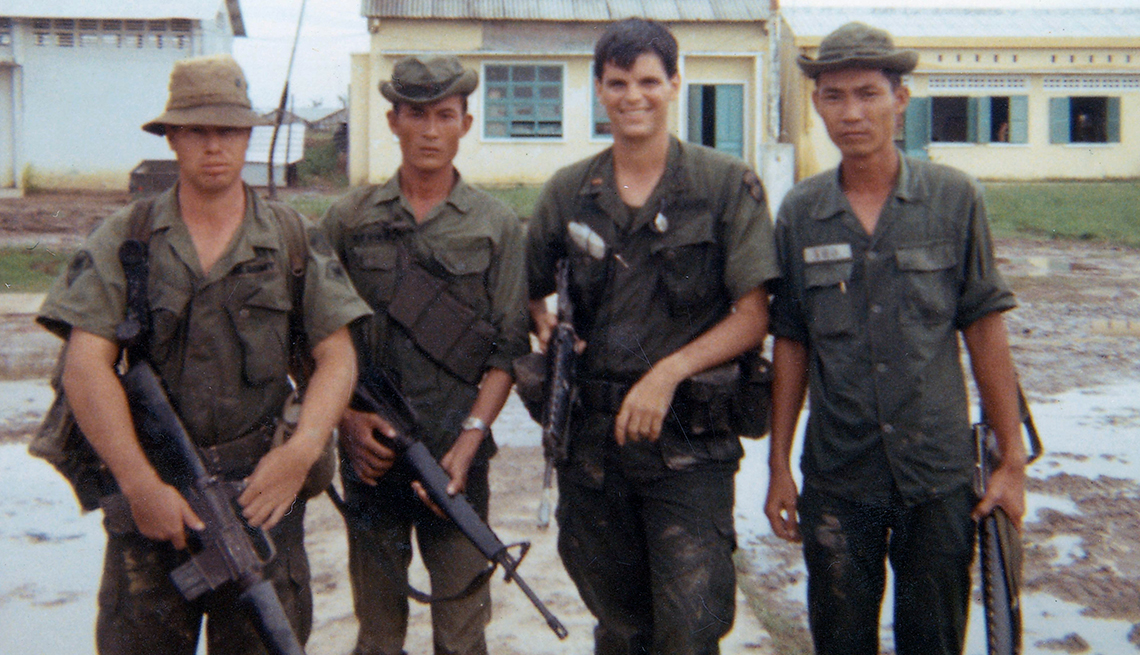 John Rivers (second from right) after his final combat operation. 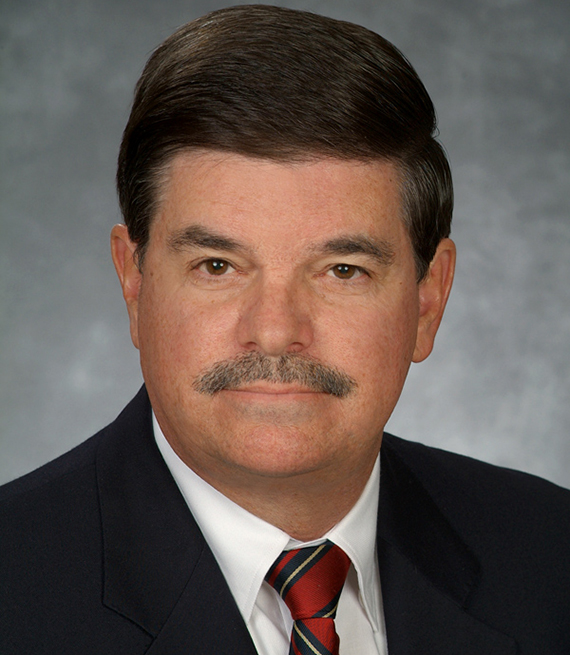 Most vivid memory: personal relationships with Vietnamese soldiers and families

“We pretty much lived and worked with the Vietnamese. And that gave us, in most cases, a significantly different view of the war than people who were in your typical American units, who simply viewed the Vietnamese as ‘the other guys,’ so to speak. I developed great respect and affection for the Vietnamese when I was there. Primarily because I had so much exposure to them and their families.”

What Americans should know: Vietnam veterans served with as much sacrifice as any in American history.

“The men and women who served in Vietnam were as important to our country as veterans who have ever served since the time of the American Revolution. Those who did not come back alive made as great a sacrifice as any solider who died at Iwo Jima or Omaha Beach or any of the other major battles of World War II. The grief and the sorrow of their families was as profound as the grief of any family who lost a family member at Guadalcanal or the Battle of the Bulge or any of the other battlefields of our wars. For those of us who served, our experiences as soldiers was very similar in many respects to the soldiers who fought in other wars.” 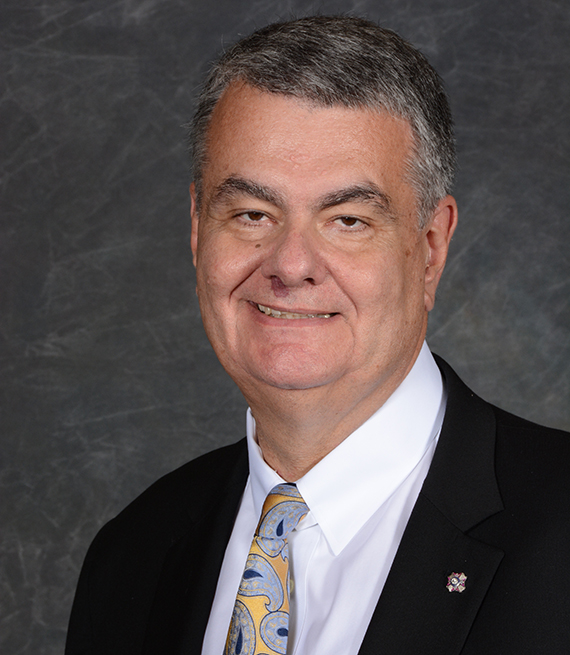 Wallace served in the Marine Corps as an infantryman. He is now the executive director of the Veterans of Foreign Wars Office in Washington, D.C.

Most vivid memory: fighting in the Battle of Huê´ during the 1968 Tet Offensive

“Many casualties on both sides, but exceptional esprit de corps by my fellow Marines.”

What Americans should know: Most who served volunteered for duty.

“Americans should know that those of us who fought in Vietnam answered our nation’s call, and most of us were volunteers. We served with honor and distinction.” 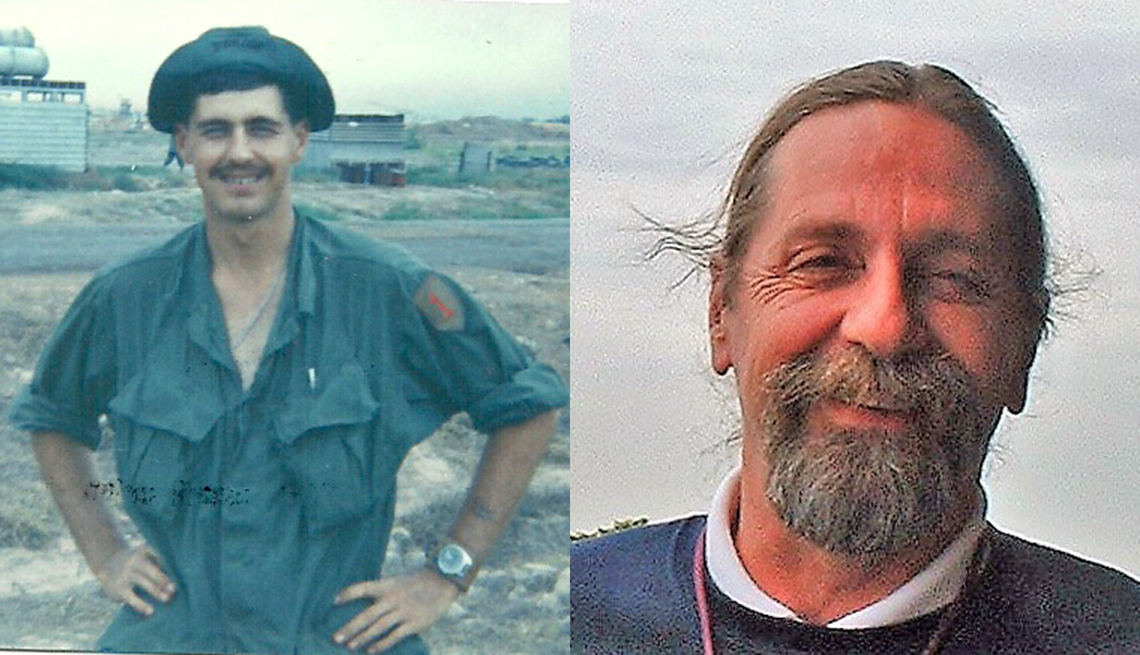 Most vivid memory: being wounded in a blast on patrol, along with a wartime buddy, Willie Henry, and not knowing what happened to his friend until 26 years later

“After two to three weeks of recovery, I was back out in the field and never did find out what happened to Willie. For years and years, I didn’t know how to get a hold of him. I didn’t know anything. And so when the [Vietnam] memorial was built, I looked for his name, didn’t find his name, which was a good clue that he was still alive. And for some reason, I thought he was from Chicago. So every time I traveled through O’Hare, I would grab the phone book, back in the days when they still had phone books and pay phones, and I called every Henry in the Chicago phone book and relay the story: ‘So, do you know this guy, I’m trying to find him.’ ‘No, never heard of him.’

“So in ‘96, a friend of mine was appointed to a job at the Department of Veterans Affairs as a deputy or assistant secretary for something or other. And I relayed the story to him, and he says, ‘Well, look, I can’t give you any information. But if you send me a letter addressed to Willie, I will forward it to him. And if he wants to contact you, he can do that.’ So I did that, and about a month later I was in D.C. I was on the board of Vietnam Veterans of America at that time. And I was in my hotel room, and the phone rang, and it was my wife.

“She says, ‘You got a message on your machine that I think you’re gonna want to hear.’ So she held the phone over the machine, and it was Willie, who called and said, ‘I got your letter.’ I called him and left a message on his machine. About an hour later, he called me back at the hotel, and that was when we connected, 26 years later.” [Willie, it turns out, was in Chattanooga, Tenn.]

What Americans should know: The men who fought didn’t create the war.