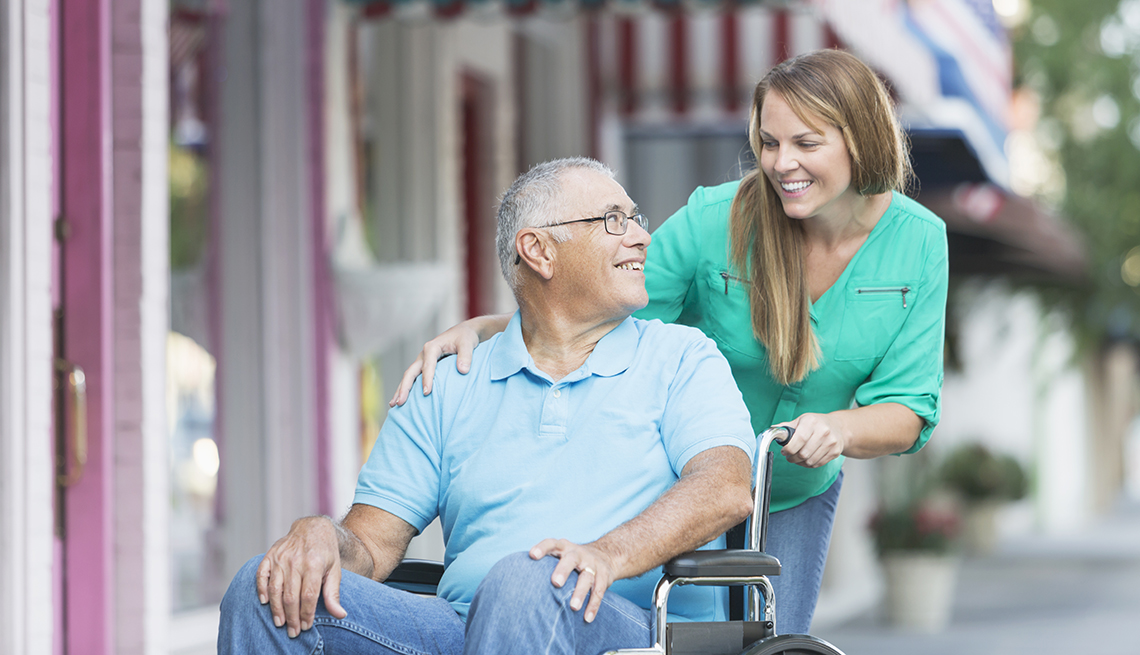 En español | Through May 5, the Department of Veterans Affairs (VA) is seeking public comment for a proposed rule to “improve and standardize” its caregiver benefit program.

However, for the thousands of veterans injured in the line of duty before Sept. 11, 2001, it remains unclear when they will be eligible for any of the benefits in the Program of Comprehensive Assistance for Family Caregivers.

The VA’s aging computer systems have been a roadblock to expanding the program to include veterans injured — mentally or physically — in the line of duty before Sept. 11, 2001. Legislation called the Mission Act was passed in May 2018 to broaden the caregiving to veterans of all eras.

"We shouldn't have to spend valuable time and energy ensuring that our veteran receives the care and services they need."

In the latest proposal for public review, the department says it intends for the first phase to begin “on the same day that our other proposed regulatory changes go into effect. However, we recognize that the timeline for development of an information technology system can be unpredictable.”

The agency previously had said that the first phase would begin this summer.

“The plan is for us to launch expansion the summer of 2020,” Lisa Pape, deputy chief officer of patient care services for the VA, said in November. “We’re waiting to get our IT system built and working as well as we can. So we can then launch to expand for all of those caregivers currently not being seen.”

During the 60-day public comment period, the agency hopes to expand its definition of serious injury to include any service-connected disability — regardless of whether it resulted from a disease, illness or injury. It will further specify what it means to need personal care, including for those with neurological or mental health conditions.

Additionally, the VA is proposing changes to how monthly stipends are paid, including advance notice requirements to improve communication between the agency and caregivers.

The department has begun hiring 680 regional staff members and has begun placing them ahead of the expansion, Jennifer MacDonald, a physician and VA Mission Act lead, told the Senate Veterans Affairs Committee in February.

“This proposed legislation would improve the assistance we provide to help ensure our most vulnerable veterans can stay in their homes with their loved ones for as long as possible,” VA Secretary Robert Wilkie said in a statement.

For now, veterans who served after Sept. 11, 2001, can appoint a primary caregiver and up to two secondary caregivers. Benefits vary but include:

• Financial assistance, lodging and travel expenses for a caregiver when traveling with the veteran to receive care

“We know that with our aging veteran population that people will need caregiving,” Pape says. “And our caregivers will need intervention or help. So, without the Mission Act, we couldn’t do it.”

Other portions of the Mission Act brought more options for urgent care and private health care to veterans of all eras in June 2019. However, the New York Times has reported that the program has insufficient money to support the network mandated in the law.

Not all veterans will be eligible for the added caregiver assistance despite having an ailment that the VA acknowledges is related to their military service.

In 2008, a VA-commissioned study found that veterans are 50 percent more likely than nonveterans to have amyotrophic lateral sclerosis (ALS), better known as Lou Gehrig’s disease. Later, ALS was made a presumptive compensable illness, meaning veterans are not required to prove when they acquired the disease.

More than 4,000 veterans received clinical services from the Veterans Health Administration during the 2019 fiscal year. This estimate does not include veterans who received services before 2019 or those not enrolled in the VA system.

“It’s taken a long time for the VA to catch up to what the needs are for these veterans."

“It’s taken a long time for the VA to catch up to what the needs are for these veterans,” says Mary Ward of Wilmington, North Carolina. She cares for her 65-year-old husband, Tom Ward, who served in the Marine Corps and now has ALS.

“If I had a wish list — what do you want for Christmas? — I would like to have a subject-matter expert case manager at the VA who could track down the things that I need for Tom,” she says.

Ward, an Elizabeth Dole Foundation fellow and host of the podcast This Caregiver Life, noted that her husband presents an interesting dichotomy as a pre-Sept. 11 veteran with a post-Sept. 11 diagnosis.

“We shouldn’t have to spend valuable time and energy ensuring that our veteran receives the care and services they need,” says Lara Garey of Austin, Texas. She is also an Elizabeth Dole fellow and caregiver for her 51-year-old husband, Tom Garey, an Air Force veteran with ALS.

“We need to spend that precious time … making those memories that will carry us over after they pass,” she says. “We all know what the end result of this disease is: The veteran will die.”

Despite both husbands’ having served during wartime, Ward and Garey say they don’t think their cases will be included in the caregiving expansion because ALS is a disease and not an injury.

When AARP asked whether a veteran with ALS would be eligible for the expanded caregiving benefit, a VA spokeswoman said that the department “can’t comment on regulations until they are made public” and that eligibility is determined case by case.

Some military families contend the VA should offer caregiver benefits to all veterans regardless of injury.

Patti Shea of Tallahassee, Florida, has been a caregiver for her 80-year-old father, James Shea, who has dementia and chronic obstructive pulmonary disease. He served in the Marine Corps in Vietnam before the full campaign and therefore is ineligible for full aid and attendance benefits, a program that provides an additional pension.

She started caring for him in October 2011, when he didn’t need constant help, but in the past few years he has required “100 percent care,” she says.

“Any plan that will extend benefits to the caregivers is something we need more of.”

In terms of what the veterans are eligible for, the VA benefits system is “very tiered,” she says. The benefits her father receives still include one month of respite a year, home health nurses and a home improvement grant.

If her father had qualified for aid and attendance, “the next tier up,” he would receive the nursing hours she says he needs.

“Fifteen hours a week is not a lot for somebody who is 100 percent dependent on everything,” Shea says.

“Any plan that will extend benefits to the caregivers is something we need more of,” she says. “We need to look out for the caregivers, especially the ones who are keeping their loved ones at home, because they’re saving taxpayers tons of money.”

Shea also cares for her mom, who has developed rheumatoid arthritis since the onset of her father’s conditions.

“When my dad is having a really bad day and is yelling at me, it affects you,” Shea says. “It’s hard to clear it out of your brain because this is my dad. My dad had never raised his voice at me once.”

Veterans who don’t qualify for the expansion can apply for the Program of General Caregiver Support Services, which includes education, peer mentoring, self-care courses and training. It is available for veterans of any era, regardless of illness or injury, who are enrolled for care in the Veterans Health Administration.

Editor’s note: This story, originally published Nov. 8, 2019, was updated to detail the public comment period and elements of the proposal.