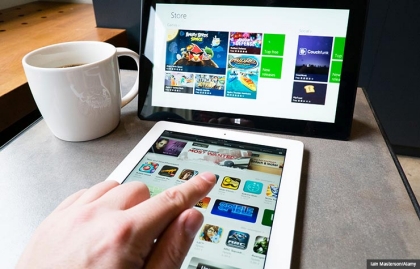 En español | Nonexistent as recently as 2009, the tablet market has exploded. Even as "phablets," such as Samsung's Galaxy Note and Apple's recently launched iPhone 6 Plus, have increased in popularity and nibbled at the market, sales of full-blown tablets have mostly held steady. Last year, nearly 200 million tablets were shipped worldwide, and in the first half of 2014, more than 100 million were sold. According to a 2013 Pew Internet study, more than a third of all Americans over the age of 18 own one. Among those between ages 50 and 64, 32 percent own a tablet, and 18 percent of Americans over 64 are tablet owners.

At this point in the tablet's evolution, most devices can reliably offer sharp screens, vivid cameras for photos and videos, and access to myriad video, music, apps and books. We've chosen these standout devices for overall functionality, reliability and price. But, you might ask yourself, which is right for me? Read on.

Upon its release last year, the iPad Air raised that standard. It's a slimmer, faster version of its predecessor, the now-discontinued iPad 4, and sports the same crystal-clear retina display. With a 9.7-inch screen, the Air lives up to its name, weighing in at a single pound, more than a half-pound less than the iPad 4.

The iPad mini also got a 2013 makeover, with a faster processor and the retina display of its bigger sibling. Both iPads can run iOS 8, the latest version of Apple's operating system. The benefits remain consistent: iPads are intuitive, hyperfast, useful and fun, at whatever size.

For those partial to reading, the mini may be a better choice (I can't be the only one with bruises on my nose where my iPad has whacked me after I've drifted to sleep while reading in bed), but for video consumption the larger screen offers fantastic clarity. The depth of inventory at iTunes and the App Store is nearly unmatched, and it's easy to navigate.

Amazon's latest version of its popular tablet is a sleek device available in two sizes: the bigger is 8.9 inches and its smaller counterpart is 7 inches, roughly the size of a trade paperback. As an e-reader, with its lower price and seamless integration to the Amazon bookstore, that 7-incher is at the top of the tablet heap.

The tablet runs Amazon's Fire OS 3.0, a variation of Android, and sports a higher-resolution screen than its predecessors. Videos look great, and Amazon Prime subscribers get access to the Amazon Instant streaming service as part of their $99 yearly membership fee. HDX owners who are also Amazon Prime members get the ability to download videos for offline viewing.

The selection at Amazon's app store isn't quite as robust as some, and its built-in Silk Web browser is a bit clunky. But battery life is strong. The device can easily run a full day on an overnight charge, and longer if you're using it mostly for reading. If you need help with the tablet, just tap the cool new MayDay icon and you're quickly connected, via video chat, to an Amazon tech adviser who can answer questions and, with your permission, take charge of the device to walk you through your issue.

Microsoft recently introduced the new Surface Pro 3, which is more of a laptop replacement than a portable tablet. For those seeking a powerhouse tablet that does a lot more than just entertain, the Surface 2 — introduced last year — could be the choice. With a 10.6-inch screen, it's larger than brethren devices, and even at a relatively light 1.42 pounds, it can feel a bit bricklike in comparison with the iPad Air or other smaller tablets.

The Surface 2 runs Windows RT 8.1, the latest version of the Microsoft operating system. That means it comes equipped with the Microsoft Office suite, including Word, Excel, Outlook and PowerPoint. One key caveat is that if you plan to use the Surface for such tasks, it's pretty much imperative that you have a keyboard, which Microsoft sells separately. Tacking on another $80 to $120 for a touch keypad, which also doubles as a cover for the device, isn't incidental.

The Surface 2 sports a screen that, to my eye, matches Apple's vaunted retina display. Consuming media on the device is enjoyable, and its integration with Xbox video and music services make it a good choice for a family that already owns the gaming console. The Windows Store selection pales in comparison to its competitors, but the device arrives loaded with helpful news-gathering and travel apps that personalize your experience the more you use them. And its built-in Health and Fitness app is miles beyond similar offerings from its competitors, offering health news, trackers, fitness plans, recipes and symptom checkers, all within a few taps and swipes.

It's hard to consider Google an underdog in anything, but the search engine giant was late to the tablet game, releasing its Nexus 7 in summer 2012, more than two years after Apple unveiled its first iPad. In this realm, that's an eternity.

But Google has quickly made up for lost time, and the second-generation Nexus 7 has made it a major tablet player. Though the Nexus 7 sports the same 7-inch screen as small tablet competitors such as the HDX and the iPad Mini, its chassis is notably thinner, making it much easier to hold in one hand.

And it's an impressive, powerful handful. The Nexus 7 runs Android, Google's ubiquitous mobile operating system, and features a shimmering, 323-pixel-per-inch screen that delivers eye-popping clarity. It's zippy, too, allowing users to toggle seamlessly between apps and tasks.

Games and apps are available through the Google Play store, as are videos, music, books and magazines. The store doesn't yet match Apple for ease-of-use or depth, but it's getting there. One new app is worth pointing out: Google Helpouts, available as a free download from Google Play, allows a user to get expert advice on any subject, via video chat. It's similar in function to Amazon's MayDay feature, but where MayDay is designed to help the user learn the device, Helpouts are meant to help the user learn about, well, anything, from cooking to car repair. That's Google for you.

Austin O'Connor covers television, film, gaming, gadgets and all kinds of entertainment for AARP.org. Follow him on Twitter: @austinjoconnor.