En español | From its infancy as a space-hogging console delivering grainy black-and-white images, through today's razor-thin screens projecting high-definition video, the television — and the array of programming it delivers — has become a fixture in the American home. 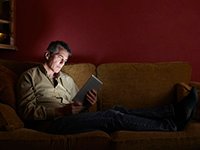 It is possible to ditch your TV and watch shows on your computer or a mobile device instead.

Now, however, you can watch almost everything on TV without a TV. And sometimes, with computers, tablets and smartphones, you can watch more than what's on TV. This season, for example, Kevin Spacey's House of Cards aired only on Netflix, not on any broadcast or cable network.

There are numerous reasons to ditch your TV, downsizing (who needs that big screen?) and economizing, chief among them. The average monthly bill for basic cable in the U.S. was $86 in 2011 and analysts say that will rise to nearly $200 by the end of this decade.

Of course, to watch online you need a connection through an ISP or data provider. Monthly high-speed plans can be purchased for as little as $10 a month, depending on the speed and data you require. But many online viewing options are free, and even the fee-based options cost far less than a monthly cable bill.

For the most part, it's entertainment programming that is easy and cheap to get on computers and mobile devices. News and live sporting events are another matter.

Channels such as CNN and ESPN — and many other cable networks, including premium channels such as HBO and Showtime — can be viewed online and on mobile only by cable subscribers. But for sports fans there are some a la carte options. Many leagues, including Major League Baseball and the NBA, offer subscription packages for online viewing all games during the season. These packages sound pricey — MLB.TV's package, for example, is $129.99 per season. Still, that's far less than seven months' worth of cable bills.

Network websites: The four broadcast networks — ABC, CBS, NBC and FOX — offer most of their shows for free on their websites. Some networks don't offer the most recent episode for a short time after it airs, but, typically, from three to five recent episodes of each show are available, and you can watch on your laptop, tablet or smartphone. You'll have to sit through a few ads — not as many as during a typical prime-time telecast — but you can watch just about any network show online, including nightly newscasts, morning shows, specials and lots of classic programming like The A-Team (at nbc.com) and I Love Lucy (at cbs.com).

Hulu: Hulu.com is a joint venture between the broadcast networks (excluding CBS). Think of it as a viewing hub, offering network shows, plus content from a roster of cable channels including USA, AMC and the Turner channels. Hulu is trying original content as well, and has exclusive U.S. rights to several foreign hits such as Israel's Prisoners of War, on which Homeland was based. A limited backlog of recently aired episodes of each show is available for free, but can be seen on a computer only, not mobile devices. The site has a pay option, Hulu Plus, explained below.

Hulu Plus: The pay version of Hulu costs $7.99 a month and offers access to a more expansive selection of series episodes (including full seasons of some shows). Subscribers can also watch all Hulu content on tablets and smartphones.

Netflix: For $7.99 per month, subscribers can watch any of the service's streaming content on computers or mobile device. Netflix offers a growing inventory of TV shows, but, for now at least, its catalog of current shows only includes their past seasons. House of Cards, one of the first Netflix original series, may offer a glimpse at TV's future. The show is available only on Netflix, and all 13 episodes of its first season were made available at once, catering to so-called binge viewers. In May, Netflix will use the same model for its revival of the comedy Arrested Development.

iTunes and Google Play: Both online portals offer just about everything on TV on an a la carte basis. You can buy, at about $2 per episode, individual episodes or full seasons of currently airing shows, plus a huge catalog of older programs. iTunes purchases can be viewed on a computer or iOS-compatible device; Google Play works on computers and Android devices.

Amazon Instant Video: Amazon's instant streaming service is similar to iTunes and Google Play, offering episodes and full seasons of a large inventory of shows. If you have Amazon's Prime service, which offers free shipping on select orders for $79 a year or $7.99 per month, you also have access to a catalog of streaming content, including past seasons of hits like Downton Abbey, Army Wives and Parenthood. Amazon Instant can be watched on computers and mobile devices.

Aereo: This buzzy start-up, which offers over-the-air broadcast networks to computer and mobile device users for a daily ($1) or monthly ($8) fee, has the potential to turn the TV broadcasting industry on its ear. For now it's only offered in New York — and expansion is bogged down by a lawsuit from broadcasters. But it's well-financed, and there are plans to add 22 more markets, including Boston, Chicago and Washington, D.C., in 2013.

Redbox Instant by Verizon: The Netflix competitor is still testing, with a full launch slated for March. For $8 a month, you get access to more than 5,500 streaming movies on your computer or mobile device, plus four DVD rentals from Redbox kiosks (no TV required for those either; you can just pop them into your computer's DVD player). As yet, TV shows aren't offered, but for those who watch a lot of movies, it could fill a gap.