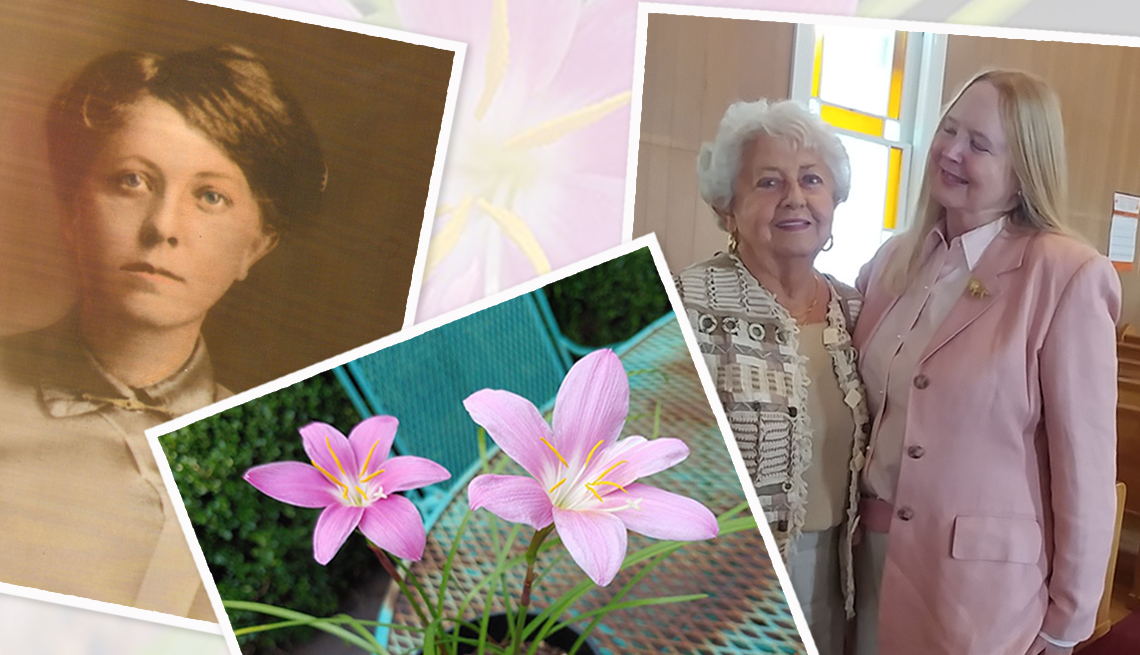 A collage of Ruth Almeda Derrick, (left) and Betty Harrington and Alanna Nash (right) at a family church in August 2019.

As the coronavirus pandemic has many of us yearning for simpler times and taking stock of what matters, the ties of family, past and present, are never far from mind.

I am reminded of this daily as I appreciate the glorious magenta-and-white blooms of my rain lilies, grown from bulbs descended from those of my maternal grandmother, Ruth Almeda Derrick.

To me, these flowering plants are nothing short of a miracle. My grandmother, a woman I barely knew, died in 1959. To think that I now gaze at the very flowers that once gave her pleasure connects me to a long-ago world in a way I never thought possible.

The bigger surprise is what familial offshoots they have sprouted. It began in 2017, when I posted pictures of my grandmother Derrick on Facebook for Mother's Day. Though we shared a birthday, I had never really known her, apart from the values she had handed down through my mother, Emily. ("If you've come here to gossip, you can just go home.") I heard about her beautiful sewing, how she made her children's clothes and embroidered the pillowcases they slept on. 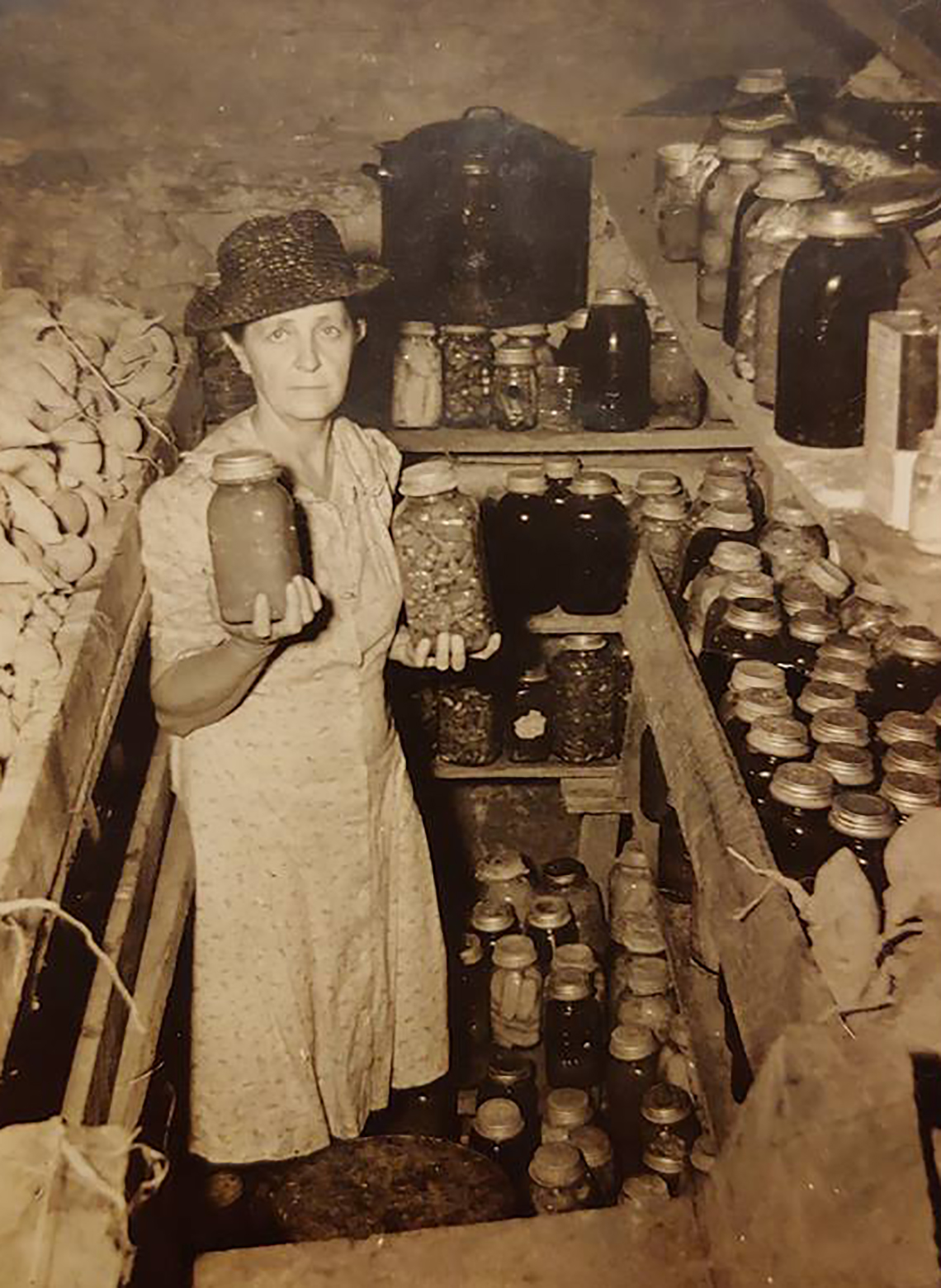 Ruth Almeda Derrick in her cellar.

But I have only one very fleeting mental snapshot of her, standing in her kitchen in rural Sevierville, Tennessee, cooking on an old-fashioned stove. My immediate family lived in Louisville, Kentucky, and before the interstate, it was a long and arduous trip to my grandparents’ home in the Smoky Mountains.

My mother was with Ruth when she died of a stroke, at 68, but Mom, who had hoped to inherit her linen trunk (she probably didn't make her wishes known in time), never had a memento of her, a regret that she always mourned. And all I had from my grandmother was a bathing suit she sent me when I was 6, a present so unexpected and cherished that I balked at getting it wet when my family went to the ocean in Virginia Beach.

My Facebook post yielded many responses, including two I could never have imagined, both of which came through tagging my treasured cousin Betty Harrington, the Derrick family historian who had always been my living link to East Tennessee.

The first was a photo of a family gathering circa 1951, in the very kitchen I had remembered. There sat my grandparents — whose faces I recognized only from two old photographs — surrounded by various aunts, uncles and cousins, including Betty as a girl, and my mother's sister, Illa, and her daughter, Sue. My grandmother held my cousin Bill Duncan, then a small baby, of whom I had just one brief memory before we reached our teens.

The photo yanked me back in a dizzying swirl of time to when I last stood in that kitchen, at the age of 8. I burned for the lost years and relationships and took note of the poster's name, Melanie Vaughn Duncan, Bill's wife.

Soon, Melanie and I began corresponding, and she sent me pictures of my grandfather that I had never seen. Later, in a thrilling cascade, she sent photographs of all the family, including Bill, with whom I soon scheduled a long-overdue phone call. I asked him about our grandmother. “She was a good lady, boy, just as kind as she could be,” he said. “She'd give me a nickel every time I'd go the creek and get a bucket of water."

My Mother's Day post also brought an astonishing message from Debbie Rolen Williams, Aunt Illa's granddaughter and Sue's daughter. “Yesterday, I saw the picture of Popaw Derrick's kitchen and it touched me deeply [and] stimulated in me an emotional and sensual memory,” my cousin wrote. “I remember the house, the smells, the way the porch felt to stand on it and look at all the rocks in the yard.”

And so began a wonderful correspondence, in which she mentioned that my grandmother had grown little rain lilies. I had no idea. I knew that grandmother Derrick baked something sweet every day — usually, a pie or cake or cookies — but I hadn't known she'd grown flowers. Then, Debbie said the lilies had been handed down through the generations, and promised to share them. 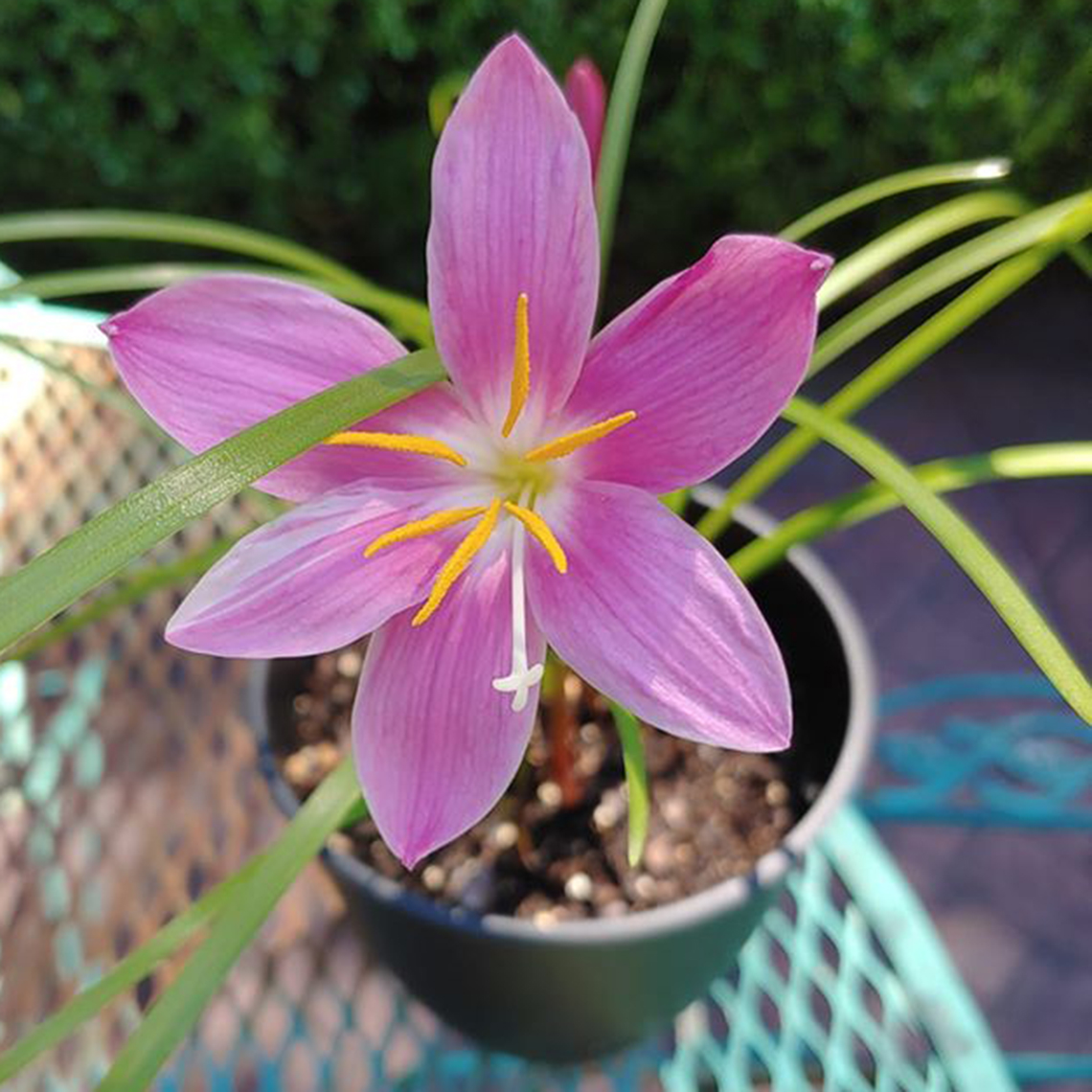 The following year, at Christmas, a padded envelope arrived with six tiny bulbs. “They are obviously easy to grow,” she said, “as they've lasted 60 years since her death, and they multiply like crazy. I know she will be smiling when your first bloom appears.”

I diligently potted and watered them, but each day I stared at nothing but dirt. So in the spring, I took them out in full sun. Soon, I was astonished to find a tangle of tall green shoots, and then big and infinitely cheery blooms. What a feeling!

From all of this has also come a strengthening of old bonds. Cousin Betty and I traveled to Massachusetts to visit my sister, Gale, who had lived with my grandparents for a time. They reminisced about their days on the farm, of swinging on long vines over deep ditches, of holding the cows’ tails to make them trot home faster when day was done, and how their little Methodist church tolled the bell for each year of life when a neighbor died.

It had long been my desire to attend a church service there, and last summer, Betty and I did just that, and then went to visit my mother's cousin Pauline, who was in a nursing home. The day before, we had breakfast with another cousin, Jerry, and his son Gary. And I delighted to meet with Bill and Melanie and their son Derrick, who treated me to a cheeseburger.

Debbie, who lives a nomad's life on a sailboat moored in Florida, also came to town, but I missed her by hours. No matter. We now have a powerful connection from new blooms of kinship.