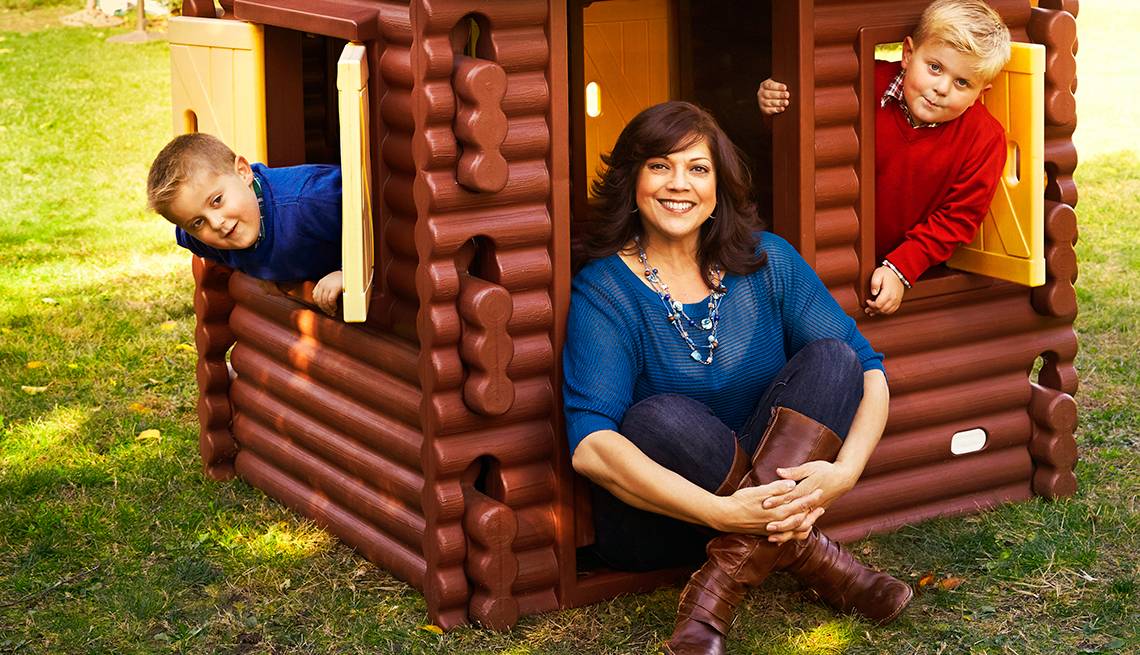 Sarajean Grainson, 59, became a mother again to give her second husband, a former priest, a profound gift of love.

En español | Sarajean Grainson discovered last summer that living in a Lutheran parsonage in Rockville Centre, N.Y., was a wonderful alternative to the colonial-style home that she had shared with her family for decades.

The move came as Sarajean, 59, and her second husband, pastor David Grainson, 46, were adjusting to adding three children to their brood after she turned 50. The Grainsons are the parents of 5-year-old twins, Matthew and David. They also have an 8-year-old son, Luke.

Sarajean has three children from a previous marriage. Becoming a mother again was all about giving her husband, a former Roman Catholic priest, a profound gift of love. "This is a good man," she said. "I wanted him to have the experience of parenthood more than anything. And I wanted to have a child with him."

She is part of a growing trend in America of women giving birth into their fifth decade.

In 2013, an average of 13 children were born every week to mothers 50 and older, most of whom used in vitro fertilization. "To be honest, David didn't want to take the risk — he was afraid for my health," said Grainson, who delivered babies at 51 and 53. "He married me [in 2001] thinking he would not have children. Then I saw a woman on television [discussing IVF]. I said, 'This is my last chance.' "

The notion of delivering babies after 50 is not as inconceivable as it once seemed. Rajo Devi gave birth at 70 to her first child in 2008 in India. She is the oldest woman recorded to give birth.

Births by women ages 50 to 54 rose by more than 165 percent from the year 2000 (255 births) to 2013 (677 births), according to the Centers for Disease Control and Prevention. The overall increase in fertility rates for women 35 and older during the last two decades is linked, in large degree, to IVF. The first child born through the fertility-enhanced method was in 1978 in England. Sure enough, from 2008 to 2012, the birth rate in England doubled for women 50 and older.

But social attitudes have been slow to catch up with medical advances. Last year, a survey of more than 2,000 U.K. citizens revealed that nearly 75 percent found it unacceptable for women beyond their natural child-bearing years to conceive with IVF. No similar survey has been taken in the U.S., but experts say clearly many disapprove.

Skeptics wonder about the life span of the new 50-ish mother, and they also fear parents might not "possess the requisite stamina," said Bonnie Steinbock, a bioethicist and professor emeritus at the University at Albany in New York. "They wonder how she will handle a recalcitrant toddler in the terrible twos," Steinbock said. "Will she be able to relate? Will the child feel embarrassed because the parents look like everyone else's grandparents?" Others believe it is "unnatural" to use IVF technology in older women, that science is usurping the natural order. 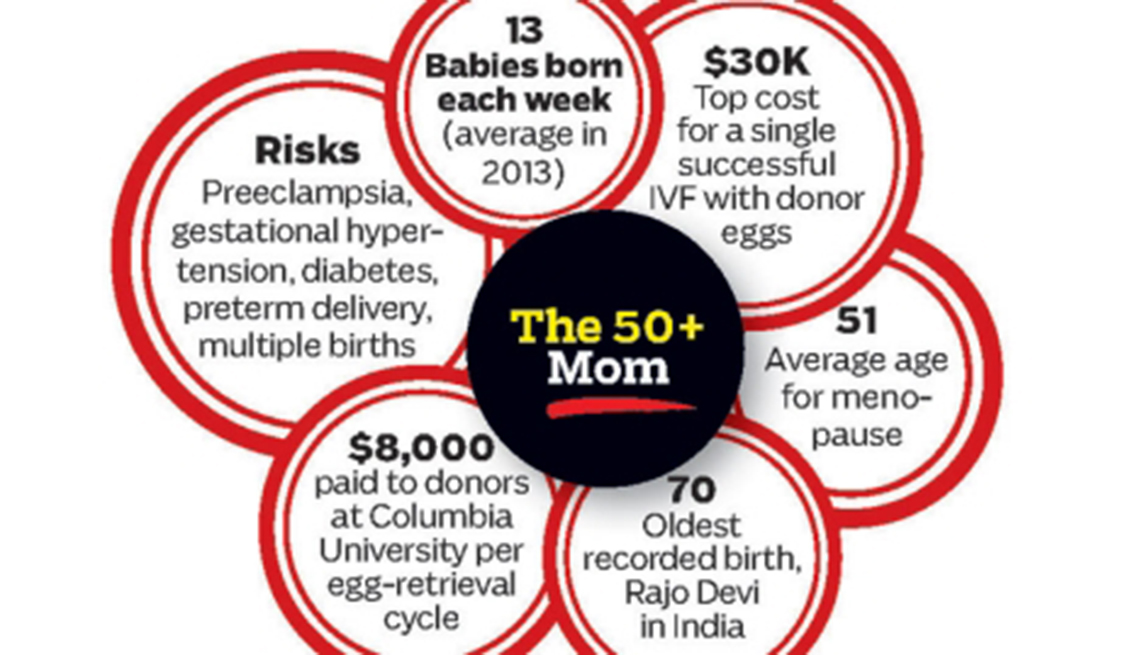 But for Steinbock, the strongest argument in favor of post-50 births is procreative liberty. "People should be able to make their own decisions," she said. "Others may not like it, but the argument is this: It is none of their business."

Others agree. "These are intelligent women — they are not silly, stupid or frivolous," said Mark Sauer, M.D., a pioneer since 1986 in using IVF with older women and vice chair of the Department of Obstetrics and Gynecology at Columbia University Medical Center in New York. "They seem to be healthy, and they understand there's a risk of death with having a baby."

Celebrities may help fuel the phenomenon: Actresses who have given birth near age 50 include Halle Berry, 47; Laura Linney, 49; and Kelly Preston, 48.

The majority of 50-plus women who became pregnant used donor eggs fertilized by sperm and implanted into a womb. The average age for menopause is 51. Fertility decreases through the 30s, ebbs much further in the 40s and is largely extinguished by 45, medical experts say.

Ideally, the important decision whether to attempt a high-risk pregnancy should be made after consultations with fertility specialists, and medical tests to ensure the safety of the prospective mother. "I would say that, of the [women] we see in their 50s, it is probably less than 10 percent that we deem too high a risk to treat" for fertility, Sauer said. "The most common reasons are high blood pressure and fibroid tumors in the uterus."

In 2012, the physician published a study that revealed the health of women 50 and older who gave birth using donated eggs was as good as for younger recipients — if they had been well-screened and cared for during and after delivery. Nonetheless, significant medical risks exist, including the increased possibility for gestational hypertension and diabetes, and preeclampsia — a pregnancy complication characterized by high blood pressure and possible organ damage. Stillbirth, preterm delivery, growth restriction and multiple births, sometimes a consequence of IVF treatments, are potential complications.

Any woman in her 50s considering pregnancy should consult with a maternal fetal medicine specialist and then speak with a reproductive endocrinologist, recommended Irina Burd, M.D., associate professor of gynecology and obstetrics and neurology at Johns Hopkins School of Medicine.

"They can spell out the risks that pregnancy poses to their health, [risks] that sometimes might be permanent," Burd said. "For example, there is a higher risk for having diabetes and hypertension for the rest of their lives."

While potential medical dangers lurk for mothers-to-be, risks to newborns — namely Down syndrome and other genetic abnormalities — are minimized because younger donor eggs are used. Younger women sometimes freeze embryos to use later. Multiple births are more common with IVF treatment because doctors sometimes recommend implanting up to four embryos in patients older than 40 to increase the probability of pregnancy.

The decision to give birth after 50 comes with a major financial commitment. It can cost as much as $25,000 to $30,000 with egg donation for a single successful IVF attempt. Insurance often does not cover the costs. Still, for some couples, the challenges are small weighed against the rewards. 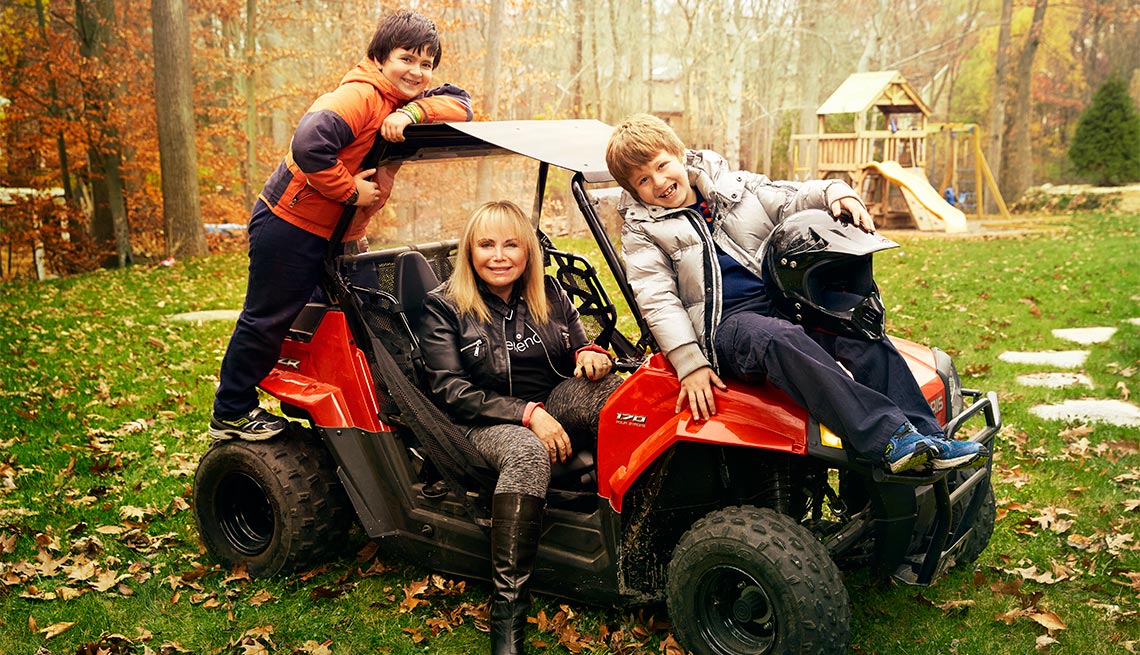 Turned down by U.S. clinics, Frieda Birnbaum and her husband traveled to South Africa for IVF treatments. At 60, she gave birth to twin boys.

Frieda and Ken Birnbaum of Saddle River, N.J., have five children. Frieda, a psychologist, and Ken, an attorney, celebrated the birth of son Ari when she was 53. But at 60, at her husband's urging, she delivered twin boys, Josh and Jaret, by C-section.

The New Jersey couple traveled to South Africa for IVF treatments, where the youngish-looking blonde lied about her age. She had been turned down at U.S. clinics with cut-off limits at age 50.

The births generated international media attention. "I had a reporter from Germany come to my front door and say, 'I want to see the old lady,' " Frieda Birnbaum said. "They thought that at 60 I was supposed to be some shriveled up, gray-haired woman."

Elizabeth Gregory, author of Ready: Why Women Are Embracing the New Later Motherhood and director of the Women's, Gender & Sexuality Studies Program at the University of Houston, said women who become pregnant later in life are optimistic sorts who have maintained their bodies and minds.

"These people are compelled; they have a strong energy about them," said Gregory, who adopted at age 48. "Having a child keeps you fit."

Some older mothers are first-time moms. They concentrated on their careers or forged new partnerships. Some remain single; others are same-sex couples. They share a common desire to be biological mothers, not adoptive parents, after 50.

But other couples start a new family after raising children to adulthood. Some older couples do not want to be empty-nesters, Sauer said. In essence, they want to be perpetual parents.

Not every older mother wants to talk about the experience. "People are so judgmental," said New York-based social psychologist Susan Newman. "Many look at older mothers and say, 'Why is she doing this now? She is too old — old enough to be a grandmother.' "

Cyma Shapiro, creator of motheringinthemiddle.com, a blog for new midlife parents, said many older mothers have good reasons not to go public. "I interviewed women across the country and they were very clear with me — any discussion about their [specific] age would have a ramification either with their employer or with friends and relatives," she said. "Ten years from now, there will be no shame in any of this for most women."

The Grainsons are certain they made the right decision, despite the daily fatigue of parenthood. Sarajean said, "I don't think it was harder because I was older; I think it was harder because I forgot what it was like. The amount of laundry is ridiculous." Still, she says she has no regrets. "I would do it all over again. Technology and God will take you out of menopause."

Jon Saraceno is a freelance writer living in Virginia