When you're a kid, you don't realize there's a big John Wayne banner following you around. You're surprised that people remember you and you don't remember them. Later on, you realize, Oh, it's not me. It's him! Daddy Duke with Ethan on a Mexico movie set, 1965.

I loved everything I did with my dad. He carried these autograph cards, and as a little kid, it was my job to have them ready if we were out in public and he was trying to get through a crowd. If he put his hand out, like a surgeon waiting for a scalpel, I'd better have that stack ready or he'd get pissed off.

I guess in some ways I still work for my dad. I head John Wayne Enterprises, which licenses products bearing John Wayne's name — from tchotchkes to bourbon. And a portion of the proceeds from each sale goes to the John Wayne Cancer Foundation, which sponsors cancer research and outreach programs for cancer patients and their families.

My dad was affectionate at home. I'd run and I'd jump, and he'd pick me up and twirl me around. A big bear hug. He'd always give you a hug or a kiss on the head. Tell you he loved you. But on the set, with all his old buddies, it was different. If you happened to be standing in his path on the set, he'd knock you out of the way — just walk right through you. Or if you were standing in the wrong place, he might just chuck an orange and hit you in the back of the head. It wasn't mean, but it was almost mean.

I came along when he was 56. I recently read that someone asked my father why he took me out of school to travel with him. He answered, "Boys go away when they get to be 16 or 17, and they don't come back until they're in their 30s. I won't be there for Ethan when he's in his 30s, so I'm gonna love him now."

I was 5 or 6, playing with a little girl one day, when I stepped on her head. On purpose. I was kind of a tomboy, and my dad liked that. But she went screaming to my dad, who was inside with some grownups. I followed her in, and my dad, who was large and loud, demanded, "Did you step on her head?" I hesitated, and then he said, much more quietly, "Come here. If you lie to me, you're gonna disappoint me and you're gonna go to your room and you're gonna be punished. If you tell the truth, well, you're still gonna be punished, but I'm not gonna be disappointed in you."

I told the truth. And then it was over. He never rehashed it. That's the kind of father he was. 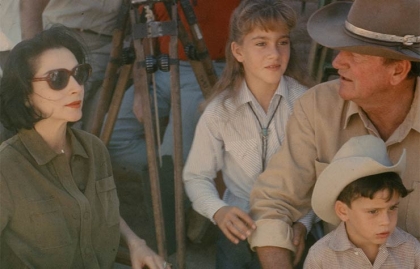 John Wayne on set with wife Pilar, Aissa and Ethan, 1966.

My dad valued hard work. He made sure we had chores. I was 4 when my parents divorced. We four kids lived with our mom, his first wife, but we called our father every night. He kept up with our grades and impressed upon us our responsibility to be good citizens. And we visited him on his movie sets wherever he went.

When he filmed The Quiet Man in Ireland in 1951, he had a big house there, so we kids would come stay with him. There were still just four of us, though he eventually had three more kids with his third wife.

As we got off the plane in Shannon, he said, "I know you're going to want to buy gifts and take stuff home, but you've got to earn the money." So at 10 years old, I was thinking, "Oh, my God, I've got to get a job!"

The next morning, at 6 a.m., I walked a mile or so to the town and got a man to hire me to sweep.

When I got back to the house, everyone was in a panic. They said, "We thought you were kidnapped!" My dad was sitting at the dining room table, very calm, and he said, "Nice of you to show up for breakfast. Where have you been?"

But I always found ways to work. A few years later, when I was 14, I walked over to Ohrbach's department store and got a job.

He would be embarrassed by John Wayne Airport in Santa Ana, California, and by the big statue they have of him up there. He didn't want to be president or have things named after him. He knew he had to be famous because that's how you got your movies made. But he was actually very humble.

When he was dying, he turned to my late brother, Michael, and said, "Whatever you do, use my name for the benefit of the public. If it weren't for the public, I wouldn't be here, you wouldn't be here. We wouldn't have had the life we had."

And that was the beginning of the John Wayne Cancer Foundation. John Wayne with his daughter, Marisa Wayne, at a charity ball game in 1977.

One day when I was about 9, Dad said to me, "Let's go play some golf." I figured, well, how hard can it be? So we went out to a driving range, and I'm swinging and swinging and missing the ball. He came around and said, "Honey, just watch the ball and make contact." I swung the club and the ball was still there — but I could tell I made contact with something.

I turned around and saw my father staggering around. Blood was coming out of the side of his head. And down he went. Whump! A couple of men got an ambulance.

When he came to in the hospital, he asked for me. All I could think was, I am in so much trouble! I can still feel it right now, the knot in my stomach. I went in there, and all he said was, "Well, you're the only one who had the nerve to do this to me!"

I'd hit him near the eye. If I'd hit him in the temple, they said, I would probably have killed him. He was filming Rooster Cogburn with Katharine Hepburn at the time, and luckily I hit him in the eye that had the patch. If you watch the movie, you may notice that the patch gets a bit bigger.

Until that day, he'd always called me Princess. After that, I was Nine Iron. As in "Nine Iron, clean up your room!"

We each felt like we were his favorite. On Christmas Eve he'd take me to the room where the wrapped presents were and let me open a few. He'd say, "I got you so many, it's not fair to the other kids."

But I have a feeling he did the same thing with them.

As told to Bill Newcott