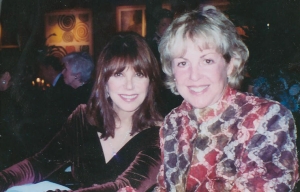 Marlo Thomas and her "best friend for life, Camille."

Nobody likes an exaggerator, especially when the plaudits sound fishy. But when you reach a certain age, you gain some credibility that allows you a kind of absolutism, at least in matters of the heart. As the page turns on another calendar, I find myself recalling the people and incidents that made me laugh, made me proud, made me cringe — and helped to shape my understanding of the things I value. It's a fun exercise for anyone, because it reminds us of what we've learned.

Best performance by an angry dad

As a teen, I usually adhered to my midnight curfew. But one night my beau Johnnie and I rolled up to my house at 12:15. Dad was standing on the lawn holding a shotgun. Johnnie apologized and sped off. I was mortified and told Dad, who burst out laughing. "But it was funny, right?" he said. Lesson learned: He who gets the last laugh … wins.

I was a struggling actress, and the producer of TV's Bonanza wanted to cast me as a mail-order bride. "One thing," he said. "Can you speak with a Chinese accent?" "Of course I can," I fudged. I had to ask a waitress at a Chinese restaurant to coach me. (In the end, they couldn't get me to look Asian, so they made me half-Persian instead.)

I got to witness Uta Hagen play Martha in Who's Afraid of Virginia Woolf? What she brought to the character was amazing — anger, competitiveness, sensuality, vulnerability. That show taught me more about acting than any class ever could.

My Jewish boyfriend Lenny took me to Brooklyn for Passover dinner. I loved seders — except for the gefilte fish. But I dutifully downed the dreaded dish and started feeling queasy. Then someone mentioned I was Catholic, which sent Lenny's mom sprinting to another room, upset. On the drive home I lost the fish in the car! Nice celebration!

Lenny was a TV producer, and eventually he helped turn that catastrophic date into a sitcom called Bridget Loves Bernie, about a Catholic-Jewish couple. Another lesson: You can make practically anything funny.

I had vowed never to wed, but now I was on a plane to Greece for my honeymoon. Phil left his seat, and a woman across the aisle recognized me — then saw the ring on my finger. "Why would you get married?" she scowled. "I am so disappointed!" I was horrified until Phil returned. Then I realized that being consistent is less important than being happy.

The day my father died, our house was mobbed by well-wishers and I was in a sad, foggy daze — but there was my cherished Camille, passing food, making drinks, lending support and normalcy to an otherworldly tableau. That is the definition of friendship.

That's my list. Try to come up with your own [share it in the comments below]. You'll be amazed at the memories you stir up. Which reminds me — I have one more:

My mother's marinara. And that is not an exaggeration!