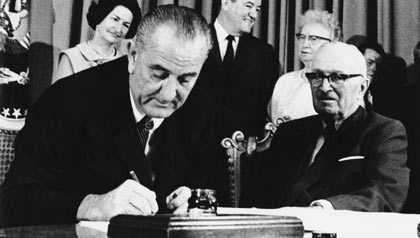 July 30, 1965: With former President Harry S. Truman at his side, President Lyndon B. Johnson signs the Medicare bill into law.

You've Earned a Say about Medicare: Speak up now!

Moments later, the 36th president of the United States presented America's 33rd president, Harry S. Truman — then 81 years old and praised by LBJ as "the real daddy of Medicare" — the nation's first Medicare card. (See archival footage from the event in the "Video Extra" section at the bottom of this page.)

Medicare provides health insurance to Americans age 65 and older and to younger people with certain disabilities or health conditions.

At its creation, Medicare consisted of two parts: Medicare Part A hospital insurance coverage, which is financed by payroll deductions and charges no premiums to those who have contributed; and Medicare Part B, an optional medical insurance program for which enrollees pay a monthly premium.

Medicare's first beneficiaries paid a $40 annual deductible for Part A. The monthly premium for Part B — in which Truman did enroll — was $3. Today those Medicare costs are $1,184 for the annual Part A deductible and a premium of roughly $105 a month for Part B, plus a $147 annual deductible.

Prior to Medicare, those over 65 without access to an employer's health plan or a private insurance plan were on their own, or dependent upon their families, when they required medical care. Efforts to create such a health safety net program were years in the making.

Here is a time line of several Medicare and insurance-related milestones:

1945: President Truman calls for a national health insurance program for all. Legislators on Capitol Hill don't act. He asks again in 1947 and 1949. Bills are introduced but die in Congress.

1961: A task force convened by President John F. Kennedy recommends creating a national health insurance program specifically for those over 65. In May 1962 Kennedy gives a televised speech about the need for Medicare.

1965: Legislation creating Medicare as well as Medicaid (health care services for certain low-income people and others) passes both houses of Congress by a vote of 70-24 in the Senate and 307-116 in the House. President Johnson signs the Medicare bill into law on July 30 as part of the Social Security Amendments of 1965.

1966: When Medicare services actually begin on July 1, more than 19 million Americans age 65 and older enroll in the program.

Today, nearly 50 million Americans — 15 percent of the nation's population — depend on Medicare for their health insurance coverage. With increasing life expectancies and more boomers turning 65 every day, the number of people in Medicare is expected to double between the years 2000 and 2030.

Melissa Stanton is an editor at AARP.org.