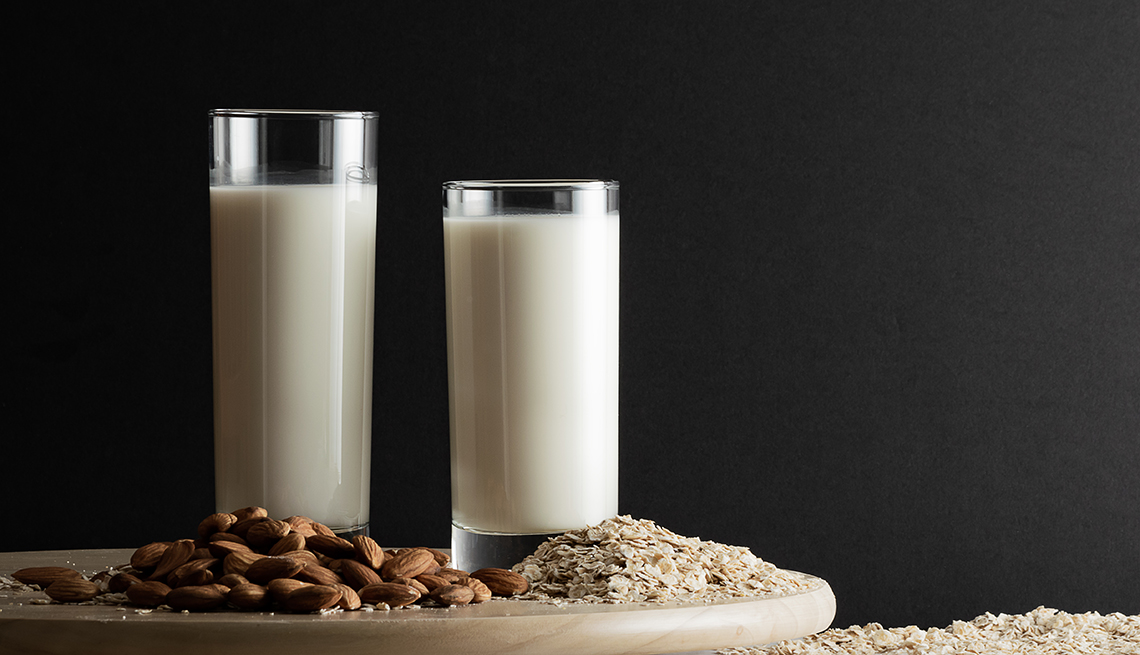 Plant-based milks are a growing alternative to dairy options, with varieties expanding beyond the most popular, almond milk.

Nondairy milks are attractive to those who are lactose intolerant (a condition that affects people as they age) or allergic to the typical dairy offerings, as well as to vegans, who eschew all dairy products.

Many people become lactose intolerant as they get older because the enzyme lactase, which converts milk into milk sugar, diminishes. This tends to send milk drinkers looking for an alternative that won't cause gas, bloating, indigestion or other gastric problems, says Robyn Goldberg, a registered dietitian nutritionist based in Los Angeles and author of The Eating Disorder Trap.

And though almond milk was the first alternative to gain popularity, thanks to a large marketing push by suppliers, oat milk — only introduced in the United States in 2018 — is cutting into its business, experiencing the greatest sales increase, compared with competitors, in the past year, says Tabitha Sewell, category manager of dairy, nondairy and refrigerated beverages at KeHE, a grocery distributor.

How Oat Milk and Almond Milk Are Made

Oat milk is made by soaking rolled oats in water, blending the mixture at a high speed and then putting the milk through a strainer. Flavoring, such as vanilla extract, cocoa or cacao powder, or berries can be added to change its taste, and oil is often added as a fat element.

Oatly!, one of the top-selling oat milk brands, says that it adds an ingredient called dipotassium phosphate, an acidity regulator to keep the milk from separating when heated.

Almond milk is made in a similar way: soaking, blending, straining and adding extra flavors. You can also turn almond butter into almond milk just by adding water. A caution for the environmentally conscious: Compared with oat milk, almonds require much more water to grow, which puts a strain on natural resources.

In 2019, “Other and Blends,” a milk distribution category, neared $400 million in sales and 54 percent growth, with oat milk making up the majority of those sales, Sewell says.

Although the number of alternatives on the market may seem unlimited (coconut, soy, rice, hemp, among them), dairy milk still reigns supreme, with $16 billion in sales. Altogether, other alternatives sold under $5 billion. But sales of dairy milk are forecast to drop by some $3 billion by 2025 as more people choose other options, according to Sewell. “Almond will continue to be a huge segment of the category, but oat is quickly becoming the second-largest base type in the U.S.” Almond did $1.3 billion in sales, making up 61 percent of the alternative-milk market.

We asked the experts to break down the nutritional benefits of popular alternatives.

Although both oat and almond milks are lactose-free, almond is a good option for people with diabetes or those looking to cut carbs from their diet.

"If you are trying to minimize your carbohydrate intake or you're wanting to look for a lower-carbohydrate alternative to a regular milk, almond milk can be a great option for that,” says Laura Yudys, clinical nutrition manager at Northwestern Medicine Central DuPage Hospital in Winfield, Illinois. “But just make sure that you choose those unsweetened versions, versus the flavored or sweetened varieties."

Also, almond milk contains carrageenan, which serves as a thickener and can cause gastrointestinal challenges for those with a sensitive stomach, Goldberg says.

The oat alternative, favored by people who seek a stronger, creamy flavor that resembles dairy milk, is also the least allergenic on the market. But oat milk tends to have more calories and fat than almond. It also has about one gram more of fiber and protein per 8-ounce serving.

Both kinds are fortified with calcium and vitamins A, D and B12, as are most plant-based milks.

To meet your nutritional needs, Goldberg suggests consuming dairy milk or a lactose-free milk if you are intolerant to the enzyme.

"It is an essential source of protein, calories and fat. Soy milk is the only other one that's comparable in regards to protein,” Goldberg explains. “It does have an allergen component. It just depends on what the person's circumstances are."

The variety of dairy milk you choose — skim, 1 percent, 2 percent or whole — should be based on your personal needs.

"I think it's relative if they have high cholesterol and/or coronary artery disease,” Goldberg says, “because of the saturated fat that is in it. But, again, sometimes an individual feels like, Well, I'll put it in my coffee, or I'm having it in my cereal — I'm not actually having a glass of milk, so to feel fuller longer, they would perhaps want a higher-fat milk."

A new study reignites the debate over dairy

Is It Time for a 'Liquid Diet'?