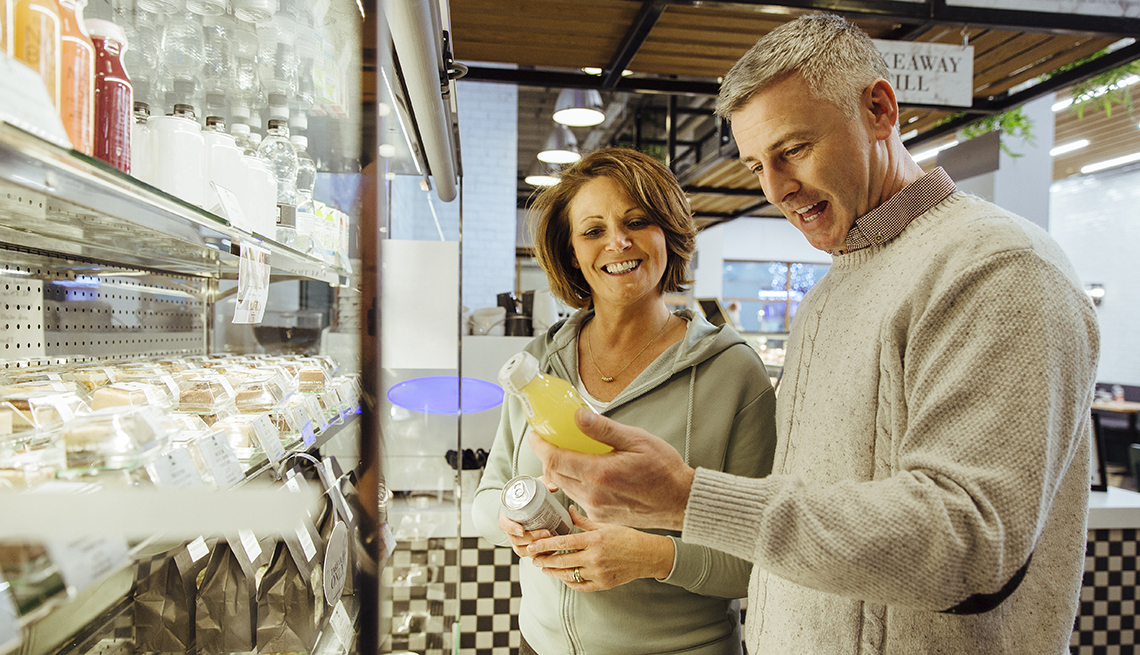 If you're looking to improve your diet, don't dismiss drinks. Beverages account for nearly 20 percent of the calories American adults take in, according to federal research. They also contribute more added sugar to the American diet than any other category of food, according to the Centers for Disease Control and Prevention. Unfortunately, many are misled about what drinks are actually good for them. Here's what you need to know about five frequently sipped beverages.

A glass of orange juice on your breakfast table may look like a part of a wholesome breakfast. But an 8-ounce glass provides around 100 calories and 24 grams of carbohydrates, roughly the same amount in an 8-ounce serving of Coca-Cola. Sure, they're not exactly the same — juice contains some valuable vitamins and antioxidants that soda does not. But both can send your blood sugar levels soaring, particularly if not balanced out with lower-carb, higher-protein foods.

What's more, energy needs tend to decrease as we age. Juice packs a lot of calories into a small — and often very quickly consumed — serving. Your best bet? “Eat the fruit, don't drink the juice,” says Cary Kreutzer, a registered dietitian and associate clinical professor at the University of Southern California Leonard Davis School of Gerontology and Keck School of Medicine. Whole fruits like oranges, apples and berries also contain fiber, a satisfying nutrient that helps minimize a food's impact on blood sugar.

The flip side: Juices may come in handy for specific issues. Prune juice, for instance, can help relieve constipation, says Kreutzer. If you have diabetes, a small glass of juice can help bring low blood sugar back into range. If it makes sense for you to keep juice on hand, look for 100 percent fruit juices, since they won't have any added sugar.

A smoothie can be a tempting between-meal pick-me-up, one often marketed as an “all-natural” alternative to less nutritious snacks. And though smoothies are often made with whole fruit, which means they contain the valuable fiber missing from juices, they aren't an entirely smart sip. “The blending process is predigesting these fruits and ingredients in the smoothie,” Kreutzer says. And that means you won't feel as full after drinking them. Research has shown that those who eat a meal of solid food feel more satisfied than those who eat the same things in blended form.

What's more, it's easy to take in more calories through that smoothie straw than you'd expect; a medium (22-ounce) acai super-antioxidant smoothie from one popular juice chain, for instance, contains 440 calories — a huge dent in most adults’ daily needs. “If you're having them as a snack, you're likely going to gain weight,” Kreutzer says.

The flip side: If you have trouble chewing or eating enough, smoothies can be an easy way to boost your caloric intake. Just be aware of the ingredients in any smoothie you order — some are mainly sherbet and juice. Instead, look for drinks that include the same things you'd want in a balanced meal: protein (like yogurt, cow's milk or soy milk, peanut butter), healthy fat (like avocado, seeds, nuts) and a vegetable (like spinach, kale or pumpkin).

It's certainly not a bad thing if you've sworn off regular sodas; researchers link drinking them regularly with increased risk of Type 2 diabetes, heart disease, gout, weight gain and more. That doesn't mean, however, that diet sodas are a risk-free replacement. Women age 50 and older who drank two or more of such artificially sweetened beverages per day had a 23 percent greater risk of having a stroke and were 16 percent more likely to die from any cause compared with other women, according to a 2019 study published in the journal Stroke. Other research has linked drinking diet soda with weight gain, particularly around the abdomen, which could further increase the risk for heart disease.

"If you're swapping soda for diet soda, you're still perpetuating that sweet tooth,” says Kreutzer. If you've made the swap to diet, try taking it a step further: Unsweetened, flavored seltzers can tickle your taste buds in the same way as diet soda, without anything artificial.

The flip side: Diet sodas can be helpful for weaning yourself off regular sodas, or as an occasional treat if you have diabetes.

For most adults, water is the best fluid replenisher. Sports drinks are designed to replace electrolyte minerals and carbohydrates that the body uses and sweats out during vigorous exercise. But the reality is, most adults don't exercise to the level that would require the benefits of a sports drink; rather, sports drinks just provide them with more sugar and calories than their bodies need. For most, it's probably best to cut down on intake. To do so gradually, dilute a sports drink with more and more water over time, Kreutzer recommends.

The flip side: You do need a sports drink if you choose a high-intensity activity for longer than 45 to 60 minutes, according to the American Council on Exercise. Another exception: if you sweat profusely, and lose a lot of sodium in the process (you will see salt stains on your clothes). Talk to your doctor if you're not sure.

The typical recommended limits on alcohol — up to one drink per day for women, up to two per day for men — don't officially go down as you get older. But the body's ability to metabolize alcohol can change, which means you may feel more intoxicated or “off” after drinking the same amount. Another important consideration is interaction with any medications you may be taking. “People need to ask their doctor and pharmacist if it's OK to be consuming alcohol along with their medications,” says Kreutzer. Be sure to mention both prescription and over-the-counter drugs.

The flip side: Some studies have linked alcohol consumption with decreased rates of death from heart disease. That said, drinking beyond that one to two beverages per day is never beneficial. And eating a heart-healthy diet every day — fruits and vegetables, whole grains, nuts and beans along with lean protein — is a better bet for keeping that ticker in tip-top shape.