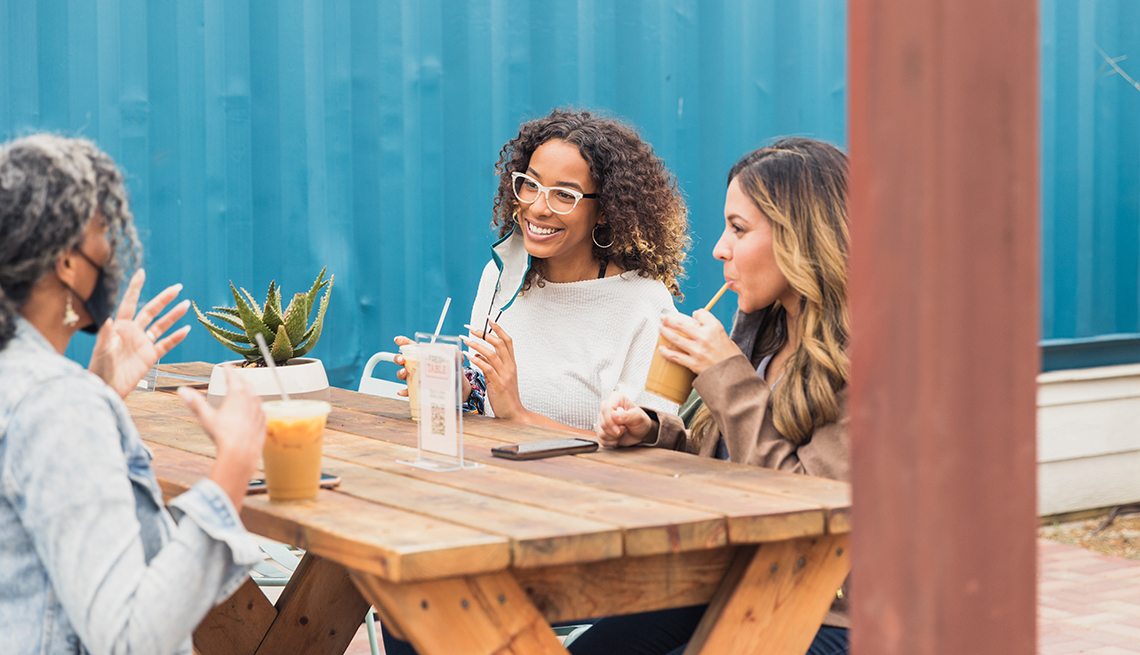 When the coronavirus first put the brakes on life as we know it, the behavior guidelines were fairly straightforward. For instance, don't gather in large groups, and when you do venture out, wear a mask. Now many of us are fully vaccinated and eager to get together with family members and friends, while others are waiting (and waiting) to get an appointment for a shot.

Such differences in vaccine status are giving rise to some tricky etiquette questions surrounding everything from party planning to potentially polarizing conversations over who got their vaccine when, and how.

We turned to the experts — a professor of bioethics, professional manners consultants and a syndicated advice columnist — to help make sense of it all.

1. You're dying to let someone you perceive as a vaccine line cutter know that you are not okay with what you see as her “me first” behavior. What's a little honesty between friends?

In this case, a little honesty may not actually be the best policy. “Stay in your lane,” advises Lisa Grotts, an etiquette expert known as the “Golden Rules Gal.” Most of the experts we talked to agree with Grotts that the best approach is to steer clear of this kind of confrontation. Amy Dickinson, who writes the syndicated advice column “Ask Amy,” says her approach to COVID-related topics is different than the often frank advice she offers in other areas. “I have turned the corner and have finally adopted a ‘live and let live’ attitude,” she says. “I have been very fortunate. I have been able to live what I would consider a normal life. Because I live in a rural area, I'm outside a lot. I am able to enjoy nature and see other people outside. I still have my job. But I have family members and close friends who have had radically different experiences with the pandemic — and radically different attitudes about the pandemic. And I respect that."

Besides, notes Jodi RR Smith, president and owner of Boston-based Mannersmith Etiquette Consulting, “There are a lot of people with medical issues — maybe a temporary illness or a long-term situation that's not easily visible — and they don't necessarily want others to know what their situation is.” So it's possible that questioning someone about their vaccine eligibility could bring up private health issues they'd rather not discuss.

2. Now that you've been fully vaccinated, you're ready to start getting together with friends and family. How do you handle socializing when not everyone has gotten the vaccine?

It is up to the host to establish guidelines, says Syndi Seid, owner of San Francisco area-based Advanced Etiquette. “I personally would require everyone to be vaccinated to ease the minds of all of my guests,” she says. One caveat? Doing so can be acceptable in a small group of friends, while asking people you don't know well about their vaccination status — or questioning coworkers, for example — can seem invasive. Same goes for seeking information on who's had COVID itself.

What if you're the guest considering an invite when no such information has been included? “It's fine for a guest to ask if everyone has been vaccinated. Then it's up to the guest to accept or decline the invitation.”

Keep in mind, says Smith, that without any information to the contrary, you should proceed as if people have not had the vaccine or have had the vaccine but might still be contagious. “In my book club, there are seven people, and three have been vaccinated — but all seven of us are still going to wear masks,” says Smith, who adds that until everyone is fully vaccinated, she'll be providing very clear “preemptive” guidelines to guests before any get-together. “As the host, I'll say, ‘Rain or shine, we're having a book club in my backyard. If it's raining, we'll be on my deck, underneath the awning, so please dress appropriately. Everyone needs to bring and wear a mask. I will be providing refreshments. I do ask that you try not to sip at the same time as other people, so only one person has their mask off at a time. Normally, I'd be giving everyone a big hug, but no touching until everyone is fully vaccinated.'"

3. Your brother is vocal in his anti-vaccination opinion, and you're concerned for his health and safety. What can you do to change his mind?

Not a lot, says Dickinson. “I've been writing an advice column for 18 years, and one thing I know is that you can't control other people — you can only control yourself.” In this case, that means you can only get a vaccine for yourself, and you can't make anyone else do so. Ultimately, notes Grotts, “the burden is on the people who haven't been vaccinated."

But you can also control whether or not you interact with someone who declines the vaccine. As Smith says, “If this person is making it perfectly clear that they do not plan on getting a vaccination, that, right now, is their prerogative. But I also don't need to spend time with them. Or I can spend time with them outside, and say, ‘I understand that you don't believe in COVID, but I do. So if you do come over, I'm going to ask that you humor me and wear a mask.’ “

The bottom line, says Dickinson, is that some tolerance may be in order. “I personally feel that anybody else's vaccination status is their own business. In right-minded people — good, kind people — the pandemic has brought out a side that is judgmental and punishing.” As she sees it, you aren't responsible for “getting someone killed” by minding your own business.

4. A family member has just gotten her second vaccine — good for her. But posting a photo of herself getting that second jab seems kind of braggy when others are still waiting … right?

"At the beginning of the process, there was a lot of misinformation and mistrust about vaccines,” Smith says. “It was important, as a part of a public health campaign, to have everyone who was part of those initial waves of vaccination make it public. Any time we saw those in the medical profession get the vaccine, that was a signal the vaccine was something we should take seriously and get the second we had the option to.”

But, notes Smith, we're a bit further on now, and if you're the one ready to share the news of your second shot, it pays to be sensitive. “There are a lot of people who are still waiting to get vaccinated. I would caution people to think twice before posting on social media. You want to think: Have most of my friends been vaccinated? Or are they setting their alarms for 2 a.m. in order to get on a website and land an appointment?"

5. An acquaintance casually revealed that she got a vaccine for her 16-year-old son. As a 50-year-old who is still waiting to get an appointment in be vaccinated, you feel miffed. Are your feelings unreasonable or just plain petty?

It depends. “It seems obvious that if someone is literally cutting in line — meaning they're not in the group that is eligible to be vaccinated — that's wrong,” says Matthew Wynia, M.D., a professor of medicine and director of the Center for Bioethics and Humanities, University of Colorado Health Sciences Center. “It's not acceptable if you're lying on the form and saying, ‘I'm 65,’ when in fact you're 45.”

"The challenge we have is that the categories are often kind of fuzzy, so there are ways that someone can qualify that might be shading the truth a bit, though they're not exactly lying. It's harder to criticize someone for taking advantage of a loophole, for example.” In a perfectly fair system, Wynia says, we'd rank everyone according to their level of personal risk of death and serious illness as well as their likelihood of passing on the virus, then proceed accordingly. “But that's obviously not practical, so we end up making categories — and there's going to be some fuzziness.” As much as possible, try to accept that gray areas exist and that it's not up to you to fix how others might perceive or act within them.

The Ins and Outs of Mask Etiquette

What to say in awkward situations — at get-togethers, in public or at work

Most states have dropped COVID-related restrictions