En español | For women who sometimes have a glass of wine at the end of a busy day, the recent study linking even low alcohol intake with an increased risk of breast cancer was bad news indeed.

Even more troubling was the over-simplified way the study was explained in various news reports, making some women think that just having a mojito with the girls could give them cancer. 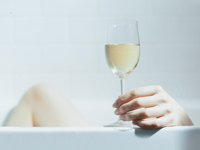 Women with other breast cancer risk factors may decide it's prudent to stop having that relaxing glass of wine.

New York University cardiologist Nieca Goldberg, who hosts a weekly "ask the doctor" call-in show on SiriusXM Radio, says she got calls from worried women asking, "What's going to happen to me? Am I going to get breast cancer?"

"But you can't just go by a headline. This needs to be put into perspective," she says.

The study looked at the cumulative effect of low to moderate alcohol consumption among more than 100,000 women, ages 30 to 55.

Although previous studies had shown a link between alcohol consumption and breast cancer risk, the emphasis had been on binge or heavy drinking. This study, published this month in the Journal of the American Medical Association, looked at the cumulative effect over a woman's lifetime of drinking low to moderate amounts of alcohol.

The researchers found that those who drank as few as three to six alcoholic drinks a week during those years had a 15 percent increased risk of breast cancer, compared with those who didn't drink. Women who regularly drank two or more drinks a day had a 51 percent higher risk than women who never drank.

The average woman's risk of getting breast cancer in her lifetime is one in eight, or 12 percent. A 15 percent increase over that means her lifetime risk rises to 13.8 percent.

Even the study's authors point out in their conclusion: "We did find increased risk at low levels of [alcohol consumption], but the risk was quite small."

In an editorial accompanying the study, Steven A. Narod, M.D., director of familial breast cancer research at the Women's College Research Institute in Toronto, further clarified the findings by explaining that, women who drank two or more drinks a day saw their 10-year risk increase from 2.8 percent to 4.1 percent.

Given that these are fairly small increases, Narod thinks it raises the question: "Should postmenopausal women stop drinking to reduce their risk of breast cancer?"

Some women, especially those with other risk factors like a family history of breast cancer or a genetic marker like the BRCA gene, may decide it's prudent to stop drinking.

For a woman without high risk factors, "if she is a moderate drinker, I don't think she needs to stop," he told the Bulletin.

Next: A moderate amount of alcohol benefits the heart. >>

As a cardiologist — and a spokesperson for the American Heart Association — Goldberg sees things a little differently.

A moderate amount of alcohol — no more than a drink a day — can have cardiovascular benefits for the heart. And heart disease kills many more women than breast cancer.

Among women, one in 30 deaths is from breast cancer, while one in three is from heart disease, according to the American Heart Association. Government data show that each year about 88,000 women ages 45 to 64 have a heart attack, and half of them will die within eight years.

Goldberg urges women to discuss their personal risk factors, for both heart disease and breast cancer, with their doctor. "We're not going to write a prescription for people to start drinking. Just having a drink a day is not going to reduce the risk of heart attack — it's a multi-risk factor disease, just like breast cancer," she says.

Also, women should consider the other things they can do to reduce their risk factors, "like physical activity — that's good for both breast cancer and heart-disease prevention — and stopping smoking and getting your cholesterol in check," Goldberg says.

Do all that and maybe you can celebrate with a nice glass of chardonnay.

Also of interest: How to customize your mammogram. >>