En español | The food pyramid is ancient history. Meet "My Plate," the federal government's new symbol of healthful eating, designed to show that nutrition should be simple and easy to understand.

My Plate is a circle with four colorful sections devoted to fruits, vegetables, grains and protein, with fruits, vegetables and grains making up three-fourths of the plate and protein limited to a smaller wedge. A small circle next to the plate represents a modest serving of dairy — meaning low-fat milk or a cup of yogurt. 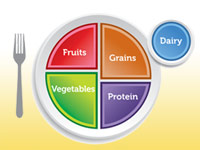 "My Plate" is the government's new icon of healthful eating.

As part of its $2 million campaign, the U.S. Department of Agriculture unveiled the logo today in a Washington news conference, calling it "a clear and unmistakable message about what should be on the American plate," as Secretary of Agriculture Tom Vilsack put it.

First lady Michelle Obama, whose task force on childhood obesity was also involved in planning the new symbol, explained its design this way: "What's more simple than a plate?"

Mrs. Obama believes Americans of all ages can understand and benefit from the My Plate message of half-a-plate of fruits and vegetables alongside a small portion of lean protein. "It can be reinforced at breakfast, lunch and dinner no matter how old we are," she said.

The plate reflects the government's new emphasis on combating obesity and diabetes by encouraging Americans to switch to a diet that's heavy on fruits and vegetables and light on meat.

Alice Lichtenstein, a professor of nutrition science and policy at Tufts University, called the new plate symbol easier for older adults to understand and apply to their own dietary habits.

"I think it conveys more information than the pyramid," she says. " I hope [older Americans] will take it to heart because I think it will make a difference in their quality of life and in keeping them feeling good."

Next: New plate icon designed with over-50 set in mind. >>

She acknowledges that some people might need a little more detailed nutritional information about the image. "For older adults, showing the circle labeled dairy next to the plate might suggest only a glass of milk, when it's important for them to know that cheese and yogurt are also in the dairy category."

The plate replaces the controversial 2005 MyPyramid, which nutrition experts had derided as vague, confusing and heavily influenced by food industry lobbying. Unlike previous pyramids, which at least had images of food, the 2005 version used colored vertical strips that were supposed to represent the various food groups.

Marion Nestle, a professor of nutrition at New York University whose book Food Politics: How the Food Industry Influences Nutrition and Health chronicled the intense lobbying effort behind the food pyramid, called the 2005 symbol "foodless and useless."

She had kinder words, however, for the new plate-shaped icon, which she praised for its clarity.

"I see a few signs of throwing bones to food companies, but the emphasis on fruits and vegetables is unambiguous," she told the Bulletin.

While the past food pyramids seemed designed for younger eaters, Nestle thinks the new plate "is fine for the over-50 set."

"One of the great things about it is that it is consistent with recommendations for prevention of diabetes, cancer and heart disease. One unified symbol seems like a great idea," she says.

In the coming year, the government will push its message that Americans need to eat smaller portions, switch to low-fat or fat-free milk, and drink water instead of sugary drinks.

Here are some other good dietary tips for older adults from Lichtenstein and the government's new dietary guidelines: