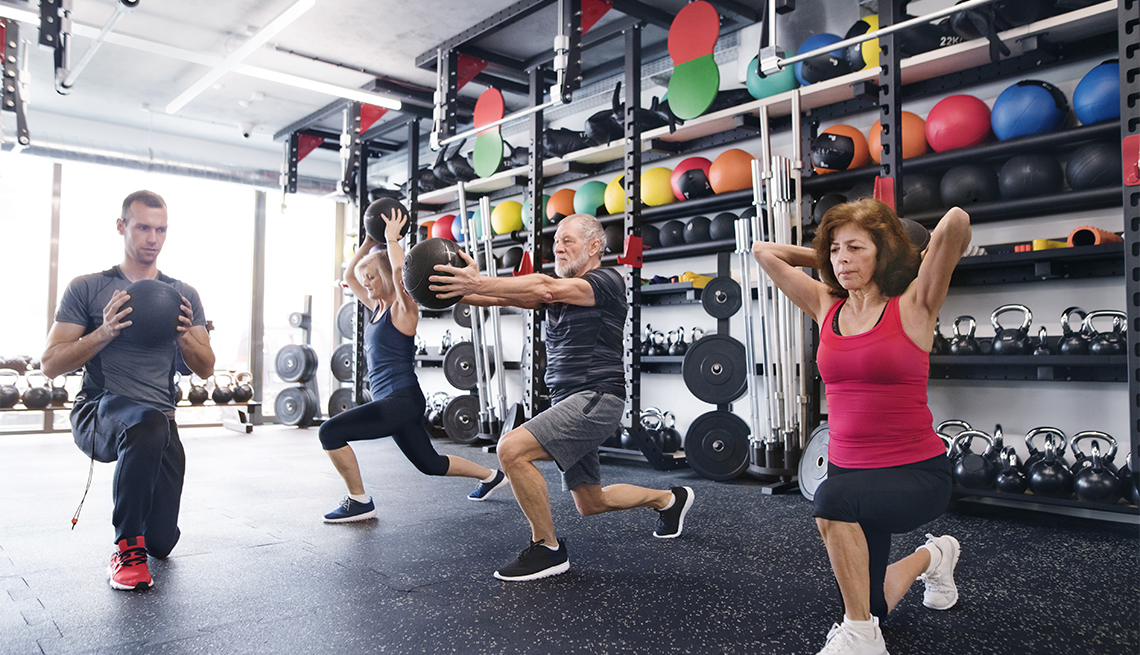 You already know that pumping iron builds muscle mass, which in turn can help stave off age-related weight gain. And you may have heard of its connection to longevity. But recent research shows that lifting weights also offers a bevy of other proven health benefits, from fending off depression to lowering your risk of type 2 diabetes. Among the surprising findings? That weight training may benefit your heart more than cardio workouts and that it appears to literally thicken a specific part of the brain — not unlike lifting dumbbells might build up a bicep — helping to fend off mild cognitive impairment, a precursor to Alzheimer's disease. Here are some other surprising benefits, which are great reasons to add a little strength training to your weekly routine.

Benefit No. 1: It boosts your mood

Resistance training may be protective against depression and anxiety, a new study published earlier this month suggests. When researchers examined 1,100 women ages 45 to 69, they found that those with low upper- and lower-body strength were more likely to show symptoms of both disorders. Another Harvard analysis of 33 studies involving more than 1,800 people, published in JAMA Psychiatry, found that those with mild to moderate depression who pumped iron at least twice a week saw significant reductions in their symptoms, compared with those who didn't. “We think it's so powerful both because it increases blood flow to the brain and it also releases mood-enhancing brain hormones such as norepinephrine and dopamine,” says JoAnn Pinkerton, M.D., director of the Midlife Health Center at the University of Virginia Health System in Charlottesville, Va., and executive director of the North American Menopause Society.

Benefit No. 2: It lowers your risk of type 2 diabetes

Resistance training builds muscle mass, which enhances insulin sensitivity. “There are two places your body stores carbohydrates — your muscles and your liver,” says Sheri Colberg-Ochs, professor emerita of exercise science at Old Dominion University in Norfolk, Va. If you don't have much muscle mass, those carbohydrates end up spilling out into your bloodstream, raising blood glucose levels, or being stored by your body as fat. “Most of the time, the fat ends up in your central abdomen, which makes you even more insulin resistant,” Colberg-Ochs adds. But if you have muscle mass, these carbohydrates can go into your muscles and get used through either aerobic or resistance training exercises. It doesn't take much to see results, either. Indeed, a Japanese study published this past March in the Journal of Diabetes Investigation found that when older people in their 60s engaged in low-intensity resistance training twice a week for 16 weeks, they had significant improvements in their blood glucose levels.

Benefit No. 3: It can prevent heart disease

Strength training may be even more protective for your ticker than aerobic exercise, according to a study of 4,086 adults presented last November at the American College of Cardiology. Best of all, you don't have to do a lot to see benefits. A study published last year, in the journal Medicine & Science in Sports & Exercise, revealed that less than an hour of weekly resistance exercise reduces risk of developing metabolic syndrome (a cluster of conditions, such as high blood pressure, high cholesterol and elevated blood sugar, that raise risk of heart disease) by up to 70 percent.

Benefit No. 4: It staves off dementia

Exercise has long been touted for its brain-boosting benefits, but resistance training in particular seems to be protective against MCI, a precursor to dementia. When researchers examined 100 adults between the ages of 55 and 86 with MCI, they found that those who did strength training twice a week showed significant improvement in their cognitive function after an 18-month period, compared with those who didn't. A 2016 follow-up study by the researchers, published in the journal Molecular Psychiatry, helps explain why. Resistance training appears to thicken the gray matter in a part of the brain that is often affected in early Alzheimer's disease; on the other hand, a control group had shrinkage in that area. “Lifting weights appears not just to help you build muscle, it seems to help you build brain cells, as well,” explains Barbara Resnick, a professor of gerontology at the University of Maryland School of Nursing.

Benefit No 5: It improves symptoms of chronic kidney disease

Almost 40 percent of people over age 65 have chronic kidney disease. One unfortunate symptom of this condition is muscle wasting, which makes it much harder for people to move around and affects quality of life. A study published last year, in the American Journal of Physiology, found that patients who did a combination of aerobic exercise and strength training three times a week saw significant increases in muscle strength and overall fitness levels, much more so than those who did just aerobic exercise. What's more, another study by the same researchers discovered that this combination of aerobic and resistance exercise can help relieve other symptoms of kidney disease, such as itching, shortness of breath, impotence and muscle spasms.

Benefit No 6: It keeps you on your feet

Falls are the leading cause of death among people older than 65, according to the Centers for Disease Control and Prevention, and weak lower-body strength, particularly around your legs, is a leading risk factor. “You really want to focus on the muscles that help you stand up and catch yourself if you fall off balance — your quads and gluteus, or butt muscles,” Resnick says. One large review of 17 studies, published in the British Medical Journal, found that older adults who participate in a fall-prevention exercise program that includes strength training see their risk drop by more than a third.

You don't have to jump into a CrossFit class to see such major health benefits. “Even relatively simple exercises such as a sit-to-stand or wall push-ups can go a long way, particularly if you're just starting to get back into shape,” Resnick says.

If you're brand-new to weight training, you can find simple moves on the National Institute on Aging website. If you're no stranger to strength training, though, try taking it up a notch. Interval training, where you alternate between, say, 40 seconds of weight lifting and 20 seconds of rest, has been shown to be particularly effective. Seventy-year-olds who participated in a 10-week interval training program, in which they gradually worked their way up from an 18-minute strength training workout to 36 minutes, lost about two pounds of body fat and gained a pound of muscle — almost triple that of a control group, according to a study published this past April in the Journal of the American Geriatric Society.