Editor's Note: For current information about benefits under the Affordable Care Act, visit Your Guide to the Health Care Law. To receive a personalized report about how the health care law can help you and your family, use the AARP Health Law Answers Tool. To shop for health insurance through the health insurance marketplace, visit HealthCare.gov.

En español | The looming presidential election is heating up the rhetoric on health care reform. But how much of it is true?

“The amount of misinformation about the Affordable Care Act [ACA] — including outright lies — is astonishing,” says Shana Alex Lavarreda, Ph.D., director of health insurance studies at the UCLA Center for Health Policy Research. “The point of the law is to make the health system better for each person, for less cost to society overall.” 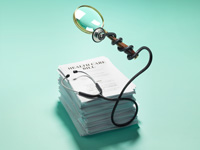 Get the facts about the new health care law.

But myths about the ACA abound. Some of the most persistent:

MYTH 1: The new law cuts Medicare drastically, so I won't be able to get quality health care.

The Affordable Care Act (ACA) in fact prohibits cuts to guaranteed Medicare benefits. There are provisions in the law to help curb the soaring costs of Medicare, but savings will come from reining in unreasonable payments to providers, taxing high-premium plans (beginning in the year 2018), cracking down on fraud and waste, and encouraging patient-centered, coordinated care, says Sara R. Collins, Ph.D., vice president of the Commonwealth Fund, a private research foundation focused on health care.

The ACA also covers preventive care designed to avert chronic conditions like heart disease and diabetes, which currently cost billions. Medicare beneficiaries get an annual wellness exam as well as numerous screenings and vaccines free of charge. The new system also improves coordination of care between doctors, nurses and other providers to prevent harmful and costly hospital readmissions.

Finally, the law closes the infamous Medicare Part D prescription drug "doughnut hole," in which Medicare beneficiaries paid full price for prescription drugs after exceeding a certain dollar limit each year. Now enrollees who reach the doughnut hole get large discounts, and by 2020, the hole will close.

MYTH 2: I've heard that Medicare Advantage plans will be cut or taken away.

The ACA does not eliminate Medicare Advantage plans, which are privately administered plans that provide benefits to about a quarter of Americans with Medicare. These plans were created to bring market efficiencies to Medicare, but they actually cost taxpayers 14 percent more per enrollee than the traditional Medicare program does. The ACA aims to bring costs back into line.

"The plans are still required to provide at least the same benefits as those available through traditional Medicare plans," says Stuart Guterman, vice president of the Commonwealth Fund. "And for the first time, the law ensures that plans that perform better will be paid better, so the care they provide should improve."

"If your current plan allows you to see any physician in the plan, nothing will change," says UCLA's Lavarreda. Health plans are already building bigger networks in anticipation of new patients, so choices could be even greater.

Although the law doesn't specifically address wait times, many of its provisions are aimed at improving quality of care, including some that encourage more physicians to become primary care doctors.

MYTH 4: If I have Medicare, I will need to get more or different insurance.

Some people have confused the ACA's "individual mandate" with a requirement to obtain additional insurance on top of Medicare. "That's just not accurate," says Guterman. "Medicare beneficiaries will continue to have Medicare, and there's no requirement that they get additional coverage beyond what they already have."

Next: Will the new health care law raid Medicare of $716 billion? »

As more provisions in the Affordable Care Act kick in, now’s the time to understand how the law can help you and your family. Prime Time Focus host Alyne Ellis has the details.

It's simply not true. The Congressional Budget Office (CBO), Congress' independent and nonpartisan budget scorekeeper, recently estimated that the changes to Medicare in the ACA will reduce spending by a total of $716 billion between 2013 and 2022.

"That's where the number comes from," says Guterman. The largest portion of these savings would come from changes to provider payments and correcting overpayments to insurance companies that offer private Medicare plans. "And that projected savings will be used to close the prescription drug 'doughnut hole'; to pay for free, preventive care for consumers; and to increase coverage for the uninsured," Lavarreda says.

All guaranteed benefits in Medicare were protected. These measures actually strengthen Medicare's fiscal viability: Before the ACA was passed, Medicare's Hospital Insurance Trust Fund, which is used to pay hospital bills for Medicare beneficiaries, was projected to run out of money by 2017; after the law was passed, that date was pushed back to 2024.

MYTH 6: The law is going to bankrupt America.

Not according to the CBO and the Joint Committee on Taxation, nonpartisan entities that estimated health reform will actually reduce the nation's deficit by $210 billion between 2012 and 2021, by reducing subsidies to private insurance companies, cracking down on waste and fraud, and reining in profits.

MYTH 7: The new law will drive up premiums astronomically.

That's an unlikely scenario. "A significant number of the uninsured people who will be brought into the system with the ACA are the 'young invincibles,' " says Brownlee, describing the 18-to-29 age group. "Their relative good health helps to subsidize care for less healthy people."

The law also strengthens states' power to question unreasonable rate increases, whether because of age, preexisting conditions or any other reason. And the law's "medical loss ratio requirement" dictates that 80 to 85 percent of premiums be spent on medical costs. As of Aug. 1, approximately 12.8 million Americans received an estimated $1.1 billion in rebates from insurance companies in cases where overhead expenses exceeded 15 to 20 percent of premiums charged in 2011.

As for Medicare Part B premiums (which cover doctors' services and outpatient care), those are determined by a formula designed decades ago by Congress, based on the previous year's Medicare health care costs. In essence, the government pays 75 percent of Part B costs, and Medicare beneficiaries pay the remaining 25 percent. The law did not change this formula. (There is no truth to a rumor that Part B premiums will rise from $99.90 a month in 2012 to $247 a month by 2014, Lavarreda says.)

MYTH 8: If I can't afford to buy health insurance, I'll be taxed — or worse.

If you can't afford health insurance because of financial hardship (if the cheapest plan exceeds 8 percent of your income), you will be exempt from the tax penalty. Special taxes (from $95 the first year to $695 a year by 2017) will be phased in over the next seven years for those who choose to forgo coverage. Even then, the government will not criminally prosecute or place property liens on people who ignore the tax. At worst, the IRS will withhold the tax amount from individuals' tax refunds.

Next: Will small businesses be fined for not providing health insurance to its employees? »

MYTH 9: I'm a small-business owner and I'll pay big fines if I don't provide health insurance to my employees.

Small businesses that already provide health insurance will not be affected. "Penalties for not providing health coverage apply only to companies with 50 or more workers," says the Commonwealth Fund's Collins.

In fact, many small companies will be eligible for tax credits to offset the burden of providing insurance. From now through 2013, eligible employers will receive a business credit for up to 35 percent of their contribution toward employees' premiums. For 2014 and beyond, the tax credit rises to as much as 50 percent of the contribution. These credits apply to companies with fewer than 25 full-time employees whose average annual salaries are less than $50,000. Companies with more than 50 workers that don't provide coverage will be subject to a fine of $2,000 to $3,000 per employee per year.

MYTH 10: The ACA basically turns our health care system into universal health care. So now some government bureaucrat will decide how and when I get treated.

Health care under the ACA will not be government run. "The law builds on and strengthens the existing private insurance system," says Collins. "Fifty to 60 percent of people will continue to get insurance through an employer, and people who are buying their own insurance will still buy private health plans. The choice of plan is not dictated, and you'll be able to choose the provider you want — no government bureaucrat involved."

The health care system envisioned by the law aims to be universal in one way: by making health insurance accessible to the vast majority of Americans. "That's a good thing," says Brownlee. "We'll have more people covered."

MYTH 11: If my state doesn't set up an insurance exchange, I can't get health coverage.

The ACA calls for each state to create an exchange, a marketplace of private health insurance companies. This will give individuals and small businesses a place to shop for affordable coverage, with subsidies provided, starting in 2014. But some states have declined to set up an exchange or have moved slowly.

"If a state hasn't done it, then the Department of Health and Human Services will set up an exchange in that state," says Collins. "Each state will have an exchange operated by either the state or the federal government. And tax credits will be available in your state, regardless of who is running it."