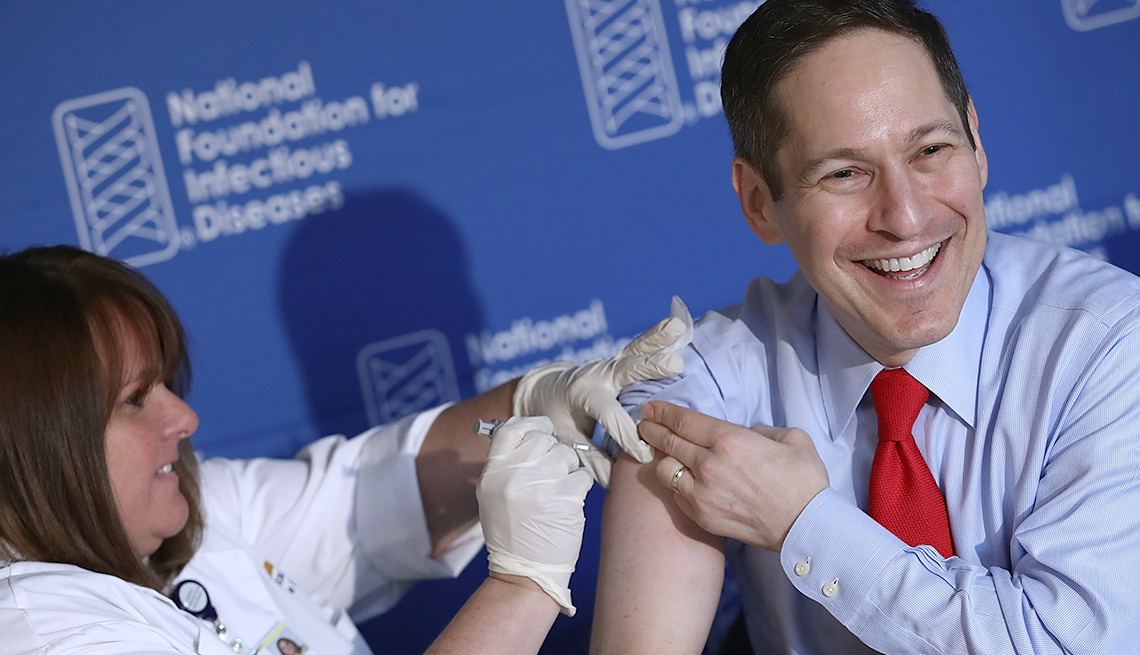 Dr. Tom Frieden (R), director of the Centers for Disease Control and Prevention has already received his annual flu shot.

En español | With flu season around the corner, health officials are worried that older adults aren’t getting their flu shots. New data from the Centers for Disease Control and Prevention (CDC) show that fewer 50-plus adults are getting vaccinated — a worrisome trend in an age group most vulnerable to dangerous complications from the disease.

Last flu season the vaccination rate for all Americans was 45.6 percent, a drop of 1.5 percent, but the largest decreases were seen among adults 50 and older. CDC officials reported a 3.4 percent drop among those ages 50 to 64 and a 3.3 percent dip among those 65 and older.

Although the flu can strike people of all ages, those 65 and older are disproportionally affected, according to infectious disease expert William Schaffner, M.D., of Vanderbilt University School of Medicine. By getting vaccinated, older adults not only reduce the chance they will get the flu but may also reduce the disease’s severity and complications if they catch it, Schaffner said.

There are two new vaccine options available this season, including one that protects against four strains of the flu and another aimed at those 65-plus that includes an “adjuvant” — an ingredient to increase the shot’s effectiveness by boosting the body’s immune response.

On a positive note, the CDC reported that more health care workers are getting vaccinated (79 percent last season, compared with 77 percent in the 2014–15 season), including more staff at long-term care facilities, whose flu shot rate went up from 64 to 69 percent. The vaccination rate among doctors hit an all-time high at nearly 96 percent.

Because the vaccine needs two weeks to take effect, officials urged Americans to get their shot as soon as possible. They also stressed the importance for those 65-plus to get a pneumonia vaccine, because pneumonia is often a deadly complication of the flu.

Here are more tips for making your flu vaccine as effective as possible:

Get your shot in the morning. A 2016 British study, published in the journal Vaccine, compared anti-influenza antibodies in the blood of 276 men and women over 65 who got a standard flu shot either from 9 to 11 a.m. or from 3 to 5 p.m. They found a significantly stronger response in those who were vaccinated in the morning. Researchers aren’t sure exactly why the time of day had an effect, but as one put it, it’s an easy, risk-free way to increase the shot’s benefits.

Do it by Thanksgiving. That way you’ll be prepared for the holidays, when germs can be spread at get-togethers with family and friends.

Cut your risk of hospitalization. There are many reasons to protect yourself against the flu, but here’s a big one: If you do get the flu, being vaccinated cuts your risk of being hospitalized by nearly 60 percent, compared with unvaccinated adults, according to a new CDC study.