High amounts of vitamin E — previously thought to lower men's risk of prostate cancer — actually raise the risk, according to a major new study that followed its subjects for up to a decade.

The results "are a bit surprising," in light of earlier research that suggested the supplements were beneficial, says Eric Klein, M.D., a Cleveland Clinic urologist who led the multi-center study. The results were published last week in the Journal of the American Medical Association. 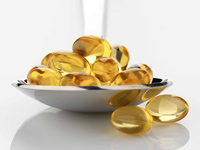 High doses of vitamin E aren't a replacement for exercise and a healthy diet.

Starting in 2001, Klein and his collaborators enrolled 35,553 healthy middle-aged men in the United States, Canada and Puerto Rico, randomly assigning them to take Vitamin E, selenium, both or a placebo.

The vitamin E dose used in the study was 400 IU (international units), 18 times the daily recommended dose of 22 IU for men. The typical multivitamin contains 15 to 25 IU of vitamin E, Klein says.

The men stopped taking the supplements in 2008 because there was no evidence they were reducing the cancer risk, Klein says. A long-term follow-up meanwhile showed that the group taking vitamin E had a 17 percent higher risk of being diagnosed with prostate cancer than those taking a placebo. (Selenium was not found to significantly raise the prostate cancer risk.)

The findings are especially worrisome considering that more than half of people over 60 take supplements containing vitamin E, and 23 percent take the 400 IU dose.

Vitamin E is an antioxidant — usually thought to discourage cancer — so doctors are puzzled by the results. Klein says scientists are studying the blood and DNA of the subjects to try and figure out what cellular changes took place to cause the increase in cancer.

An abnormal number of cancers were still being diagnosed well after the vitamin supplementation ended, Klein notes. "The public tends to think of vitamins as innocuous, like chicken soup," he says, "but they may not be, and even when you stop taking them, they have continuing biologic actions."

Instead of taking supplements, people without dietary deficiencies should exercise and eat plenty of fruits and vegetables, because they're packed with health-promoting nutrients, says Benjamin Caballero, M.D., a professor of international health and nutrition at the Johns Hopkins Bloomberg School of Public Health. "The evidence that you can reduce risk with dietary supplements is just not there," he says. "You cannot mimic a good, fresh salad with a capsule."

Consumers may not realize that the U.S. Food and Drug Administration does not regulate the $30 billion dietary supplement industry, Caballero says, meaning manufacturers need not prove their products are safe or effective. "Basically, you can operate from a P.O. box in Miami," he says.

Klein likewise cautions that people should not assume vitamin supplements are safe.

Also of interest: The anticancer lifestyle. >>