En español | Nursing home residents are most likely to fall within a few days of starting — or getting a larger dose of — a certain type of antidepressant, according to a new study recently published online in the Journals of Gerontology. 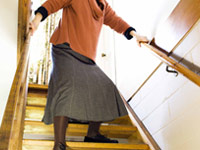 Older people are at high risk of falling after starting certain antidepressants.

"We identified a small window of time when nursing home residents are at high risk of falls," says Sarah D. Berry, M.D., a coauthor of the study and an instructor in medicine at Harvard Medical School. The increased risk of falls comes within the first four days of a prescription change in a type of antidepressant known as non-SSRI, or non-selective serotonin reuptake inhibitors. These include Effexor, Trazodone, Wellbutrin and Remeron.

The risk peaked within two days after a new prescription began or a current one was increased. In that time the risk of a fall, which can be debilitating and even deadly for older people, was five times higher than it was before the change. By the fifth day the risk drops off, Berry says. During that very specific four-day time frame, she says, the nursing staff should be extra vigilant and work to prevent falls.

That time frame is important, agrees James P. Zacny, professor in the Department of Anesthesia and Critical Care at the University of Chicago, who was not connected to the study. But he says demanding extra care even for a few days might be unrealistic given the chronic staffing shortages at most nursing homes. "In an ideal world, caregivers should look out for these folks and monitor them more closely [after a prescription change]," he says. Still, Zacny adds, the study's suggestion that prescription changes be avoided on weekends — when staffing is even more limited and the nurses are less familiar to the residents — might be helpful.

The study analyzed the records of 1,181 older residents — mostly women — in two long-term care facilities who had experienced falls. Researchers looked specifically at falls recorded up to seven days after a medication change.

Berry says it is not clear why the patient's risk of falling might increase with a change in the non-SSRI drugs, but it could have to do with the medication's effect on blood pressure or motor skills. By day five, she says, it's possible the body has adjusted to the changes.

While previous studies have linked another type of antidepressant — SSRI drugs like Prozac — with falls, Berry says her study looked at only a small time frame, and it could be that it takes weeks or months before these other antidepressants trigger a change that increases the risk of falls.