En español | If one drug’s label says “take twice a day,” and a second one says “take every 12 hours,” does that mean the same thing? And could you take both medications together? 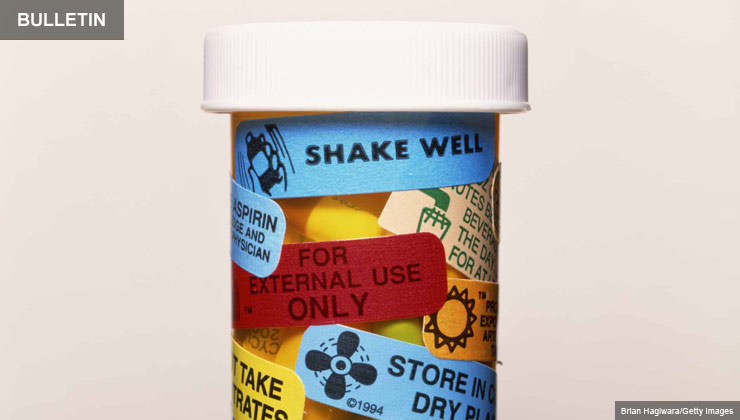 Confused about the instructions on your medication bottle? Ask your doctor.

An estimated 90 million adults in the United States misunderstand drug labels or have trouble following their directions, according to the Institute of Medicine.

Even more troubling is the predicament of many older adults who take several prescription drugs. For them, it’s even more difficult to create a simple schedule for medications with different label instructions.

A recent Northwestern University study of 464 adults ages 55 to 74 found that even when the directions for two drugs were basically identical — “twice daily” and “every 12 hours” — only about one in five realized they could take the drugs at the same time.

The research findings, published last year in the Archives of Internal Medicine, provide the latest reminder that confusing and vague medication directions can undermine treatment.

Compounding the problem is that an estimated 80 million Americans are particularly vulnerable, struggling to understand medical details and related complexities with limited health literacy skills. Among older adults specifically, low health literacy can boost the risk of poor health and even death compared with those having average skills, according to a review of nearly 100 health literacy studies published in the Annals of Internal Medicine.

“If it’s three times a day, that doesn’t tell you when to take it,” Davis says. “Is a day considered 24 hours or 12 hours? Do you wake up in the middle of the night to take it? Does the doctor expect that?”

Last year, the U.S. Pharmacopeial Convention, which sets drug standards, proposed new labeling standards designed to clear up the confusion. Among the USP recommendations: Use larger print to ease reading, replace medical terminology like “hypertension” with plain language like “high blood pressure,” and specify more precisely when to take a drug.

Next: Ask your doctor about these drug label directions. »

If the standards are finalized, they could be adopted by state pharmacy boards and other authorities this year.

For now, older adults should keep a summary chart of all their medications, and try to bring the containers to appointments. That way, they can be sure they are taking their drugs correctly.

Patients also shouldn’t be afraid to speak up if it’s difficult to take a drug because of conflicts with a work schedule or other lifestyle constraints, says Joanne G. Schwartzberg, M.D., director of aging and community health at the American Medical Association. Otherwise, she says, “The big worry is they will get discouraged and won’t try to take the medication. Or won’t take it correctly.”

Some directions worth asking your doctor about:

Take once (or twice) daily: Ask the doctor or pharmacist precisely when the medication should be taken, Davis says. Does twice daily, for example, have to be 12 hours apart, or is swallowing the pill sometime during the morning and evening OK? Be sure to check which meds can be taken together, she adds. By taking pills together, you’ll simplify what you have to do and when you have to do it.

Take as needed: Find out why your doctor has given you this flexibility, says Lee Ann Lindquist, M.D., a geriatrician at Northwestern University Feinberg School of Medicine. It may be because a patient prescribed a pain medication every four to six hours doesn’t need to wait four hours if he has intense pain, she says. One precaution: Don’t load up a pill container each week and take the “as needed” pills without a second thought.

Take with food: A full meal isn’t usually necessary unless the label specifies to take the medication at breakfast or dinner, says Bradley Williams, professor of pharmacy and gerontology at the University of Southern California in Los Angeles. Instead, you can eat a container of yogurt or another decent-sized snack — more than a few crackers — to protect against stomach irritation.

Take with water: It’s crucial to take some medications with lots of water. That’s true, for example, of osteoporosis drugs called bisphosphonates — including Actonel (risedronate), Boniva (ibandronate) and Fosamax (alendronate). At least 8 ounces of water are needed to wash down the pill and avoid any esophageal irritation, Williams says.

Limit sun exposure: Some medications, such as the antibiotics Bactrim and Septra, can react to sunlight, increasing the risk of severe sunburn, Williams says. But the warning “doesn’t mean you have to become cloistered,” he says. Check with your doctor, but typical sun precautions should be fine — limiting exposure and wearing protective clothing and sunscreen.

Avoid alcohol: Sipping a glass of wine or having a drink while taking some medications can cause side effects such as drowsiness, increasing the risk of accidents or falls, Williams says. And drinking while taking some narcotic pain meds, including Percocet or Vicodin, also can cause nausea or vomiting he says. Ask your doctor how much and when you can drink if the label says avoid alcohol.

Also of interest: Are you taking too many pain meds?