Concerned About Alzheimer’s Disease? How to Get an Accurate Diagnosis

For Latinos, barriers often get in the way of early detection. Here are 6 steps to discovering the cause of memory problems 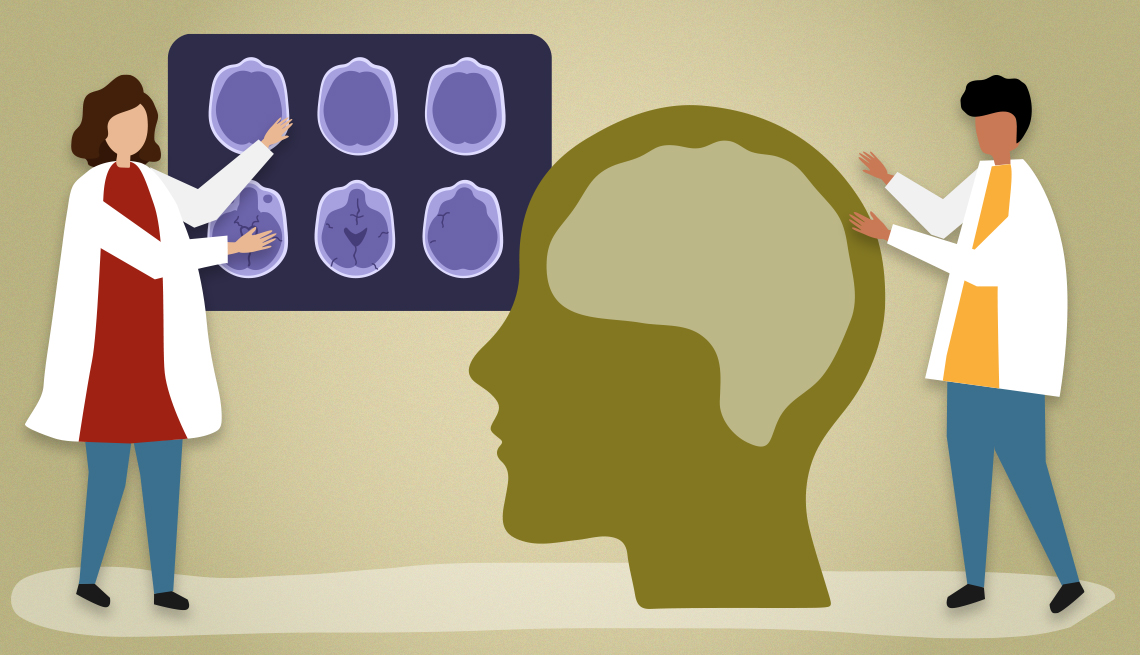 Latinos, the fastest-growing group of older adults in the United States, are one and a half times more likely than non-Latino whites to develop Alzheimer’s disease or another dementia, according to the Alzheimer’s Association.

To explain the disparity, researchers point to socioeconomic factors, limited access to high-quality care and a higher incidence of health conditions such as high blood pressure, type 2 diabetes and heart disease.

Yet despite having a higher rate of Alzheimer’s, Latinos are also more likely to have a delayed or missed diagnosis, according to an analysis published in in August 2021.

That’s significant, experts say, because detecting the disease early can lead to better treatment options and more time to prepare for the future.

“Early detection is critical,” says Jacobo Mintzer, M.D., a staff physician and principal investigator of Alzheimer’s disease research at the Ralph H. Johnson VA Medical Center in South Carolina. “We know that changes in lifestyle can substantially reduce your chance of progression of the disease. There are also a number of new compounds in the pipeline that will likely work best in the early stages of the disease.”

A variety of structural and cultural factors are keeping Hispanic Americans from being diagnosed sooner, experts say. 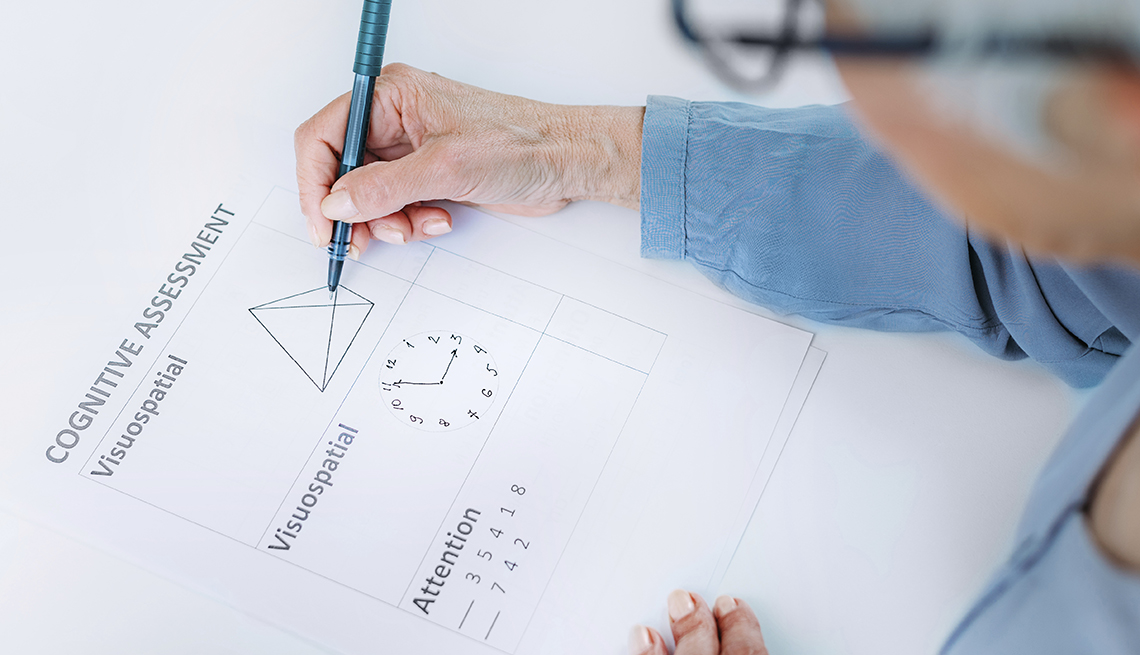 The Mini-Cog is a 3-minute cognitive assessment that includes a recall test for memory and a scored clock-drawing test.
MICROGEN IMAGES / Getty Images

In the Hispanic community, as in many other groups, there is a deep stigma around Alzheimer’s, with many people not wanting to acknowledge a problem. About 20 percent of Latinos say they would feel insulted if a doctor suggested a cognitive assessment, compared to 10 percent of non-Hispanic white Americans, according to the Alzheimer’s Association.

Because Latino cultures value respect for the elderly, some may feel it’s disrespectful to question an older adult’s actions when they start to show signs of impairment.

In addition, there is a widespread belief in the Hispanic community that memory problems are just a normal part of aging.

Structural barriers built into the American health care system also make it harder for Hispanics to get a diagnosis. Patients may not have the time to take off work to go to the doctor. They might lack transportation. Or they may not have health insurance.

“I hear things like ‘I can’t take the day off,’ ‘It’s going to be too expensive’ or ‘The waiting is so long,’ ” says Elizabeth Muñoz, an assistant professor at the University of Texas at Austin who researches predictors of adult cognitive health.

Once a Latino patient connects with a health care provider, other problems can arise. There can be language barriers, a lack of staff available who know how to diagnose dementia, and a general distrust of the health care system, says Maria Mora Pinzon, a preventive medicine physician and scientist with the Wisconsin Alzheimer’s Institute at the University of Wisconsin-Madison.

One-third of Hispanic Americans report that they have experienced discrimination when seeking health care, according to surveys conducted by the Alzheimer’s Association.

6 ﻿steps to take for getting a diagnosis

If you have concerns about a loved one with memory issues, experts say these six steps can help﻿.

While some forgetfulness is normal as you get older, experts say an important warning sign of Alzheimer’s is if you notice that your loved one is having a hard time doing things they used to enjoy. For example, if somebody always prepares breakfast for the family but now, “when they try to do it, it’s getting burned, it has too much salt or they forget the recipe, that’s reason for concern,” Mora Pinzon says.

Another warning sign: Behavior that is out of the ordinary — say your mom, who used to be very active, now stays in bed for much of the day. Compared to their peers from other ethnic groups, Latino patients with early Alzheimer’s are more likely to report anxiety and depression, according to the latest research. They’re also more likely to struggle with the activities of daily life, research shows.

If you’re worried about a family member, it’s important to voice your concerns in a supportive and loving way. Initiate the conversation in a calm and quiet environment, suggests Monica Moreno, senior director for care and support for the Alzheimer’s Association. Start by sharing what you’ve noticed, and ask if they have noticed changes too.

Latinos and Alzheimer's: A Growing Crisis

The latest research, getting a diagnosis, handling finances and coping with caregiving.

“That can really open the lines of conversation,” Moreno says. “A lot of times they may have noticed the symptoms, but they’re afraid to bring it up.” Since Alzheimer’s Association surveys show most Hispanics (57 percent) believe that significant memory loss is a normal part of aging, the conversation can include helping them understand that’s not true. No matter how supportive you are, the conversation may trigger feelings of anger, fear, shame or failure — so don’t be surprised if you meet resistance.

“As difficult as it is, it’s not a sprint, it’s a marathon,” Moreno says. “You may have to have multiple conversations over time before the person agrees to go see a doctor.”

For more tips on having this difficult conversation, the Alzheimer’s Association offers 10 steps, in both English and Spanish, about how to approach memory concerns in others.

Encourage your family member to share their concerns with their primary care doctor, and offer to accompany them to the visit. “Remind them that it may not be Alzheimer’s or dementia — maybe it’s just a vitamin deficiency,” suggests Mora Pinzon.

A physician can do bloodwork and perform other tests to determine if something besides dementia is causing their memory problems. In addition to a vitamin deficiency, possibilities include sleep apnea, an infection or the side effects of a medication. If the results of those tests are negative, some primary care doctors will initiate an Alzheimer’s screening themselves. Others will refer you to a specialist.

4. Find a specialist you are comfortable with

Several types of doctors screen and diagnose patients for brain disorders, including neurologists, psychiatrists, psychologists and geriatricians. Dementia diagnostic centers, Alzheimer’s Disease Centers or Alzheimer’s Disease Research Centers also do the screenings and typically have more than one specialist on staff.

For Hispanic patients, it’s important that the screening is done by a culturally sensitive doctor, ideally one from a similar ethnic background, Mora Pinzon says. Almost nine out of 10 Hispanics (more than 85 percent) say it is important for Alzheimer’s providers to understand their ethnic or racial background and experiences, according to Alzheimer’s Association research.

“I’d ask for a referral to a physician who understands brain disorders and who looks and sounds like me,” Mintzer says. “If there’s no Latino doctor, try to find a doctor who knows dementia, and educate them on the uniqueness of your loved one.”

If there’s a language barrier, make sure the center has Spanish versions of its cognitive tests as well as Spanish-speaking staff members to administer them, Mora Pinzon says. “If they say they will do the tests with a translator and translate as it’s happening, that’s not very accurate,” she says. “In that case, it’s worth looking for another place, where they can administer the test in the language of preference.”

5. Prepare for the testing

Because there is no single diagnostic test that can determine if a person has Alzheimer’s disease, doctors use a variety of tests and tools to make the diagnosis. Talking to your family member in advance about the different types of tests can help the appointment seem less frightening and overwhelming.

If your family member has anxiety and is scheduled for an MRI, ask the doctor to explain in advance what they should expect. Some facilities have audio systems that allow patients to listen to their favorite music during the scan, and that can be helpful.

Finally, make sure your family member eats breakfast before they go and is prepared for several hours of testing. “Depending on what tests they’re using and how complicated the case is, it can take a whole day,” Mora Pinzon says.

If you don’t think your loved one can handle a long appointment, Mora Pinzon suggests asking if the screening can be split over two appointments.

The Alzheimer’s Association, AARP and other organizations have a plethora of resources to help as you and your family member navigate through this stressful time. Start with these resources.

A growing number of health care, academic and advocacy organizations nationwide are recognizing health inequities and working to help bridge the gap for Latinos and other ethnic groups. The Alzheimer Association’s 77 chapters are actively involved in outreach to diverse communities, says Monica Moreno, senior director for care and support. “We are strategically working with chapters to reach out to community leaders and better understand what challenges they face when it comes to Alzheimer’s disease﻿ and what they feel like they need,” she says. “Our chapters then work with leaders to come up with a plan.”

Researchers are also working to better understand dementia and Alzheimer’s disease in Latinos and to include more Latinos in clinical trials. In addition, many organizations and advocacy groups, including AARP and the Alzheimer’s Association, now offer Spanish-language resources. They are also studying whether genetics and other biological factors impact the brain differently in different populations.

​Michelle Crouch is a contributing writer who has covered health and personal finance for some of the nation’s top consumer publications. Her work has appeared in Reader’s Digest, Real Simple, Prevention, The Washington Post and The New York Times. 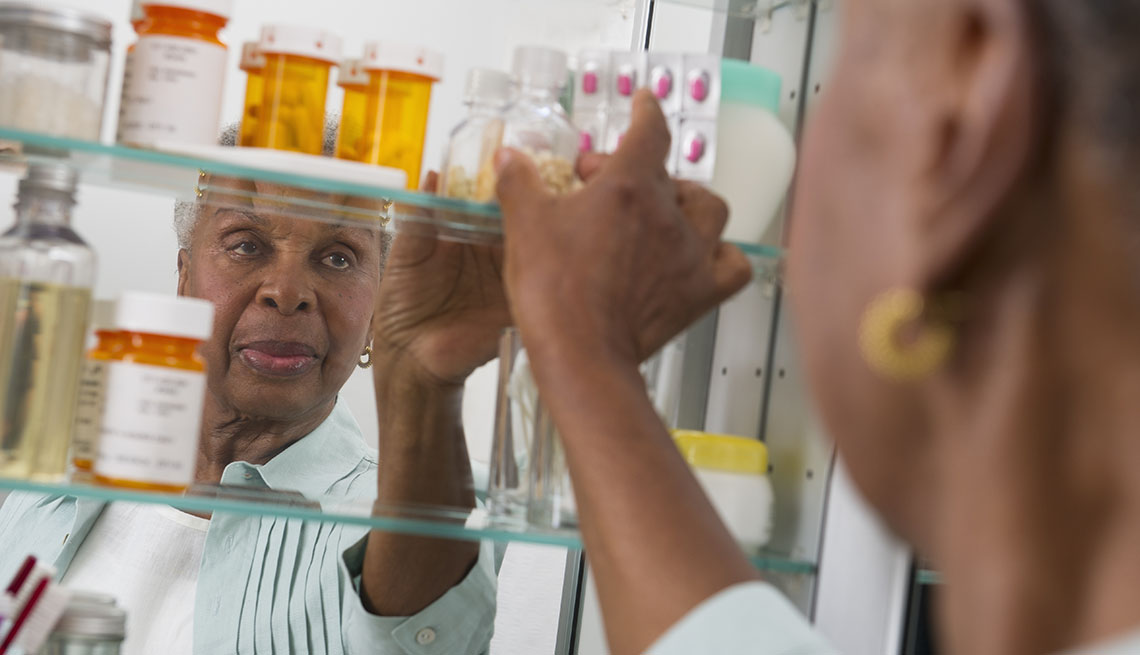 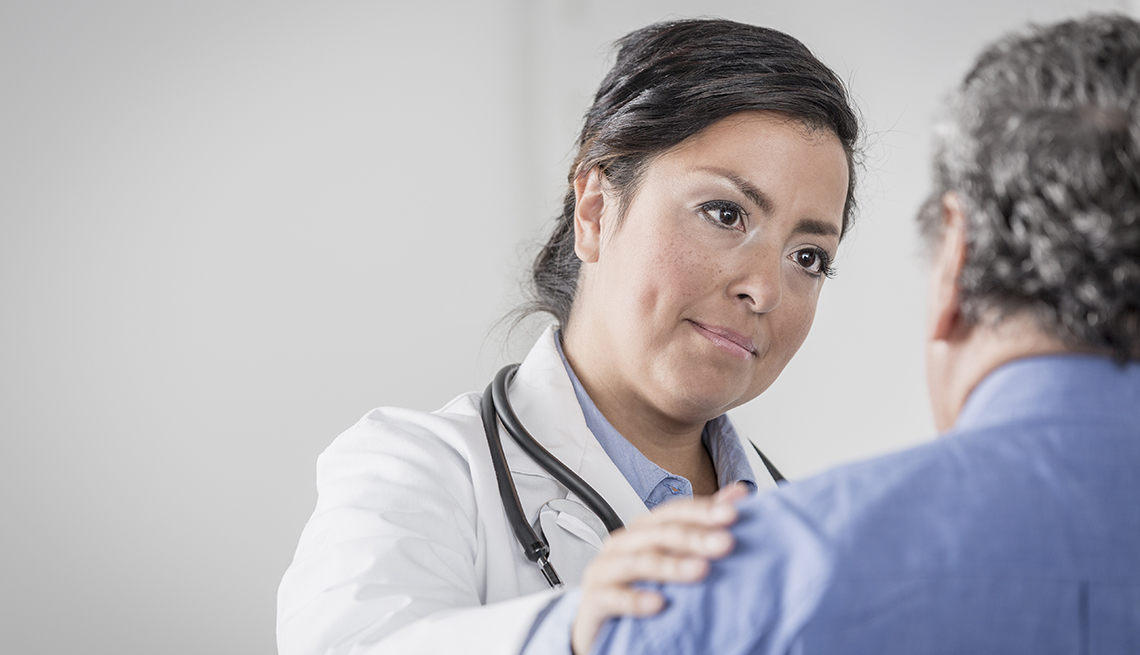 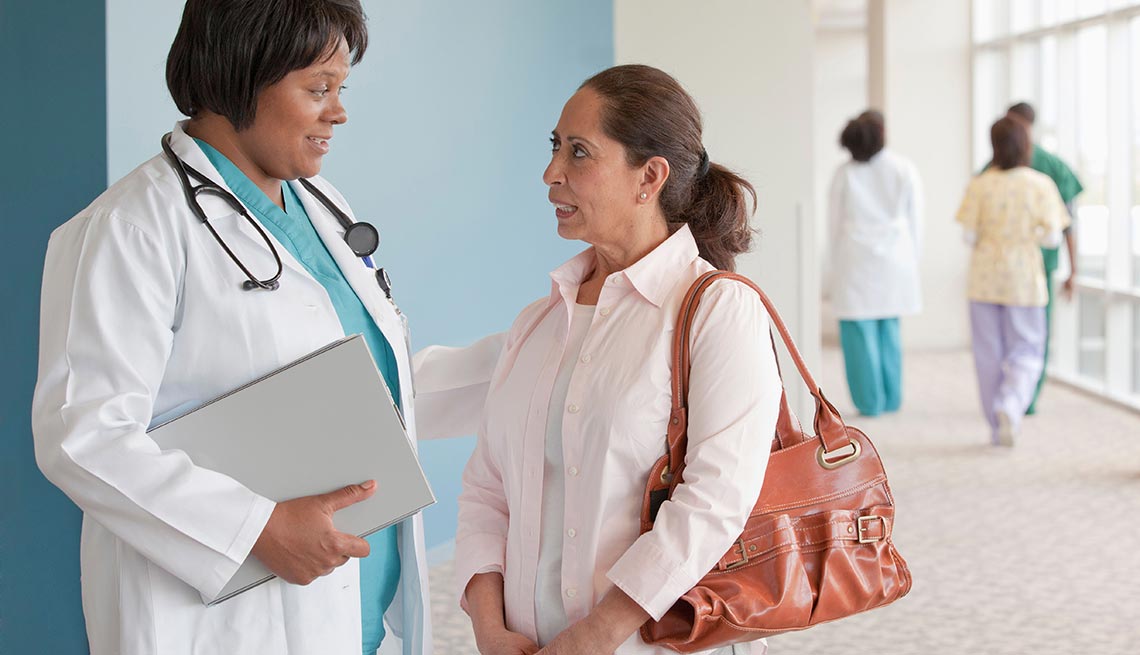 How to Find a Doctor Who Speaks Spanish