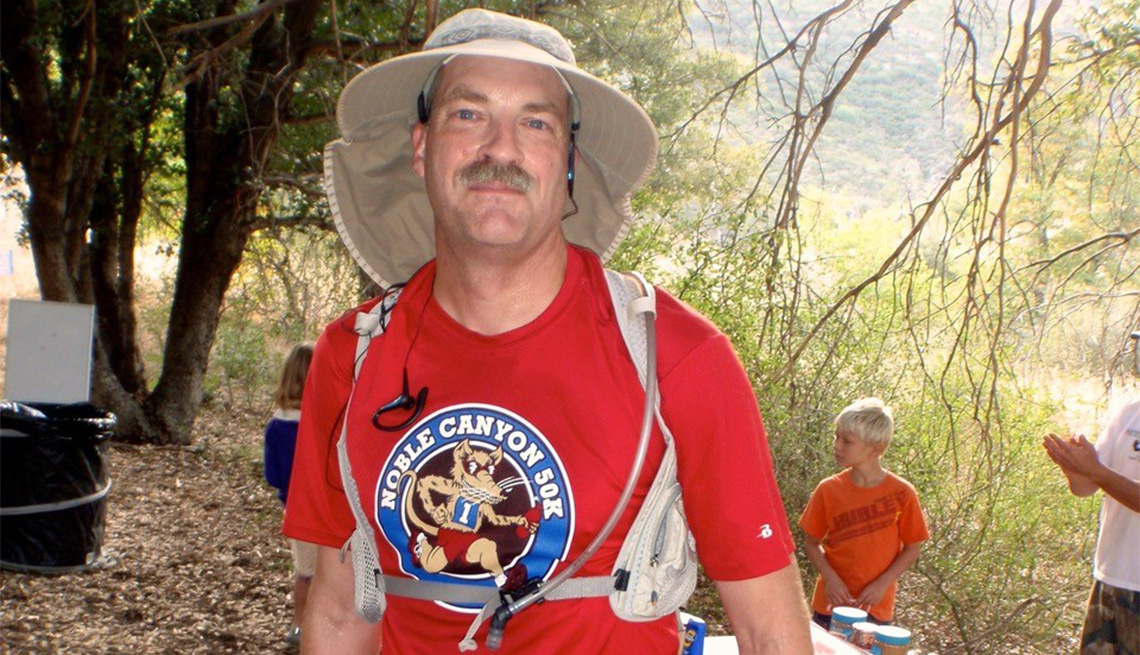 An avid runner, Spencer Moseley never thought he could have a heart condition.

Spencer Moseley is not the type of person you’d expect to have a heart problem.

A dedicated runner with 50 marathons under his belt, Moseley kept meticulous track of his pace while logging 45 to 60 miles a week. Usually, he kept a steady pace of 7½ minutes per mile with a heart rate of 140 beats per minute. But last year, he noticed that his heart rate was increasing. He thought he might be sick, so he scaled back. Or maybe it was just the stress of recent international travel, a transfer of his military-related job and a move. Still, the problem continued to worsen.

Moseley was due for an annual physical, and when he mentioned his symptoms, a nurse listened to his heart and gave him an EKG, an electrocardiogram. Then Moseley’s doctor told him he had a condition called atrial fibrillation — known as A-fib — and that he needed tests at a hospital right away.

Moseley’s condition, a quivering or irregular beat in the upper chambers of the heart, affects about 33.5 million people, including an estimated 2.7 million to 6.1 million in the United States. Researchers expect the number to double by 2050.

“A lot of people, when you say atrial fibrillation, they say, ‘I think I’ve heard of that,’ or ‘My grandfather had that.’ But people don’t understand how common it is today,” said cardiologist Jonathan Piccini, director of the Center for Atrial Fibrillation at Duke University Medical Center in North Carolina. “If you are older than 40 years old, there’s a 1 in 4 chance that in your lifetime you are going to get it. It’s very common.”

But as common as A-fib may be, it is not something to take lightly: Untreated, A-fib doubles the risk of heart-related death. It increases a person’s risk of having a stroke fivefold.

What causes the quiver?

Basically, each heartbeat is controlled by the heart’s electrical system. An impulse begins at the top of the heart and travels like a wave to the lower chambers, signaling the tissue to contract. In a healthy adult, a node in the top of the heart fires off between 60 and 100 beats per minute. The electrical wave moves through the atria to another node that acts as a kind of gatekeeper for electrical pulses going from the top to the bottom chambers.

But in A-fib, that electrical system malfunctions. The top chambers, the atria, don’t produce an effective regular contraction, beating either too fast or unevenly. When that happens, the heart fails to squeeze all the blood from one chamber to the next. That can leave blood to pool in the atria, which can increase the risk of clotting. If a blood clot forms, it can break off and lodge in an artery leading to the brain, blocking off blood supply, causing a stroke.

With weak or irregular contractions, a heart that’s in A-fib can allow blood to back up in the pulmonary veins, causing fluid buildup in the lungs, which causes fatigue and shortness of breath. And when oxygen-rich blood doesn’t get delivered to the body and brain, physical and mental fatigue can set in. Fluid also can build up in the feet, ankles and legs.

The many facets of A-fib

People who experience A-fib describe it in a wide range of ways — a painful thumping in the chest, a racing heart that leaves them gasping for air, a fluttering in the chest. Some feel dizzy or nauseated. But many people aren’t even aware of their symptoms.

Overall, most of the risks, symptoms and consequences of A-fib are related to how fast the heart is beating and how often rhythm disturbances occur. A-fib may be brief, with symptoms that come and go. It is possible to have an atrial fibrillation episode that resolves on its own. Or the condition may be persistent and require treatment. Sometimes A-fib is permanent, and medicines or other treatments can’t restore a normal heart rhythm.

The risk for A-fib increases with various stressors on the heart, including high blood pressure, heavy drinking, obesity and sleep apnea. It can be influenced by heredity and genetics and is more common with age.

After diagnosis, Piccini said he discusses three goals with his patients: preventing stroke, making sure the heart isn’t racing, and controlling symptoms. The treatment might include medicines such as blood thinners, lifestyle changes and surgical procedures.

On Oct. 3, three days after he and his wife closed on their new house in Virginia, Moseley had an ablation procedure on his right atrium, an upper heart chamber. In cardiac ablations, doctors typically use a catheter, threaded through the large veins, to help scar or destroy the exact tissue in the heart that’s causing the incorrect electrical signals.

While “destroying heart tissue” doesn’t sound like a good thing, this very common procedure saves countless lives each year. Catheter ablation is considered a procedure, not surgery, and typically takes three to six hours. Sometimes the procedure has to be repeated.

Since October, Moseley has had a second ablation and six cardioversions, in which doctors shock the heart to try to place it back into normal rhythm. He is scheduled for a third ablation in March.

It’s been tough for him, and for his wife, to get used to a new normal, with its slower pace, medicine and procedures.

“Everything outside my professional life was based on this running, being fit and being outside,” he said. “We scheduled vacations around it. I might run again, but never like I used to. That side of my life is now gone, and I have to go through a grieving process. I need to find something else. … I’m still waiting for that sunrise.”

Waiting for the sunrise. It’s become his mantra of sorts, to get him through darker times and the lonely overnight hours when his A-fib symptoms keep him awake. He’s been sharing his experiences, and his sharp sense of humor, on an online community board hosted by the American Heart Association and StopAfib.org, called My AFib Experience.

It’s not a sprint

Piccini, who sees patients at Duke as a cardiac electrophysiologist and studies A-fib as a researcher, acknowledges that the condition and all its unknowns can be scary. But “people with atrial fibrillation can have complete, happy and productive lives,” he said.

While in some cases A-fib can be cured, it’s most likely going to “be a lifelong traveling companion” that needs to be managed, Piccini said. And a growing number of treatment options and new research mean there are plenty of reasons for optimism.

That’s something Moseley knows quite a lot about. 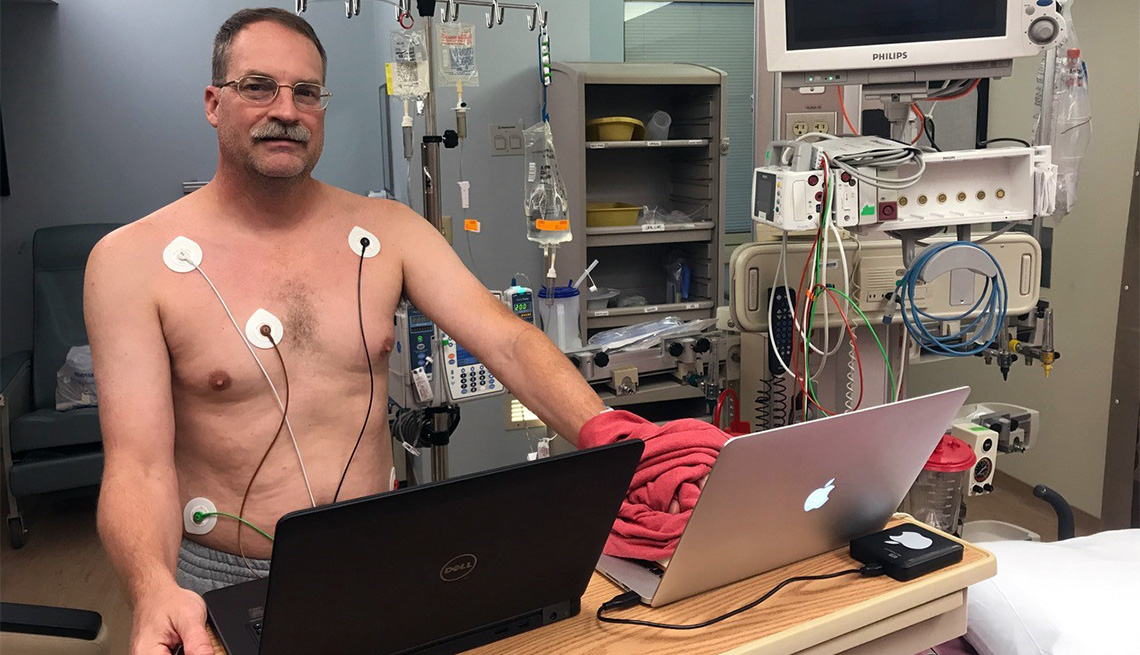 Since getting a diagnosis of A-fib, Spencer Moseley has had to adjust to a new normal, including a slower life pace, medicine and procedures.

If your doctor tells you that you have A-fib, it’s important to educate yourself on what that means, and what you’ll need to do. Here are some additional sources of support:

Language of the Heart: Essential A-fib terms and what they mean:

Ablation — A procedure in which a thin, flexible tube called a catheter is inserted into blood vessels and guided to the heart. Doctors use it to deliver radiofrequency, laser or cryotherapy to scar the areas sending abnormal electrical signals.

ECG or EKG — electrocardiography, a painless, noninvasive procedure that records the heart’s electrical activity and can help diagnose arrhythmias

To mark American Heart Month, AARP produced this article in collaboration with the American Heart Association, along with more articles, videos and quizzes available at aarp.org/hearthealth. To receive essential heart-health tips every day in February, download the AARP app or follow us on Facebook and Twitter. To stay up to date on the latest heart news all year long, check out the AHA's website, Heart.org.