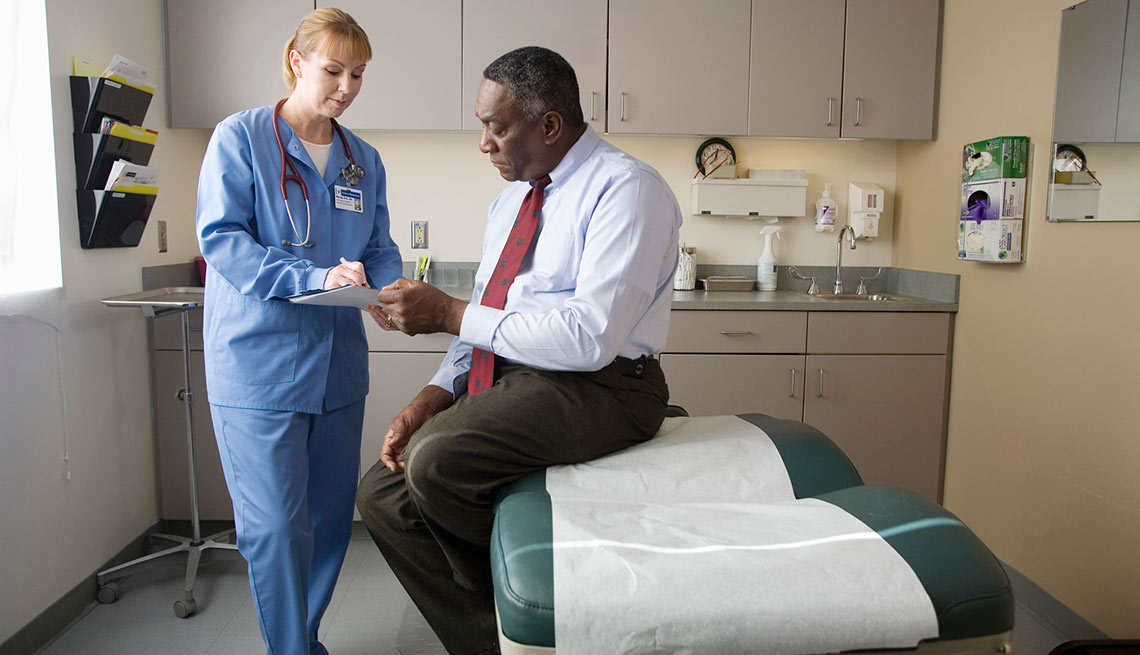 Men should talk with their doctor about being screened for prostate cancer.

A new study suggests that cases of advanced prostate cancer in the U.S. have soared, with the biggest increase among men ages 55 to 69, the group thought most likely to benefit from early detection and treatment, a new Northwestern University study reports.

Even more troubling, the researchers found that men diagnosed with an advanced stage in 2013 had a prostate-specific antigen (PSA) level nearly twice that of men similarly diagnosed in 2004 — an indication the disease had progressed much further before being detected.

The study published in Prostate Cancer and Prostatic Diseases, found that while early-stage cancers had decreased, the rarer, aggressive ones, where the cancer has spread beyond the prostate, had nearly doubled among men in their 50s and 60s.

The findings, however, were questioned by the American Cancer Society, which called them overly alarming. In a statement on the website, chief medical officer Otis Brawley, M.D., said the analysis of the data was too simplistic, looking only at the raw number of cases, but not the rate of increase. "A rising number of cases can be due simply to a growing and aging population among other factors," he said.

The study adds to the ongoing controversy over PSA screening for prostate cancer. PSA is a protein produced by prostate cells. A small amount of PSA in a man's blood stream is normal, but highter levels could indicate cancer.

In 2012, the U.S. Preventive Services Task Force (USPSTF) recommended against the PSA test, saying it could lead to unnecessary biopsies and damaging side effects. This was a significant change from the panel’s 2008 recommendation that only men age 75-plus not be tested. The result of the change, as a 2015 American Cancer Society study found, was a substantial drop in men being screened and a decline in early-stage cancer cases being reported.

Northwestern researchers, however, wondered if the change in screening practices might have affected the number of men found to have metastatic prostate cancer — cancer that has spread and is generally considered incurable. They looked at data on nearly 800,000 men diagnosed between 2004 and 2013. They found a decrease in early, low-risk prostate cancer cases, but a sharp increase in metastatic cases — from 1,685 in 2004 to 2,890 in 2013.

Whether the change in screening practices is to blame is still unclear, said Edward Schaeffer, M.D., chief of urology at Northwestern’s Feinberg School of Medicine and the study’s senior author. The increase could indicate either that “the disease has become more aggressive, regardless of the change in screening,” or that less screening is being done and so when men are diagnosed, “it’s at a more advanced stage of disease. We don’t know for sure,” he added, because advanced cases started increasing before the task force change its recommendation.

“The fact that men in 2013 with metastatic disease had much higher PSAs than similar men in 2004 hints that more aggressive disease is on the rise,” Schaeffer said in a statement, but also that men may not be screened as well due to the change in testing guidelines, he added.

Schaeffer disagrees with the task force’s recommendation because “it completely excluded the patient from the decision-making process,” he told the Chicago Tribune, “PSA screening saves lives, period.”

Others say the task force’s blanket veto of the PSA test ignores high-risk groups, including African American men, and the development of newer tests, including a new urine test.

Eric Klein, chairman of the Glickman Urological & Kidney Institute at the Cleveland Clinic, said doctors also have become more cautious about overtreating slow-to-develop early-stage cancers. “Both of these developments have gone a long way to addressing the concerns of the task force and reducing the harms of screening,” Klein told CBS News.

“This study has me very concerned,” Aaron E. Katz, M.D., chairman of urology at Winthrop-University Hospital in Mineola, N.Y., said in an email. “Without this simple blood test, more men will be diagnosed at an advanced stage of the disease, at which point it has spread outside of the prostate.”

The bottom line, said study coauthor Adam Weiner, is that “screening guidelines and treatment need to be refined based on individual patient risk factors and genetics. This may help prevent the growing occurrence of metastatic prostate cancer and potential deaths associated with the disease. This also can help minimize overdiagnosing and overtreating men with low-risk prostate cancer who do not need treatment.”

Men should talk with their doctor about being screened for prostate cancer, but here are the American Cancer Society guidelines for starting screening: