En español l The scientific term for an illness transmitted from animals to humans is zoonosis. Zoonotic diseases can be a nuisance, like ringworm or cat scratch fever, but some zoonotic diseases, such as Lyme disease and rabies, can cause serious, life-threatening illnesses. 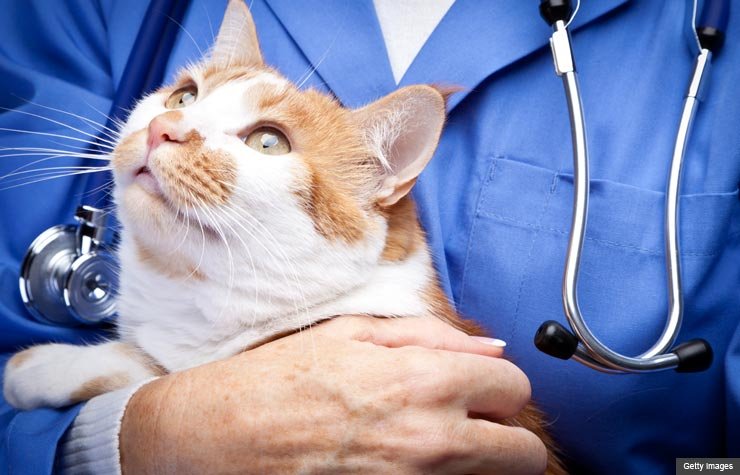 Even indoor cats can spread disease. Follow simple steps to protect yourself from zoonosis.

With our pets in the house, eating in the kitchen, prowling around countertops, and sleeping in our beds, we're at a much greater risk than ever from these diseases.

And it's not just dogs and cats that are health threats. From coyotes to mosquitoes, creatures great and small carry diseases that can spread to humans. So what can we do to protect ourselves and our families from zoonotic diseases?

Experts offer these nine simple steps to minimizing the risks of acquiring a disease spread by animals.

1. Be careful when purchasing a pet

Look for warning signs that an animal may be ill. It's not a good sign if a puppy is listless, a cat is losing fur or a bird is dropping feathers. Diarrhea in any animal is another telltale sign of illness. To avoid having to judge for yourself, choose a pet only from reputable sources, such as an animal shelter, a breeder who can guarantee that you have a healthy pet, or a pet store with a good reputation. Many parrots, for example, are smuggled into the country without being quarantined and treated for psittacosis (sit-a-co-sis), also known as parrot fever. Be sure any puppy or kitten has been treated for parasites before you buy it. People with compromised immune systems — such as those undergoing cancer treatments — should not handle or touch turtles, snakes or other reptiles, as they could transmit salmonella.

2. Take care of your pet's health

Most states require regular rabies vaccinations for dogs, cats and ferrets. Rabies is transmitted from the saliva of an infected animal, usually from an animal bite. Also make sure to deworm your puppy and have a veterinarian check for worms at least once a year. Canine roundworms can cause severe abdominal pain, vomiting and intestinal blockage in humans. Give your dogs a monthly preventive pill, such as Sentinel or Heartgard Plus, and spot-on medications, such as Frontline, for internal and external parasites, such as fleas and ticks. And don't allow your pets to roam free. They might have a run-in with disease-carrying wild animals, such as skunks, raccoons, foxes or coyotes.

Don't touch your pet's feces or urine with your bare hands. Discard dog or cat feces before it can foster infective forms of worms. Do it carefully with a pooper-scooper or while wearing disposable gloves.

Don't let dogs and cats do their business in sandboxes, on beaches or playgrounds.

Keep your cat's litter box clean. Wear disposable gloves and wash your hands after cleaning the cat's litter box. Cats can carry Toxoplasmosis, a disease that can sicken pregnant women or people with compromised immune systems. (If you're in this category, don't change cat litter. If you must, wear gloves.)

The same is true if you own a bird: Wear disposable gloves and wash your hands after cleaning its cage. David Schlossberg, M.D., an infectious disease expert with the Philadelphia Department of Health, tells of a 47-year-old woman and her 12-year-old daughter who became ill with headache, fever and coughing after handling their pet parakeets and cleaning the cage. They were both diagnosed with psittacosis (parrot fever). Luckily, they got better after taking an antibiotic, but the disease can lead to pneumonia and other complications.

4. No French-kissing your pet … and other nasty habits that will get you in trouble

We're surprised we even need to say it, but don't kiss your pet on the mouth or let it lick you in the mouth. "This is a very common behavior," says Schlossberg. Don't believe the old wives' tales about letting your dog or cat lick your open wounds or sores to help you heal — the opposite is true. Bacteria that lurk in the animals' mouths can cause severe infections, especially in open wounds. Also, be careful playing with your cat. A bite or scratch from your kitty can give you cat scratch disease. It's an infection transmitted by a bacteria called Bartonella henselae that comes from flea feces. Wash any scratches you get thoroughly with soap and water; check with your doctor if you receive a severe scratch. The disease is characterized in humans by pain, lymph node swelling and fever that often lasts several weeks, but usually goes away without treatment.

5. They're called wild animals for a reason. Leave them alone

Don't touch strays or wild animals because they are much more likely to have diseases that can infect you and your family. Especially, a wild animal "that acts 'tame,' stay away," says Marty Becker, lead veterinarian for Vetstreet.com, because such behavior is abnormal in a wild animal and may be a sign of illness.

It may be tempting to get up close and personal with that sweet milk cow or lamb, but some infections, such as those caused by E. coli, can be spread by cows, sheep, pigs and other farm animals. "If you must go, be fastidious about hand-washing after handling the animals." If you have young children in tow, keep a close eye on them because they often put their hands in their mouths, says Schlossberg. The same advice goes for county fairs, where more than 100 people — most of them children — were sickened last year with E. coli infection after being exposed to contaminated animals at the fair.

Wear a mask and rubber gloves when cleaning attics, old cabins or outdoor closets. These areas may have been infested with mice, which can carry the potentially deadly hantavirus.

People exposed to hantavirus can get the disease by breathing dust from rodent droppings, especially when disturbing their nests. The disease causes fever, chills, muscles aches and respiratory distress, and can even result in death. There is no known cure. Last year, three people died after being exposed to the hantavirus from mice in Yosemite National Park.

8. DEET is your friend

Use insect repellent with a high percentage of DEET — 50 percent is best; concentrations above 50 percent don't offer increased protection — to prevent mosquito bites when mosquitoes are most active, usually from spring to fall. West Nile virus is spread by wild birds to people and animals by the bite of a mosquito. DEET can also help protect you from tick bites that can transmit Rocky Mountain spotted fever and Lyme disease.

Wear shoes and long pants tucked into socks when walking in wooded places or fields with high grass and check your pet for ticks before entering the house. Ticks are killed by heat and dryness, not hot water, which is why the Centers for Disease Control and Prevention recommends immediately throwing your clothes into the dryer and letting them tumble on high for 30 minutes or more to kill any hangers-on. You should also shower when you come back indoors and rub with a washcloth to remove unattached, often unseen ticks. In the warm months, watch for the typical bull's-eye rash and flu-like symptoms of early Lyme disease. If ticks are found on your body, remove them by carefully pulling them out with tweezers and then incinerate them. Do not crush the tick between your fingers or kill it before removing it, as this could help spread the disease.

Judy Mandell is a freelance writer in North Garden, Va.