En Español l Something was not quite right — that much Maggie Kruger knew for sure.

In just six months, the then-40-year-old art gallery owner from Sarasota, Fla., had added 40 pounds to her tall, thin frame despite never wavering from her daily exercise and healthy eating habits. She also felt tired, her hair seemed to be thinning, her fingernails were dry and brittle, and her throat felt constricted. 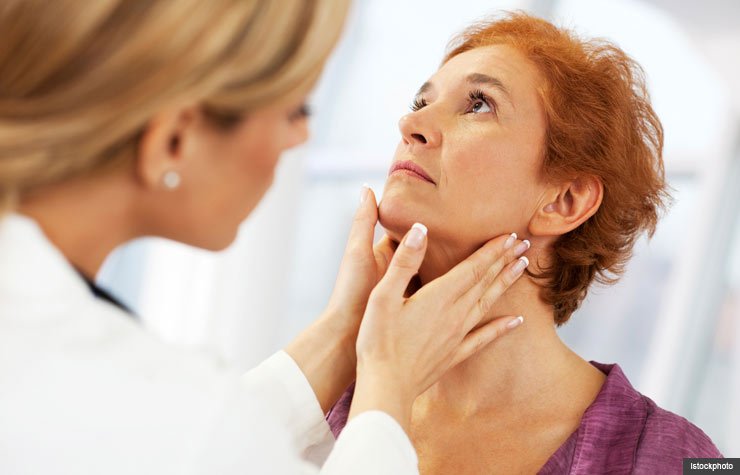 Women over 50 are at greater risk for developing hyperthyroidism.

But when she went to see her doctor, he told her she was just depressed and eating too much. He put her on an antidepressant.

"I had all the classic symptoms of thyroid disease, but he never tested for it," says Kruger, now 60.

Kruger's experience is all too common, according to the American Association of Clinical Endocrinologists (AACE), which has launched a new website, thyroidawareness.com, to help educate Americans about thyroid disorders. The association estimates that 30 million Americans suffer from thyroid conditions, and more than half remain undiagnosed.

In addition, women are seven to 10 times more likely than men to suffer from hypothyroidism, a condition where the thyroid gland is not producing enough hormone — which turned out to be Kruger's problem when she finally switched doctors a year later and was properly diagnosed. As she put it, "My thyroid just quit."

Unfortunately — as Kruger found — even after diagnoses, thyroid problems are not quite as simple to fix as some popular magazines and TV talk shows make it appear. And weight gain can't automatically be blamed on a faulty thyroid.

Despite its tiny size, the butterfly-shaped thyroid gland nestled in the lower front of your neck has a huge effect on nearly every aspect of our health, from weight to mood to heart rate to energy level. When the gland's hormone output is out of whack, the consequences can be wide-ranging and medication needs to be finely tuned, and regularly monitored, to avoid taking too much or too little.

While the symptoms of an overactive thyroid, called hyperthyroidism, are clear-cut — typically weight loss despite normal eating, anxiety and accelerated or irregular heart rate — the symptoms of an underactive gland, or hypothyroidism, can be vague and slow to develop, says Francesco Celi, M.D., a thyroid specialist with the National Institutes of Health.

The risk of developing hypothyroidism is greatest for women over 50, and the risk increases with age. The most common form is an autoimmune disorder called Hashimoto's thyroiditis, in which the body's immune system attacks the thyroid. It's an inherited condition, according to the AACE, that affects more than 10 million Americans, mostly women, and can remain undiagnosed for years.

People with hypothyroidism may not realize their thyroid levels are low because the symptoms can mimic things we typically associate with aging, like hair and skin changes, forgetfulness, constipation, sore muscles and lack of energy. It can cause cognitive impairment and depression in older people, Celi says.

Diagnosing and treating an underactive thyroid can be challenging, he says, especially when a patient's thyroid hormone levels test in the borderline-normal range. In most cases, a hormone level between 4 and 10 is the accepted range for treatment. When patients experience symptoms with a hormone level of 3, doctors are faced with the question of whether or not to treat. And it's a tricky question, because treatment is not just a matter of taking a little pill that immediately cures all your symptoms. Finding just the right amount of hormone replacement medication to keep levels stable can be a difficult balancing act.

In Kruger's case, it took her nearly 20 years to finally feel like "I got my life back." During that time, despite being on medication, her thyroid levels were still problematic. She continued to feel tired and to gain weight, her cholesterol levels shot up and she began developing heart disease, a consequence of insufficient thyroid.

Thyroid cancer diagnoses have increased from 17,000 in 2002 to 57,000 in 2012. Even so, it's still relatively uncommon and has a high survival rate — 97 percent after five years, says Jose C. Dutra, M.D., director of the thyroid surgical clinic at Northwestern University's Feinberg School of Medicine.

Dutra and other experts believe that the spike in diagnoses is due to the wider use of MRI and CT scans, which can detect tiny lumps that can't be touched. "Ninety percent of all enlargements are not cancerous," he says.

Finally, about six months ago, one of her doctors heard about a new type of thyroid drug and sent Kruger to Mark Lupo, M.D., a thyroid specialist in Sarasota. He prescribed Tirosint, a liquid gel cap form of levothyroxine sodium, the thyroid hormone replacement pill commonly used to treat hypothyroidism. (Tirosint was approved for the U.S. market in 2010.)

Although drugs can work differently in each individual, Tirosint's liquid form seemed to do the trick for Kruger: She dropped 20 pounds in six months. "And when I get up in the morning, I don't feel like someone has beat me with a stick," she says. More importantly, her heart problems have improved.

But, Lupo warns, women shouldn't be too quick to blame their weight gain on thyroid problems rather than on unhealthy eating habits or lack of physical activity.

"I see this every day, people who tell me, 'I'm overweight , I must have a thyroid problem,' " Lupo says. But people with thyroid problems may gain up to 10 to 20 pounds, he says. "Someone who comes to me weighing 300 pounds has other problems."

Lupo agrees with Kruger, however, that there does need to be more awareness of thyroid problems on the part of both patients and doctors. He's also convinced that older women particularly should be screened for thyroid function, which can be done with a simple blood test.

"I usually say that women should be screened before their first pregnancy and at age 35 and every five years after that, and every one to two years at age 50 and above," Lupo says. Because thyroid conditions are less common in men, but can develop with age, he suggests "men get screened at age 65 or if they have symptoms or risk factors."