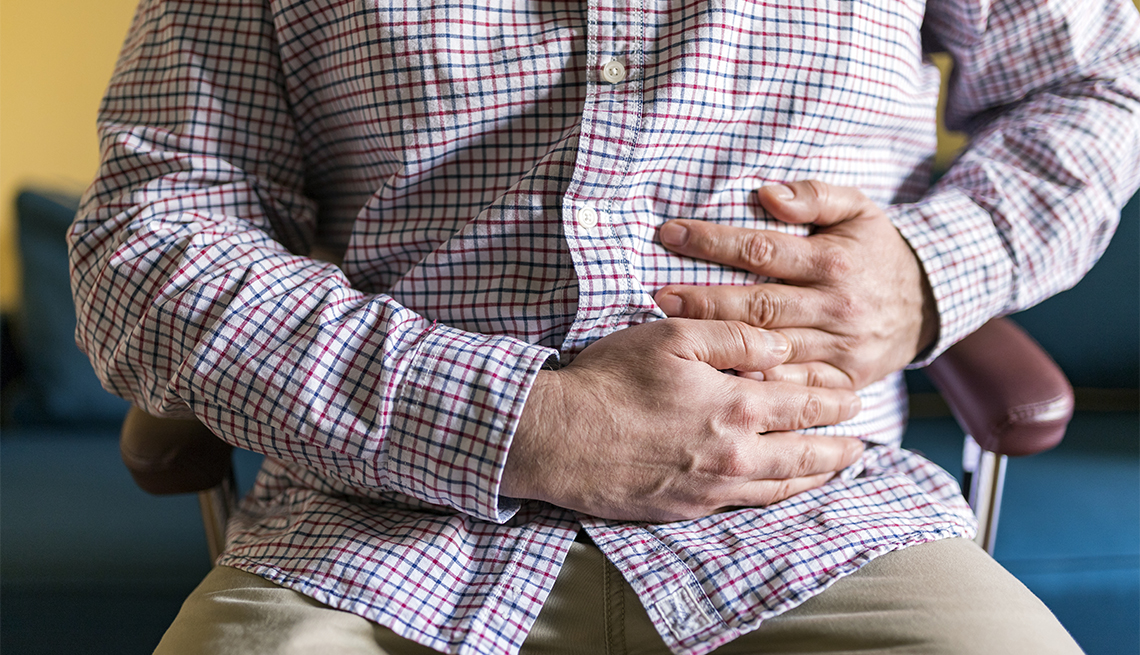 En español | Everyone has stomach issues from time to time, and occasional digestive discomfort is not usually something to worry about. That said, doctors note that there are a few gastrointestinal symptoms that you shouldn't write off, because they could signal something serious.

"I've seen many cases where patients have waited way too long before seeking medical attention,” says Christine Lee, a gastroenterologist at the Cleveland Clinic.

Here are five symptoms you should never ignore and what they may mean.

Blood in your stool

Whether it's bright red, maroon or black, seeing blood in the toilet can be frightening. Fortunately, it's usually not life-threatening, says Nicholas E. Anthony, a gastroenterologist at Atrium Health in Charlotte, N.C. The most common causes are hemorrhoids and anal fissures (tears in the lining of the anus). But blood in your stool can also be one of the first symptoms of colon cancer, especially if it's accompanied by a change in your bowel habits or the shape of your stool. Since colon cancer is more common among those over age 50, it's especially important for older adults to see a doctor without delay. Other possible causes of bleeding are colon polyps, inflammatory bowel disease, colitis and diverticulosis.

If you feel like your food is getting stuck in your throat or it hurts as it's going down, that can be a sign of something serious. “The big thing we worry about is esophageal cancer,” Anthony says. Esophageal cancer is more common in adults over 55 and three or four times more likely to occur in men than women, according to the Centers for Disease Control and Prevention. Other things that can cause discomfort when you swallow include an infection, an ulcer, a sore or scar tissue (which can develop if you have chronic acid reflux). In addition, a growing number of people are being diagnosed with eosinophilic esophagitis (EOE), a chronic allergic inflammatory disease that is a major cause of swallowing issues. To pinpoint the cause of your problem, your gastroenterologist will probably insert a tube with a camera attached to it down your throat in a procedure called an endoscopy.

Weight loss when you haven't changed your diet or exercise habits is a common symptom of many serious illnesses, including cancer, Lee says. “Most people gain weight as they get older because their metabolism slows down,” she says. “If you're losing weight without much effort, that's a red flag.” See a doctor if you've dropped 5 percent or more of your body weight within six to 12 months. Although it is a symptom of some types of cancer, a 2014 study published in the journal American Family Physician found that in patients over 65, such weight loss is often due to other causes, like peptic ulcers, celiac disease, inflammatory bowel disease or an overactive thyroid.

Chronic or prolonged constipation (especially if you're having pain)

Almost everyone experiences occasional bouts of constipation, and studies show that it's especially prevalent among older adults. Constipation is typically defined as three or fewer bowel movements per week. It may not seem like a big deal, but if your constipation isn't treated, over time the stools in your colon can become so large and solid that your body can't remove them — and that can be painful or even deadly, Anthony warns. “If it goes longer than seven days, I want to see you,” he says. Constipation can be caused by a wide variety of issues, including certain medicines, a diet low in fiber, and medical conditions such as irritable bowel syndrome, thyroid issues, diabetes or, in rare cases, colorectal cancer.

A sharp pain that doesn't let up can indicate acute appendicitis (if it's on your lower right side), diverticulitis or a serious infection. The context is important, Lee says, because muscle cramps and other issues can also manifest as sharp pain. “If you're an athlete rock climbing and you get a sharp pain in your abdomen that only lasts a second, you probably just pulled a muscle,” she says. If it's something serious, she explains, usually the pain keeps escalating and doesn't let up.

If you don't have one of the above symptoms, don't let that keep you from seeing a gastroenterologist if you suspect that something's wrong, Lee says. The earlier you detect a problem, the more options you have and the better your chances of success at managing it.

"The longer I do this, the more I realize that it doesn't matter what the textbook says — patients know their bodies,” Lee says. “If something is not normal for you, then it is a red flag, even if it's not on the list of top five. If something bothers you, you should get it checked out.”