Are Hormones Causing Your Weight Gain? 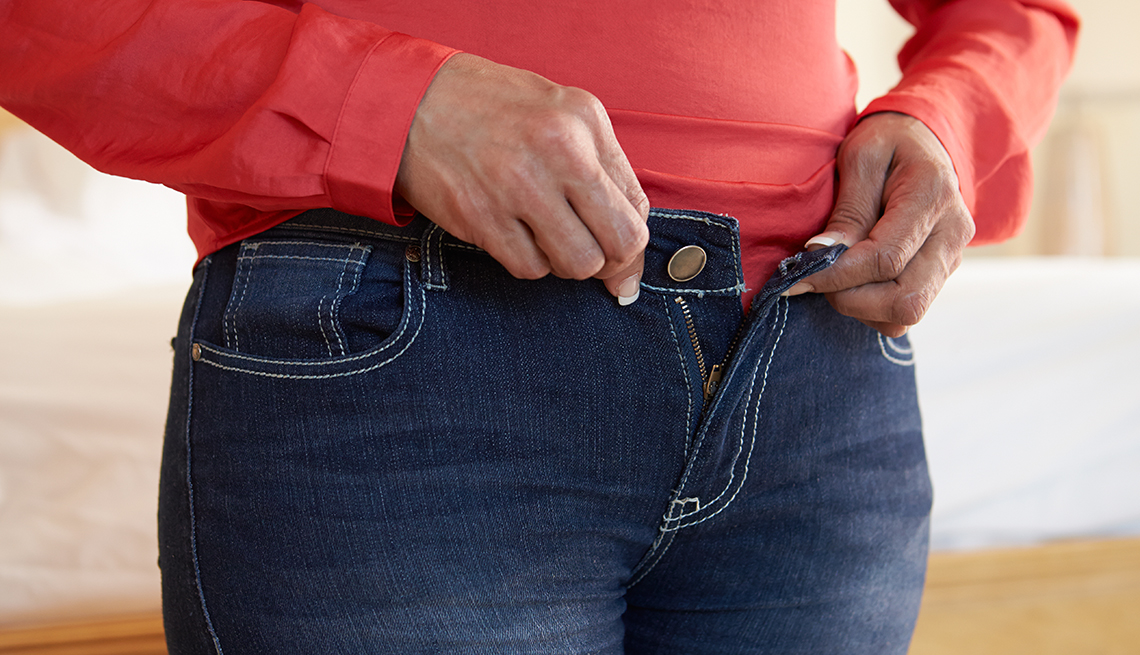 If you're like most Americans age 50-plus, your waistline is six centimeters wider than it was in your 20s or 30s, and the numbers on your scale reflect this, too. We can all tick off the reasons: genetic predisposition, supersized portions, too much sitting and not enough moving. But there's another theory circulating through the weight-loss world: hormonal imbalance. And “balancing” those hormones is the promise behind books like The Hormone Fix, diet programs such as BeBalanced Hormone Weight Loss Centers and countless dietary supplements like Female Balance or DIM, a compound marketed to men as a “testosterone protector."

To suss out whether your hormones are colluding with your fat cells, first a little Hormones 101. Made by our bodies, these chemical messengers have wide-ranging effects: controlling growth, developing sex organs, directing blood sugar levels and, yes, influencing body weight, body fat and muscle mass.

Levels of certain hormones change with age and they can occasionally cause weight gain, says Kenneth Burman, M.D., director of endocrinology at MedStar Washington Hospital Center and professor of medicine at Georgetown University, both in Washington, D.C. (Endocrinology is the medical specialty that treats hormone-related diseases.) But, he says, “For the vast majority of people who are overweight or have obesity, hormones are not main the cause.”

According to Burman and other leading endocrinologists, here is the complete list of hormones that may, or may not, affect your body fat as you age.

What they do: The thyroid, a gland that sits in the front your neck, releases hormones with wide-ranging effects — everything from stimulating fetal growth to regulating heart rate and body temperature to dictating metabolic rate (the rate at which you burn calories).

Hormone Rx: If you have either of these conditions (measured by blood tests for levels of thyroid hormones and thyroid-stimulating hormone — TSH), and your clinician recommends medication, here's what you can expect: “You'll probably return to your usual weight if you were hyperthyroid, and if you were hypothyroid, you'll probably lose a few pounds. But medication is not going to reverse a big weight gain because it's not likely a major cause of your weight gain,” says Burman.

What is does: One of the main sex hormones for women, the hormone triggers puberty in girls and regulates fertility. Estrogen also helps protect the cardiovascular system and bones and influences mood.

The body weight connection: Estrogen may affect your shape, nudging fat to the hips and thighs. “That's why, when estrogen levels plummet with menopause, women tend to gain more ‘visceral’ fat that lodges deep in the abdomen. But whether menopause itself makes you gain weight overall isn't clear,” says Burman.

Hormone Rx: Because menopause is a natural stage of life and not a disease, there's usually no need for hormone replacement therapy unless symptoms like hot flashes and insomnia are taking a bite out of your quality of life. “But this is a time to be extra conscientious about nutrition, calorie intake and exercise to keep visceral fat in check. In excess, this fat raises risk for heart disease, type 2 diabetes and other conditions,” says Burman.

What it does: The main sex hormone for men (initiating puberty and fertility and influencing body composition and libido), it also affects mood, cardiovascular health and more.

The body weight connection: Testosterone encourages muscle formation and tamps down body fat. Starting in a man's 20s and 30s, levels of this hormone naturally drop about 5 to 10 percent per decade. Does this drop drive up body fat? “Maybe just a little, but the research isn't definite on this. However, in hypogonadism, which is diagnosed by finding a low testosterone level in men with symptoms like low libido, depression or signs like anemia or osteoporosis, men tend to have a lower percent of muscle and a higher percent of fat, especially visceral fat,” says Joshua Thaler, M.D., associate professor of medicine in the Division of Metabolism, Endocrinology and Nutrition at the University of Washington.

Hormone Rx: If your testosterone levels are normal, do nothing. “Getting extra hormone probably won't change body composition and can have harmful side effects such as prostate enlargement and worsening cholesterol,” explains Thaler. But if you're diagnosed with hypogonadism, you should consult your doctor about the potential benefits of testosterone treatment. “It might take off a few pounds, especially around your midsection, but don't expect the treatment to completely reverse overweight or obesity,” says Thaler.

What it is: Leptin is derived from the Greek word for “thin,” because rising levels of this hormone signal the body to shed body fat. Leptin also helps regulate blood sugar, blood pressure, fertility and more.

The body weight connection: Emitted by fat cells, leptin serves as a recon system, alerting the brain to both gains and losses in body fat. As you pack on more fat, leptin levels rise, dialing down appetite while boosting metabolic rate — which helps put the brakes on weight gain. “But for reasons that are not clear, in people with obesity there's a breakdown in the signaling. They have high levels of leptin that aren't doing a good job of suppressing appetite,” Thaler explains.

The opposite happens when you lose body fat: Leptin levels drop. “This sends a starvation signal to the brain, prompting the metabolic rate to slow and appetite to increase. This was useful during times of famine, but it's definitely not helpful to people who are trying to maintain weight loss,” Thaler says.

Hormone Rx: In 1999, when a 9-year-old, 208-pound girl with a voracious appetite triggered by leptin deficiency received leptin injections, it was life-changing. Her appetite normalized and she began losing weight. “The study created a splash, but it turns out that leptin deficiency is extremely rare. And leptin injections don't do anything for the rest of the population with obesity,” Thaler says. Bottom line: There are no leptin therapies that work for obesity, at least not yet.

What it is: Called the “hunger hormone,” ghrelin is secreted by the stomach when you haven't eaten for a while, traveling up to the brain where it whets your appetite. It also helps keep things moving through your digestive tract and is involved in the cardiovascular system, immune system and mental health.

What it is: Released by your pancreas in response to the rise in blood sugar (glucose) after eating, this hormone helps spirit away excess glucose into muscle and fat cells. In muscle, glucose is burned as fuel or stored as glycogen. In fat cells, it can be burned, or converted to fat.

The body weight connection: Atkins, keto and every low-carb diet in between is based on the premise that eating carbohydrates raises insulin levels, which signals the body to store fat. Lose the carbs and you'll burn more of your body fat, the theory goes. “The problem is, the research doesn't bear this out. In fact, a National Institutes of Health study pitting a moderate-carb intake (50 percent of calories from carbs) to a very low (5 percent) high-fat diet found that after two weeks people lost more body fat on the moderate-carb plan,” says John Merendino Jr., M.D., assistant clinical professor at the George Washington University School of Medicine in Washington, D.C.

But insulin can be a problem if carrying too much — you guessed it — visceral fat. “This fat can release inflammatory compounds that make your body less responsive to insulin. Insulin resistance, in turn, appears to trigger more fat storage, in a vicious cycle,” Merendino explains.

Hormone Rx: To find out whether you might have a problem with insulin:

If any of these measurements are too high, your doctor will likely suggest you try losing weight with a sensible nutritious diet and increase your physical activity. “Make sure to get at least five servings of fruits and vegetables daily, which can help reduce the inflammation triggered by increased visceral fat,” advises Merendino. “The research clearly shows — and I see it all the time with my patients — that diet and exercise can reverse prediabetes and sometimes even type 2 diabetes.”

What it is: Dubbed the “stress hormone” because its levels rise with stress, it also has immune system and other benefits.

The body weight connection: Generally speaking, people with obesity tend to have higher cortisol levels than others. The hormone is also linked to a bigger waistline. Meanwhile, cortisol levels tend to be higher in people under chronic stress — the type that lasts weeks and months. “It's tempting to connect the dots and say that chronic stress raises cortisol levels, which packs on visceral fat. While there's some evidence for that, the research is still murky. It could be that stress is simply driving you to overeat,” Merendino explains.

Hormone Rx: “Researchers are investigating medications which may be of value in treating stress-related high cortisol levels as a cause of obesity, but currently there's nothing on the market approved for this,” says Merendino. But for now, if you think you're under chronic stress, find stress-management techniques that include exercise, meditation or activities with friends and family.

Managing Your Weight After 50

How can I lose a few pounds?

The 'Why' Factor in Weight Loss

Science shows it's a head game, and (the right) motivation really matters

How Mindfulness Helps You Lose Weight