En español | Most women find little to celebrate in menopausal hot flashes that yank them out of sleep in the middle of the night, the sheets drenched in sweat. But a new study suggests there really may be a silver lining.

Women who suffer menopausal symptoms are significantly less likely to get breast cancer than those who have no symptoms, the study found. And those with the most intense hot flashes — the kind that wake them up at night — are at lowest risk. 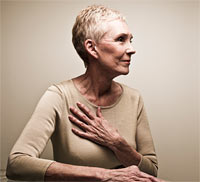 Researchers have much to learn about the link between menopausal symptoms and breast cancer risk.

The study, published in February's Cancer Epidemiology, Biomarkers & Prevention, is based on interviews with 1,437 women in the Seattle area and led by Christopher I. Li, M.D., an epidemiologist at Fred Hutchinson Cancer Research Center in Seattle.

Hot flashes, vaginal dryness and other symptoms experienced during the menopausal transition are related to falling levels of estrogen and progesterone as the ovaries shut down. These hormones play an important role in the development of breast cancer, but researchers have much to learn about this relationship.

Li says if the link between menopausal symptoms and reduced risk for breast cancer can be replicated, investigators can go to work untangling exactly what underlying process is protecting women with bad hot flashes — and use that as a basis for exploring new approaches to fighting breast cancer.

"Women who have these more severe symptoms may have some different kind of hormonal state in their bodies than those who don't have the symptoms," he says. It could have to do with the rate, magnitude or timing of hormonal change, for example. "That's what we really don't understand."

The study included women ages 55 to 74 diagnosed with breast cancer between 2001 and March 2004, along with a group of matched control women. Compared with symptom-free women, those who reported hot flashes and other symptoms saw a 40 to 60 percent reduction in their risk of the two most common types of breast cancer. This reduced risk continued in women who had taken hormone replacement therapy and those who had not, and regardless of age at menopause and weight, all of which affect breast cancer risk.

Whatever beneficial process those night sweats signaled, the impact seemed to last. Says Li, "We saw the same protective effect 10 to 20 years postmenopause."

So the suffering in menopause appears to have a payoff.