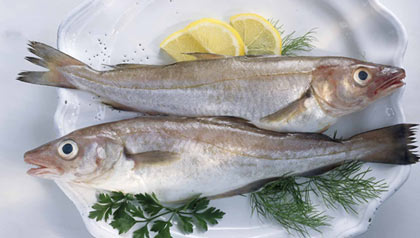 Research shows that eating baked or broiled fish can reduce risk of Alzheimer's.

En español | Chalk up another win for fish as brain food.

People who eat baked or broiled fish at least once a week may improve their brain health and cut the risk of developing memory problems or Alzheimer's disease, according to a study presented at the Radiological Society of North America's annual meeting in Chicago.

Researchers at the University of Pittsburgh selected the records of 260 participants in the Cardiovascular Health Study who were in their mid-70s and who had no problems with memory, thinking or reasoning. The researchers then looked at fish consumption and found that 163 of these men and women ate fish regularly, with the majority of them including it in their meals one to four times a week.

Ten years later, three-dimensional MRI brain scans were obtained for each participant. The researchers then did a brain mapping analysis on these scans that measured gray matter, which is crucial to brain health. "This is a mathematical way of understanding the influence of fish intake on the brain," says Cyrus Raji, M.D., the lead author.

Taking into account factors such as age, sex, physical activity, obesity and education, the researchers determined that people who ate fish weekly had large amounts of gray matter in areas of the brain that are related to Alzheimer's and mild cognitive impairment, a subtle but measurable memory disorder.

Although previous studies have linked eating fish to brain health, the researchers say this is the first study to establish a direct relationship between fish consumption, brain structure and Alzheimer's risk.

"Specific areas of gray matter in the brain are smaller in people with Alzheimer's because the disease slices away at these regions cell by cell," says neuropsychologist James Becker, a senior author of the study. If you start out with stronger, larger brain cells, however, it will take longer before the disease destroys so many cells that behavior and thinking start to change, Becker says.

Many people say that Alzheimer's is genetic and there's nothing you can do about your genes, notes Becker. "That's true. But even if you're destined to develop Alzheimer's you can delay the point at which the disease shows its face," he says. "Look at it this way. If you drive a four-cylinder car and one of the cylinders blows, you're in a lot of trouble. But if you drive an eight-cylinder car and a cylinder blows, you may not be in good shape but you can still get to where you're going. This is the biological equivalent of building in an extra four cylinders so that even if something goes wrong you've still got a lot of oomph left."

The researchers noted that regular servings of baked or broiled fish promote stronger brain cells in gray matter by making them larger and healthier; greater volume could reduce the risk for a five-year decline in mental skills by almost fivefold.

Although the study didn't identify the specific kinds of fish participants ate, past research ties fatty fish such as salmon, mackerel and herring, which are rich in omega-3 fatty acids, to brain health. Scientists already know that eating these fish can protect the heart. It turns out that they also protect the brain. Fried fish, on the other hand, provides no such benefits. "Frying changes the chemical composition of the omega-3 fatty acids, causing them to break down so there's less available," says Becker.

"There's a growing awareness that what we eat can affect our brain," says Scott Small, M.D., a Columbia University neurologist who was not involved in the research. "This interesting paper is a critical first step in pointing out a link between eating fish and reducing the risk of cognitive decline."