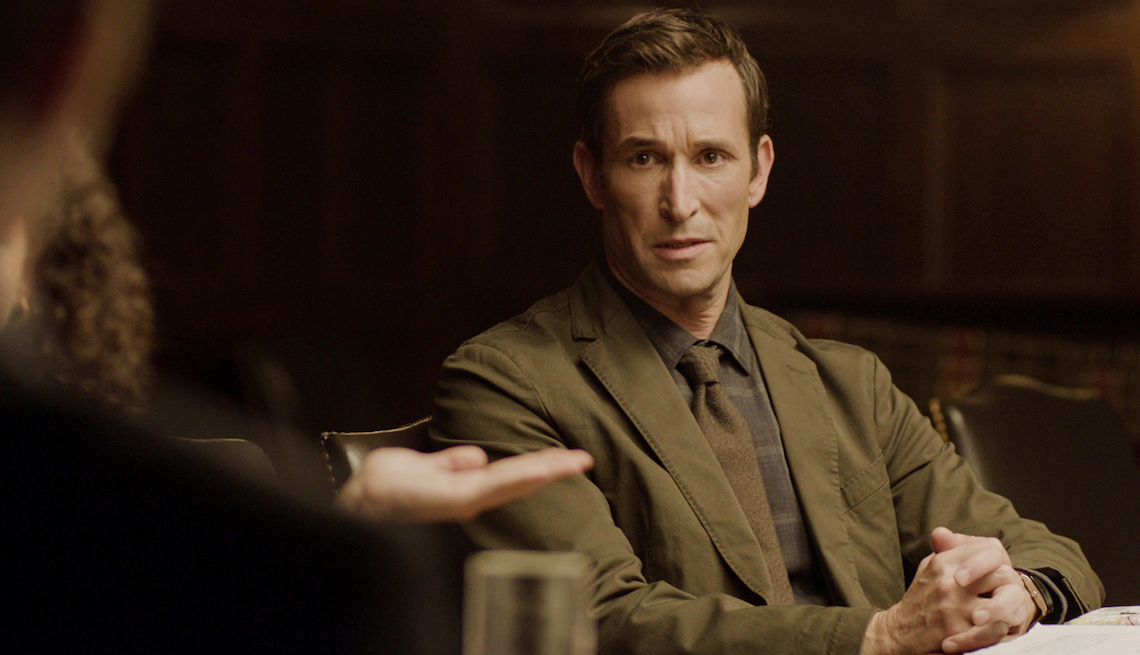 In the decade since NBC's hospital hit ER ended, Noah Wyle, 47, who got five Emmy nominations as the babyfaced Dr. Carter, grew up onscreen, playing an alien-fighting professor in Falling Skies, the Indiana Jones-ish Flynn Carsen in the Librarians series, and Steve Jobs in TNT's Emmy-nominated Pirates of Silicon Valley. Now he's returned to Chicago for his favorite post-ER role: Daniel Calder, the husband of a black doctor tragically shot by a white cop in Ava DuVernay's eight-episode drama The Red Line (CBS, premieres Apr. 28, 8 p.m.)

Wyle talks about family, turning 50 and how his name, Noah, defines a side of him.

The two great loves of my life are the two women that I actually pursued doggedly — they didn't pursue me. Similarly, the two best jobs I've ever done are the ones I really went after: I went after ER tenaciously, and I went after The Red Line from the second I read the script. I just had this quiet confidence that I could do something very special with it.

The Red Line feels torn from today's headlines. We were in Chicago on the South Side as the Laquan McDonald [police shooting] verdicts were coming. Our show could not have been more at the epicenter of this issue. I was just clinging on with both hands to make sure I didn't get thrown off.

Back to ER streets

Talk about getting older ... I went to Chicago thinking, “I love this city, this city loves me — I won't have to pay for a drink the whole time I'm here. But whoa, it ain't the ‘90s anymore. It's a different world. ER is a lovely memory for me and for many, many people, but If you're under 30 you don't know that show. The city is wonderful, as vibrant and embracing and exciting and freezing as ever.

I'm in a pretty strong state of denial. I've always been the kind of person who could start going to the gym just a month before a job, and then you can eat whatever you want, but that's not true with my metabolism or energy levels anymore. I have to exercise pretty much every day, to keep that base level of health. My wife hates my birthdays because she says I'm the biggest curmudgeon on the planet — I don't want to do anything about them. And then I get really angry because nothing happened. The day after my 50th birthday, I'll be the saddest 50-year-old, because nothing was done for my birthday.

I've never been to Scotland or Ireland. I have lineage in both those places. That might be a nice trip.

My wife, a couple years ago, got me into Pilates, and I got my parents into it. My dad is turning 80, and I know that Pilates has put another 10 years on both of their lives. The fact that they do it together has made all the difference. Building strength and balance gives you confidence when you move. I know for older people the fear is always about falling. My father-in-law teaches tai chi to older people for that very reason. It's almost a fall-prevention technique. On both sides of my family, I've got great examples to show me there's a way ahead with movement and core strength. And laughter and joy. Those seem to be the key ingredients to aging well.

I play the percentages in most things in life, and I've just applied that a little more doggedly with food. I really watch the amount of saturated fat and sugar that I eat to keep me on the straight and narrow.

Honestly, the best thing that keeps me young is a 3-year-old daughter who demands that I chase her. It's like Rocky II, when Burgess Meredith makes Rocky chase the chickens. That's me every day, except my chicken is a 3-year-old girl named Frances.

When you're born with the name Noah, there's this cellular burden placed on you to take care of the creatures of the earth. We have sort of a love ranch — we rescue animals that need homes: chickens and pigs and goats and horses and a cow. None of them are very productive.

Watching ER with his kids

They refer to it as “the doctor show you did before we were born.” I watched the pilot, for the first time in 18 years, with my 13-year-old daughter, and she liked it, but not enough to watch any more. The most profound thing about watching it with her is that I look at Dr. Carter's face, and he's so much closer to her in age than he is to me, and he looks just like her. I knew the pilot was good, but I forgot how good it really was.