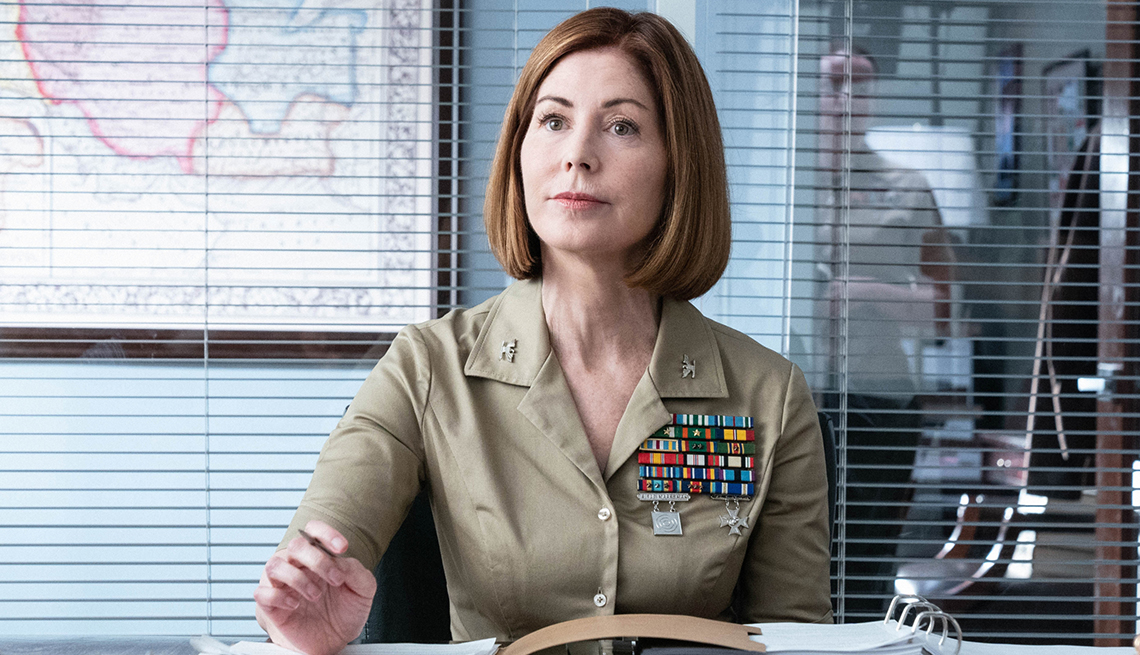 Dana Delany stars in the CBS show 'The Code.'

“Lucky.” That’s the word Dana Delany, 63 — star of The Code (CBS, premieres April 9, 9 p.m. ET), the latest military police procedural inspired by the success of AARP-viewer favorites JAG and NCIS — uses over and over to describe her career, highlighted by two Emmys (for China Beach) and two Screen Actors Guild nominations (for Desperate Housewives' ensemble). She tells AARP about her new detective role's inspiration, the East Coast vs. the West, and why True Detective should go with female leads (listen up, HBO: Delany would return your call).

On loving what you do

I’ve been very fortunate. I’ve never had a lull in my career. I attribute that to just that I love what I do. This show is on CBS, traditionally their audience is older, so I’m kind of in the age range of their audience, and networks are trying to build younger audiences. But I feel like saying, ‘Hey, why not give the audience that you have what they want?’ That should be a strong focus. Why not?

She loves to be the boss

I liked that my character [Col. Elsa Turnbull, the commanding officer of the Marine Corps’ Judge Advocate Division, one of the highest‐ranking female officers in the Corps] was the boss. She's running things. Obviously, the military has been very good to me. I’ve never played a lawyer before [in a regular role]. I find it challenging because it’s not the way my brain works. On China Beach, I was a nurse, which was a very different function that comes from empathy.

On playing tough lawyer Elsa Turnbull, who tells one character, “I’ve ordered better men than you to their deaths — I will end you on my way into yoga."

With a lawyer, you work from the neck up. It’s strategy. I thought that would be an interesting challenge for me to work that way because I just don’t think that way.

This is CBS so it’s a little more traditional.  The last show I was on, Hand of God , was for Amazon. That was a little bit looser and, obviously, you could use swear words, you could be more sexual. You have to tell a good story. That’s the bottom line.

How to stay healthy at work? Have mat, will travel

I do my yoga every day, for over 30 years. If I can’t do it one day, I really feel the difference. If I know I’m shooting the next day, I don’t have wine the night before. That’s depleting. I’m so lucky I come from a family of good sleepers. I love eight hours. I can go more.

My alternative was to be a private detective [if acting didn’t take off]. I’m actually really good at it. I read a lot of crime novels when I was a kid, John D. MacDonald and Ross Macdonald. My favorite character growing up on television was Honey West — I don't know if you remember Anne Francis. It had such an impact on me that I wanted to be her. In fact, I was her for Halloween. I had a little mole and everything. So I wanted to do that. I went on a tour of Quantico when I was a kid and they didn’t have female FBI agents. So I thought, “I'll be a private detective.”

HBO, her line is open

I haven’t played a private detective, and I would love to. I wish HBO’s True Detective  would have female detectives. They should.

I’ll go anywhere. I just did this mini-series in Brazil about Theodore Roosevelt. l played his wife Edith. This is the third project I’ve done there. I love going to Europe. I've been to most of Southeast Asia. Paris is probably my favorite city of all. I just discovered Scandinavia. I still have things that I want to go see. I feel like I got to do it because time is running out.

On her devoted fans

One girl from Pittsburgh, Abigail Philips, wrote me this long letter when I was on China Beach . She was maybe 9 at the time. She came to see me three times last fall when I did an off-Broadway play and I got to meet her. She’s an adult woman now. She’s lovely. I never met her before. With Twitter, you definitely have a wider awareness of who your fans are. I find people from all over the world on Twitter. It’s not always the safest thing, but for the most part, it's been great. Women came this summer to see the play from Italy, from Scotland, fans of mine from Desperate Housewives and Body of Proof also. [That proves the power of] very strong female roles for girls.